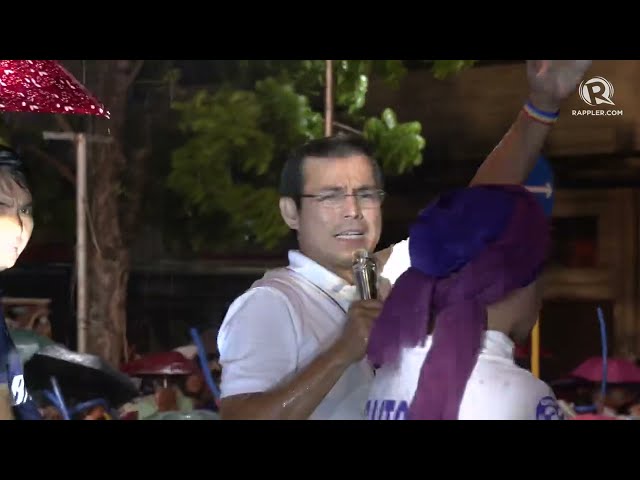 Facebook Twitter Copy URL
Copied
The Manila Mayor gets a rousing welcome in the cities and towns of Misamis Oriental, despite the weather

CAGAYAN DE ORO, Philippines – Manila Mayor and presidential candidate Isko Moreno’s spirits could not be dampened by the rain and lack of major political endorsements in Misamis Oriental.

As he visited two cities and two towns in this Northern Mindanao province on Monday, March 28, proof that he had gained a following was on the streets. From his first stop of the day in Gingoog City to his last in Cagayan de Oro, locals of all ages and backgrounds flashed the two joints sign and screamed his name.

Watch a recap of Moreno’s eventful day in this video report.

He held well-attended town hall meetings in Medina, where he has the backing of the vice mayor, and Balingasag. His motorcade in Cagayan de Oro was swarmed by people in the streets surrounding Cogon Public Market. His evening campaign rally in Divisoria Plaza, Cagayan de Oro was cut short by heavy rain but a big crowd stayed put to listen to him despite the downpour. Moreno, touched by their loyalty, stepped into the rain in solidarity with his drenched supporters.

Though high in energy and emotion, the day did not yield major political endorsements for the Manila mayor. Misamis Oriental Governor Bambi Emano, who has not yet endorsed any presidential bet, did not give his sweet yes to Moreno. Cagayan de Oro Mayor Oscar Moreno had previously declared support for Vice President Leni Robredo, as did Misamis Oriental Representative Juliette Uy and her slate.

Can Isko muster enough support from ordinary people to make up for the lack of political backers? – Rappler.com