PITCH TO CAVITE. Isko Moreno speaks at a rally in Kawit, Cavite. 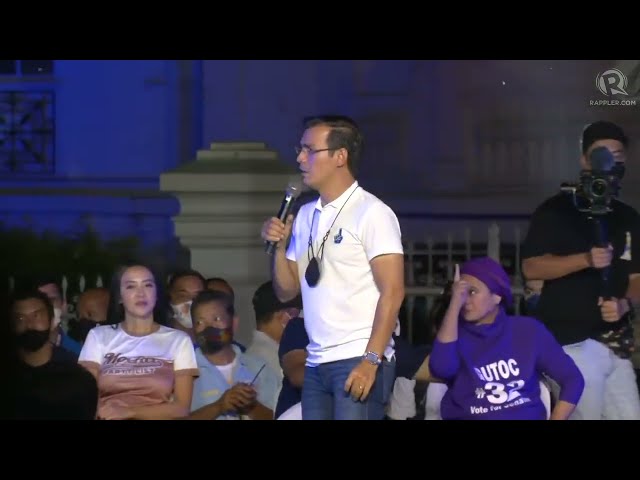 CAVITE, Philippines – In a province tagged by its own governor as “Marcos country,” Manila Mayor and presidential candidate Isko Moreno made his most stinging remarks against Ferdinand “Bongbong” Marcos Jr.

Moreno, in a speech on Friday, March 18, in Kawit, Cavite, blasted Marcos for his family’s failure to pay P203 billion in estate tax deficiencies and for being missing in action during the worst of the COVID-19 pandemic.

(The person who tries to earn a living pays his taxes even if it weighs heavy on them. But the person who inherits wealth even hides it and refuses to give part of it. Is that the kind of leader you want?)

As in past public remarks, Moreno did not mention the name “Marcos.” He was quick to tell the audience he was not out to attack a candidate but only to engage in “real talk” with them about their options.

The 47-year-old Manila chief also made a dig at presidential candidates who were not helping out during the early months of the pandemic.

(Where have you seen someone who, during the pandemic, was always missing, absent? Vacationing. Keeping a diary. How about the people?)

Any doubt that Moreno was coming for Marcos was laid to rest when he began slamming “unity” or “pagkakaisa” as a platform. Marcos has been panned by many for his constant claim of being able to “unify” the country while skipping debates and fora where he would face tough questions about his platform and stances on various issues.

Cavite is a key battleground for all presidential candidates because its 2.3 million registered voters make it the second most vote-rich province in the country, after Cebu.

But its governor, Jonvic Remulla, endorsed Marcos and promised him 800,000 votes. Supporters of Vice President Leni Robredo, meanwhile, sought to challenge Remulla’s “Marcos country” tag by staging a massive rally for her in General Trias City.

Moreno said he’s not worried by Remulla’s pledge to Marcos.

(It’s still just a promise. What’s important to me is the people…. There’s nothing wrong with courting, let’s court votes, because nothing is final yet.) – Rappler.com