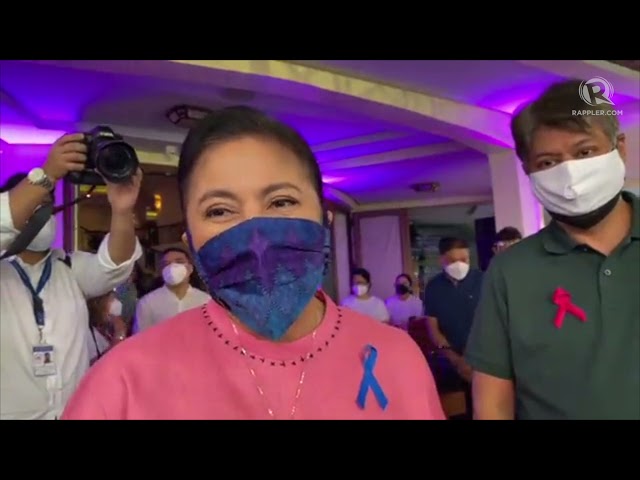 It wasn’t easy for Vice President Leni Robredo’s daughters to accept that their mother would again be mounting a national campaign for the 2022 elections.

The Vice President, as opposition leader, is often the subject of attacks. Her three daughters, Aika, Tricia, and Jillian, would have wanted that she return to private life.

“Mahirap, as in mabigat na mabigat for them (It was difficult, it was very heavy for them),” Robredo told reporters on Friday, October 8.

When her name was floated as a presidential candidate, Robredo said her daughters reminded her, “Mama, may promise ka ha na last na ‘yan (you promised that would be the last),” referring to her 2016 run.

But as in her past decisions to seek public office, the sense of duty prevailed.

(They know this is the right thing to do. They know that despite it being a heavy burden, they will support it 100%.)

In announcing her candidacy on Thursday, October 7, Robredo had said she was not only a mother to her daughters, but also a mother figure for other Filipinos suffering under Duterte’s rule.

(I am a mother who has seen the suffering of my beloved nation. This is what I believe in: Love cannot just be measured by sacrifices, but one’s readiness to fight, no matter how hard, to put an end to these sacrifices. A person who loves someone must fight for her beloved.) – with reports from Mara Cepeda and Sofia Tomacruz/Rappler.com