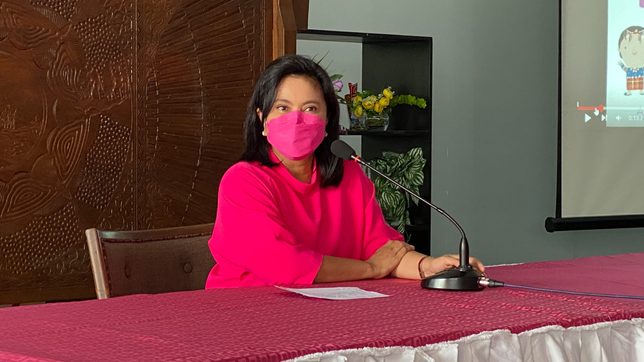 2022 ELECTIONS. Vice President Leni Robredo holds a press conference at the University of Baguio in Baguio City on December 6, 2021.

Facebook Twitter Copy URL
Copied
Vice President Leni Robredo says Manila Mayor Isko Moreno has the right to pick his own allies. But people's choices, she adds, are a reflection of their aspirations.

BAGUIO, Philippines – Vice President Leni Robredo said Manila Mayor Isko Moreno, one of her opponents in the presidential race, is free to adopt President Rodrigo Duterte in his Senate slate, but this choice is a “reflection” of his values and aspirations in the 2022 elections.

This was how the Philippine opposition leader reacted when asked by reporters in a press conference in Baguio City about Moreno’s openness to including Duterte in his senatorial slate. The Manila mayor even said he would be voting for Duterte in 2022.

Duterte has long been drawing flak locally and internationally for waging his bloody war on drugs, now the subject of a crimes against humanity probe by the International Criminal Court. The President has also been notorious for making crass and sexist remarks in his winding speeches.

Robredo said she is “very proud” of her own senatorial ticket, adding that these aspirants reflect the set of policies she plans to pursue if she is elected into Malacañang.

Robredo specifically cited former Ifugao governor Teddy Baguilat, who is running on a pro-environment and pro-indigenous peoples platform, and detained opposition senator Leila de Lima, an international human rights icon and the most high-profile political detainee under the Duterte regime.

Leftist groups, however, earlier criticized Robredo for not including progressive lawyer and former lawmaker Neri Colmenares of Bayan Muna in her senatorial slate. She instead gave the last slot to lawyer Sonny Matula from the Federation of Free Workers.

Watch this excerpt from Robredo’s press conference in Baguio City: