RECOUNT. The recount of votes for Cebu City councilors will be done at the Commission on Elections central office in Intramuros, Manila.

Facebook Twitter Copy URL
Copied
The regional Comelec has declared as nuisance a candidate that has the same surname as the late candidate Amay Abella. The former's votes will be credited to the latter.

The last Cebu City councilor might lose his seat once a recount of votes, expected to favor lawyer Marie Velle “Amay” Abella, is made official on Thursday, September 16.

Before she died, however, she filed a petition to declare another candidate named Sherwin Abella as a nuisance. She argued that Sherwin was being used by her rivals to confuse voters due to their similar surnames. She won the case.

“If we can recall, Sherwin Abella was declared a nuisance candidate in the 2019 elections and, thus, a recount was needed,” Commission on Elections (Comelec) Central Visayas regional attorney Ferdinand Gujilde said in a phone interview with Rappler on Tuesday, September 14.

This means Sherwin Abella’s votes will be credited to petitioner Amay Abella.

What nullification of votes means

Gujilde explained that, with around 20,000 votes to manually recount, it is possible that Amay Abella could win the 5th seat, and move the other four councilors down one position, and thereby unseating Zafra, who currently occupies the last council seat.

“Amay needs only 5,000 votes. We know she will win and Amay’s replacement will be announced in due time,” Amando Virgil Ligutan, Bando Osmeña Pundok Kauswagan (BOPK) legal counsel, told Rappler.

Rappler has reached out to Zafra, who ranks last, for a comment but he has yet to respond as of this writing.

In 2019, Amay Abella ran under BOPK, the party of then-mayor Tomas Osmeña, and won 110,131 votes, losing the last seat in the council to Zafra.

“Just like what is stated in the writ, not only do we need to recount, we need to inspect the votes one by one,” said Gujilde.

Gujilde added that, in the event that the late Amay Abella would win, since she already died, her position will be considered vacant and will be filled out by appointment by someone from the same party.

“The party will certify a party mate under the same party with which Amay ran. The city council will recommend the replacement based on that certification, and then the President, through the Executive Secretary, will have the replacement appointed,” he said.

In a phone interview, Ligutan said the party had just received a copy of the writ of execution last week. “This is dedicated to Amay,” he said.

This would give Osmeña’s party the majority in the city council, with eight members against PDP-Barug’s seven.

The Cebu City Council is split into two districts: the 1st District (North District) and 2nd District (South District). The candidates with the eight highest number of votes in each district gets seats on the council.

The council also has two ex-oficio members: the presidents of the Association of Barangay Captains and the Sanggunian Kabataan.

Osmeña lost his bid for reelection in 2019 against Edgardo Labella in one of the most heated mayoral elections in recent history.

So far only current Vice Mayor Mike Rama of PDP-Barug has expressed his intention to run for mayor in the 2022 elections.

Mike Rama to run for mayor of Cebu City in 2022 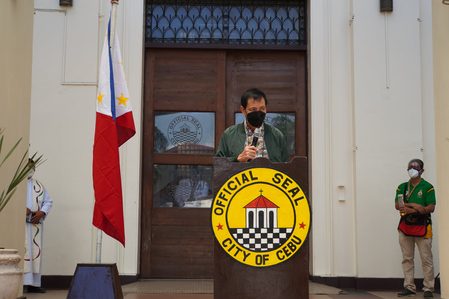 Gujilde said that all councilors may continue to hold office until such a time that Comelec issues a writ of execution for them to vacate.  – with a report from Ryan Macasero/Rappler.com