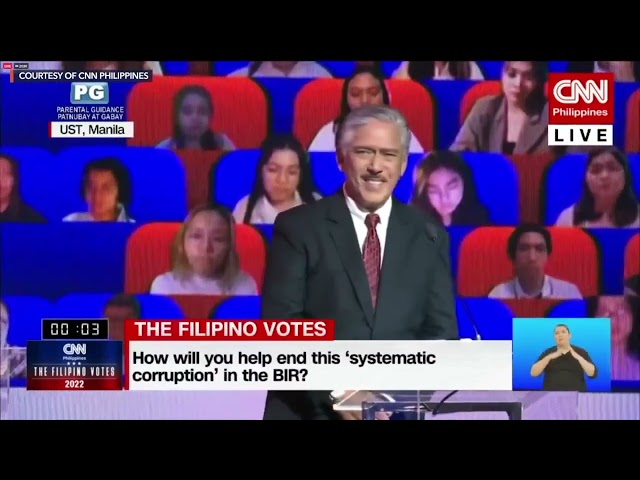 Facebook Twitter Copy URL
Copied
‘Senator Pangilinan, pareho kayong nagboto sa CREATE Act that gave big tax breaks. So, what are you saying that you are not guilty of this process?' asks Walden Bello

During the CNN vice presidential debates on Saturday, February 26, vice presidential aspirant Walden Bello slammed Sotto and Pangilinan for allegedly allowing themselves to be “used” by Duterte and his economic team to push for contentious policies.

(Let’s be honest. We know that tax breaks were given by executive, as well as the senate and house. The CREATE law brought down corporate income taxes from 30% to 20% and foreign businesses to 20% from 25%. We lost trillions of pesos because of that. That has long been the agenda [of the Duterte administration] even before the pandemic. We were used by them and used the pandemic as an exuse. So, Senator Sotto, Senator Pangilinan, both of you voted in favor of the CREATE act and gave big tax breaks. So are you saying that you are not guilty of this process? Let’s stop this nonsense.)

CREATE or the Corporate Recovery and Tax Incentives for Enterprises Act was pushed prior to the pandemic, but was eventually portrayed as a relief measure to help businesses recover from the pandemic.

Finance Secretary Carlos Dominguez III originally sold these corporate tax cuts as a way to invite investors and generate as many as 1.4 million jobs over the next decade.

During the pandemic, Dominguez modified his narrative and claimed the measure will prove to be “one of the largest economic stimulus measures in the country’s history” – reviving our economy and rescuing it from the deep recession.

However, critics questioned the move as the measure negatively affected government income amid falling tax revenues.

“The CREATE Law precisely, binabaan nito as a means to be able to provide support, even the biggest companies like itong mga airline companies, billion-billion din ang nawawala sa kanila dahil sa pandemya. So, we voted in favor of that because we recognized na iba ang kondisyon sa ngayon because of the pandemic,” Pangilinan said.

(The CREATE law lowered taxes as a means to be able to provide support, even the biggest companies like airline companies, bilions of pesos were lost due to the pandemic. We voted in favor of that because we recognized that the conditions changed because of the pandemic)

A visibly irked Sotto brushed off the issue.

“When we pass laws, it’s the Congress that pass, bakit pinag-iinitan mo kaming dalawa? (why are you taking it out on the both of us) I don’t think we should, huwag nating patulan yung mga ganong style (let’s not fall for this style),” Sotto said.