#WeDecide: What you can do to take the Philippines back in 2022 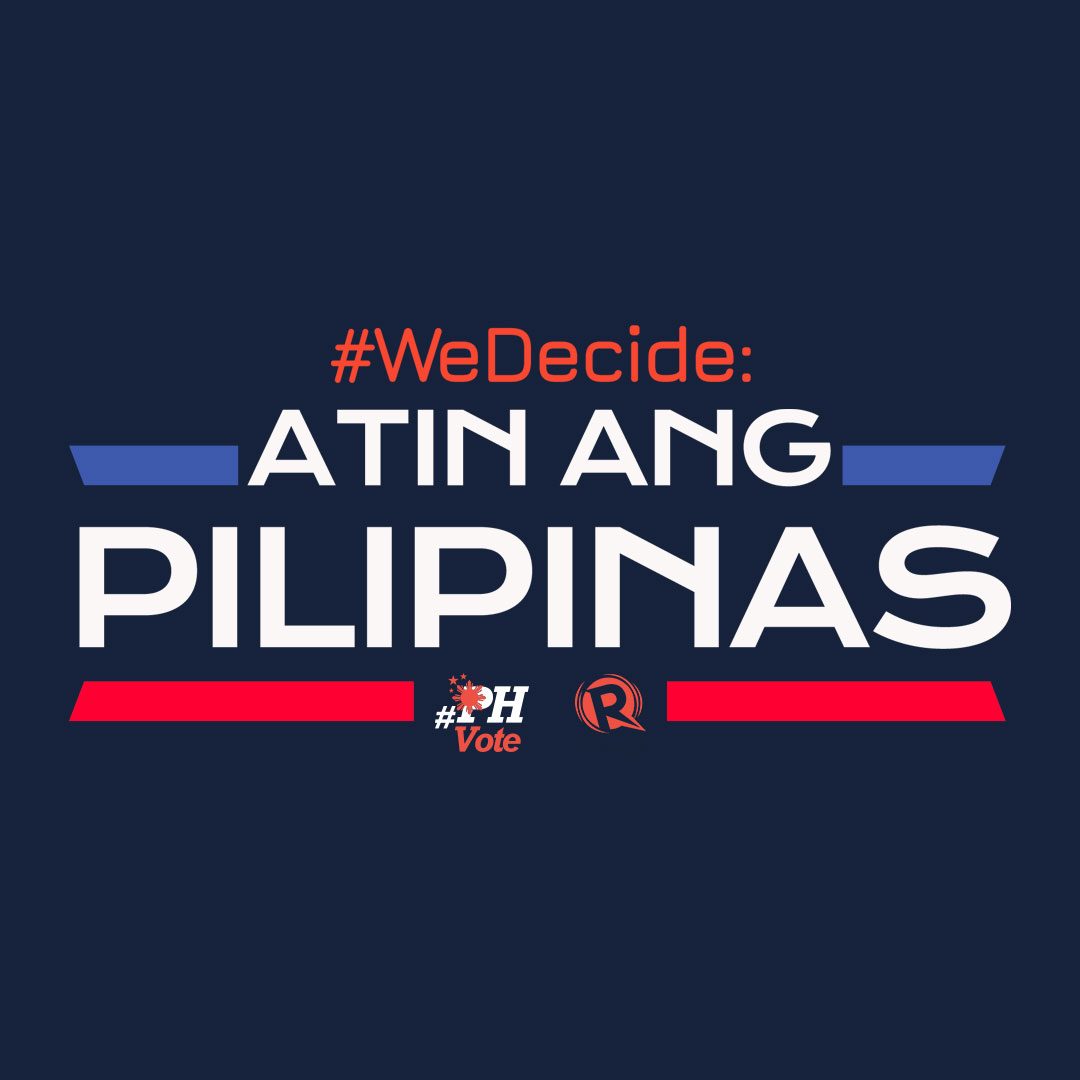 Facebook Twitter Copy URL
Copied
One thing we have not lost amid the violence, intimidation, lies, corruption, incompetence, and heartlessness engendered by many in the high places, is our bayanihan spirit. But we have to do more – a lot more. In 2022, #WeDecide: Atin ang Pilipinas. 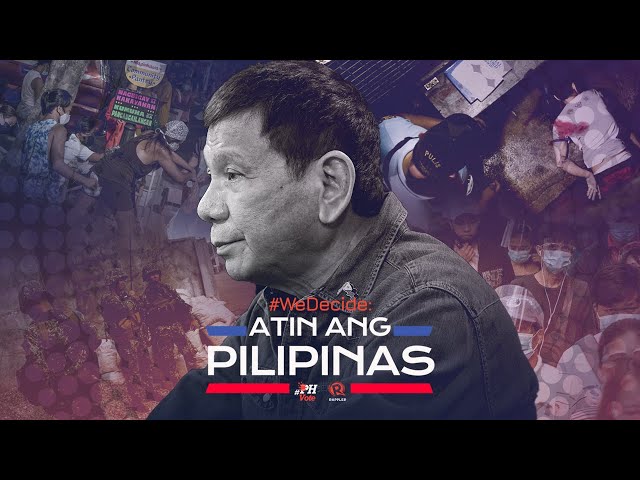 We have lost so much in the years Rodrigo Duterte is president.

Since 2016, as a nation, we have lost trust in key institutions and seen our sovereignty practically given away. We have violated rights and lost many lives in the brutal campaign against drugs and the too broad a hunt for terrorists. We have had too many preventable deaths, and counting, from a pandemic that the government belatedly responded to, and still inefficiently deals with.

We have given much, to each other, in the years that Duterte and his alter egos seemed to have left ordinary Filipinos to fend for themselves.

Since 2016, in pockets of community initiatives and in the faithful service of career government frontliners, we have seen beacons of hope in times of crises.

Remember how we helped each other

Remember this: When fishermen from Occidental Mindoro were left to drown by the Chinese vessel that rammed their boat in the West Philippine Sea – a “little” incident, President Duterte said – Vietnamese fishermen, fellow Filipino fishermen, a carpenter, a painter, and a tricycle driver from Mindoro rescued them. Private donors gave cash to buy the fishermen new equipment and help them with alternative livelihood.

Remember this: When the government’s reflex was to buy tons of personal protective equipment from China, local tailors and dressmakers sewed these for our frontliners. When the government banned public transportation without a thought to health workers who didn’t have cars, families, businesses, and communities offered shuttle services. Thousands donated face masks, disinfectant, alcohol, and other supplies for vulnerable communities. They cooked food and sent them to frontliners – and continue to do so.

Remember this: When the Department of Education pushed through with the school year without ensuring that the system, the teachers, and the students were equipped for distance learning, local governments, private groups, and individuals bought gadgets for poor students. Rappler’s civic engagement arm, MovePH, launched #PisoParaSaLaptop campaign, and donations amounting to over a million poured in.

Remember this: When cops arrested six jeepney drivers despite them maintaining physical distance during a rally calling for aid, calls posted on social media helped raise funds so they could post bail. One of the drivers, 72-year-old Elmer Cordero, was able to put up a sari-sari store using the excess donations. To give back to the community, he recently joined the community pantry initiative and gave away fresh vegetables to whoever needed them in his area.

Remember this: When the governor and congressional representatives of Palawan pushed for a law dividing the province into three, despite the opposition of residents and the warnings of security experts that it could weaken the country against China, Palaweños brought their protest to the ballot. In the plebiscite – done amid the pandemic – 60% of voters defied risks and poor weather to cast their “no” vote, which won in 19 of the 23 municipalities.

Remember this: When the Duterte government placed many areas in lockdown again without distributing ample aid to residents who couldn’t work and feed their families, a woman set up a community pantry to feed her community along Maginhawa, Quezon City. The government’s response was to red-tag and demonize the organizers of these pantries, which had quickly multiplied across Metro Manila and key areas across the Philippines. Yet the volunteers and donors have persisted – as of May 5, more than 1,000 community pantries have been set up nationwide. Interest groups, such as K-Pop fans and mapmakers, have banded together to make the pantries accessible to donors and beneficiaries. Lawyers are on-site to protect organizers from cops who attempt to harass them.

What do these stories tell about us Filipinos? That one thing we have not lost amid the violence, intimidation, lies, corruption, incompetence, and heartlessness engendered by many in high places, is our bayanihan spirit.

More than demonstrating our resilience, which abusive officials have exploited when they couldn’t or wouldn’t serve our interests, we will aim to exercise our collective power to pull this nation back up. 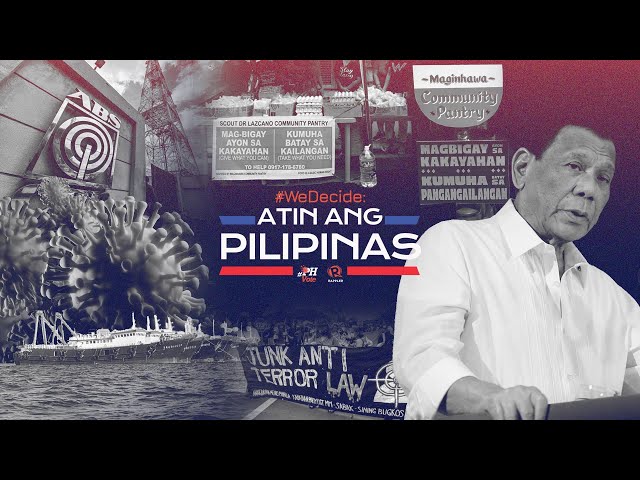 #WeDecide: Atin ang Pilipinas – more than Rappler’s hashtag and slogan for our coverage of the 2022 Philippine elections, this is the rallying cry that our communities will advance.

Join the #PHVote Facebook group and other online and offline communities that share your values of compassion and goodwill, respect for women and human life, and others that matter to you and your community most.

You can also pass on the #WeDecide message by translating the battle cry – Atin ang Pilipinas – in your native language and disseminating them to neighbors who may not be online.

Bookmark our #PHVote coverage page. Make Rappler and other legitimate and credible news outlets your source of election-related information.

Participate in the elections

Register as a voter, whether you are in the Philippines or a Filipino based abroad, if you are a first-time voter.. Reactivate your voter’s record if you missed voting in the last two elections. Here’s everything you need to know about voter registration during the pandemic. You may also read the Filipino version here.

There are other ways to participate in the coming elections:

If you want to get involved in running political campaigns and helping good and qualified leaders elected, you can start by understanding the dynamics and lessons of the 2019 elections.

Membership in the Rappler+ community will give you access to exclusive content, research, and briefings on various issues, like the elections, as well as newsletters written by Rappler editors.

The work for 2022 starts now, even a year before we cast our vote for president, vice president, senators, congressman and congresswoman, party-list group, and governors and mayors and their slates.