That’s what Julieta Domasian said when asked why she was supporting the Ilocano son of dictator Ferdinand “Bongbong” Marcos Jr instead of her fellow Bicolana, Vice President Leni Robredo. 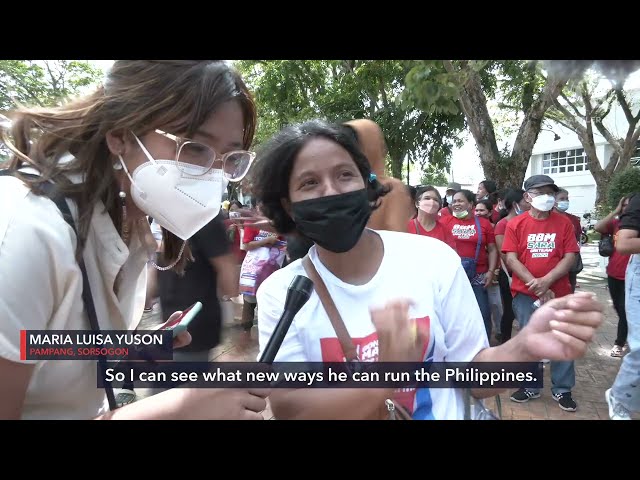 Wearing a BBM-Sara red shirt and holding the tarp of the survey frontrunners, Domasian explained that she likes Marcos because of the latter’s promise to bring down electricity charges.

The Bangui windmills already a staple of his campaign, Marcos mentions clean energy from time to time, and brings up reviving the failed Bataan nuclear power plant of his father – a project also attended by corruption and has reached a decision at the Supreme Court for a Marcos crony to return P1 billion to the government over the project.

For Domasian, it matters that there is a promise to make electricity cheap. And it’s a dream she wouldn’t entrust to Robredo.

She thinks women are weak even though she is a woman? “Opo, dapat po lalaki (Yes, it should be men),” said Domasian.

Ramir Regala Florese, Robredo’s provincemate from Camarines Sur, did not like that the vice president made a stance on support for Ukraine. Florese told Rappler Robredo was courting war.

(I don’t like the way she speaks. She repeats herself, and I don’t think she has a good platform. Just on this Ukraine, she will bring us to war.)

On the same day of Florese’s interview at the Sorsogon rally, Marcos released a statement flip-flopping on the issue of Ukraine which is being invaded by Russia, in a manner now being investigated for potentially constituting war crimes.

Like Robredo, Marcos now sides with Ukraine, even though just three days earlier he said “I don’t think there is a need to take a stand.”

A group of women wearing white Marcos-Sara t-shirts said they were from Pampang, Sorsogon, which is where Marcos started his motorcade Friday after skipping what was supposed to be a motorcade all the way from neighboring province Albay, usually a one-hour drive.

Maria Luisa Yuson does not know yet which of Marcos’ platforms she likes, explaining she only joined her group.

“Wala pa, no comment pa ako.. Napasama lang ako sa kanila (None yet, I still have no comment…I’m just joining them),” said Yuson who was wearing a white shirt with Marcos’ face on it.

All Yuson knows is that she is convinced by “stories” that it would be better if Marcos and his running mate Davao City Mayor Sara Duterte lead the country.

Yuson’s companion Vida Fulgar from Pampang, Sorsogon, likes that Marcos is tested. Marcos has been in government for 27 years, from vice governor of Ilocos Norte, to governor, to congressman and then senator.

Asked which Marcos platform she likes in particular, her companions coached her: change. 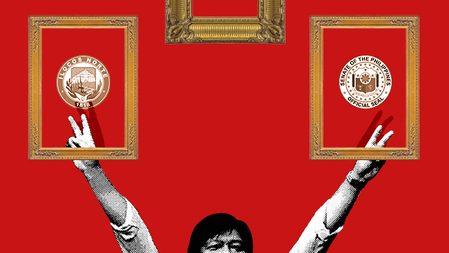 The promise of gold

In Masbate City on Saturday, March 6, men and women, both old and young, were clad in white cloaks, some with a sky blue veil above it, as they waited for Marcos’ chopper to land in the airport.

Some brought rosaries, others had a wooden stick. Marcos Jr waved at them as his float passed by. On that day, his spokesperson Vic Rodriguez said Catholic clergy should “refrain from openly meddling with politics.” Marcos has secured the endorsement of Mike Velarde, leader of the charismatic Catholic group El Shaddai, but several other Catholic leaders backed by nuns and priests have come out in the open in an unprecedented manner to endorse Robredo.

Ian Yasser Risalon, from Baleno, Masbate, told Rappler that their group are Marian devotees collectively known as Ina Poong Bato Simbahang Naglalakbay. As their poster indicates, they are not Roman Catholic, but Eastern Catholics.

They held up a poster of the late dictator Ferdinand Marcos and his wife, Imelda.

Risalon said Ferdinand and Imelda were their fellow Marian devotees, and their son Bongbong would make sure that no Filipino would be poor.

Risalon believes Marcos was a great president, a rhetoric heard often from loyalists who deny that atrocities were committed by the dictator during martial law, a time they call the golden era despite statistics of how the economy sank under Bongbong’s father.

One of their posters refer to a Maharlikan nation which will be “great again,” a Marcos ethos. Maharlika was the name of the dictator Marcos’ guerilla unit according to his war records that were eventually declared to be fake.

Maharlika is also the name of the mythical kingdom of the royal family Tallano, whose prized gold were given to the dictator Marcos, and will one day be distributed among Filipinos. This myth had been debunked repeatedly.

(The gold was a blessing to him, so he can share it among the people, even in other countries, so no one would be poor. That is the aspiration, so his son BBM [Bongbong Marcos] can also help others.)

A myth that family has let fester for years, Marcos Jr said in recent interviews he has never in his life seen gold. – Rappler.com