MANILA, Philippines – It could not have come at a worse time. Yet, it was a nightmare waiting to happen.

The crass and tough Rodrigo Duterte triggered a weekend rage after a video of his joke on rape went viral, angering not a few Filipinos and sending his campaign staff to  damage control mode. This isn’t the presidential candidate’s first show of bad taste or foul mouth. But Duterte is ahead in surveys 3 Mondays to go before election day, and a meltdown like this could either burst his bubble or prove that his support base, like that of the womanizing, boozing Joseph Estrada in his heyday, is what would still propel Teflon Duterte to the presidency.

The once-reluctant presidential wannabe has the momentum as candidates breathe their last gasp in this campaign. Crowds in his sorties are not just packed, they simmer in their passionate belief in the man who vows to put an end to crime, traffic, and all our everyday woes.

It is a voting bloc that has come to embrace his promise of change – warts and all. So when confronted with social media attacks following his rape remark, the candidate, in typical Duterte fashion, would not apologize. "I am willing to lose the presidency. Do not make me apologize for something which I did na talagang (which was really) it was called for at the moment," he told media. 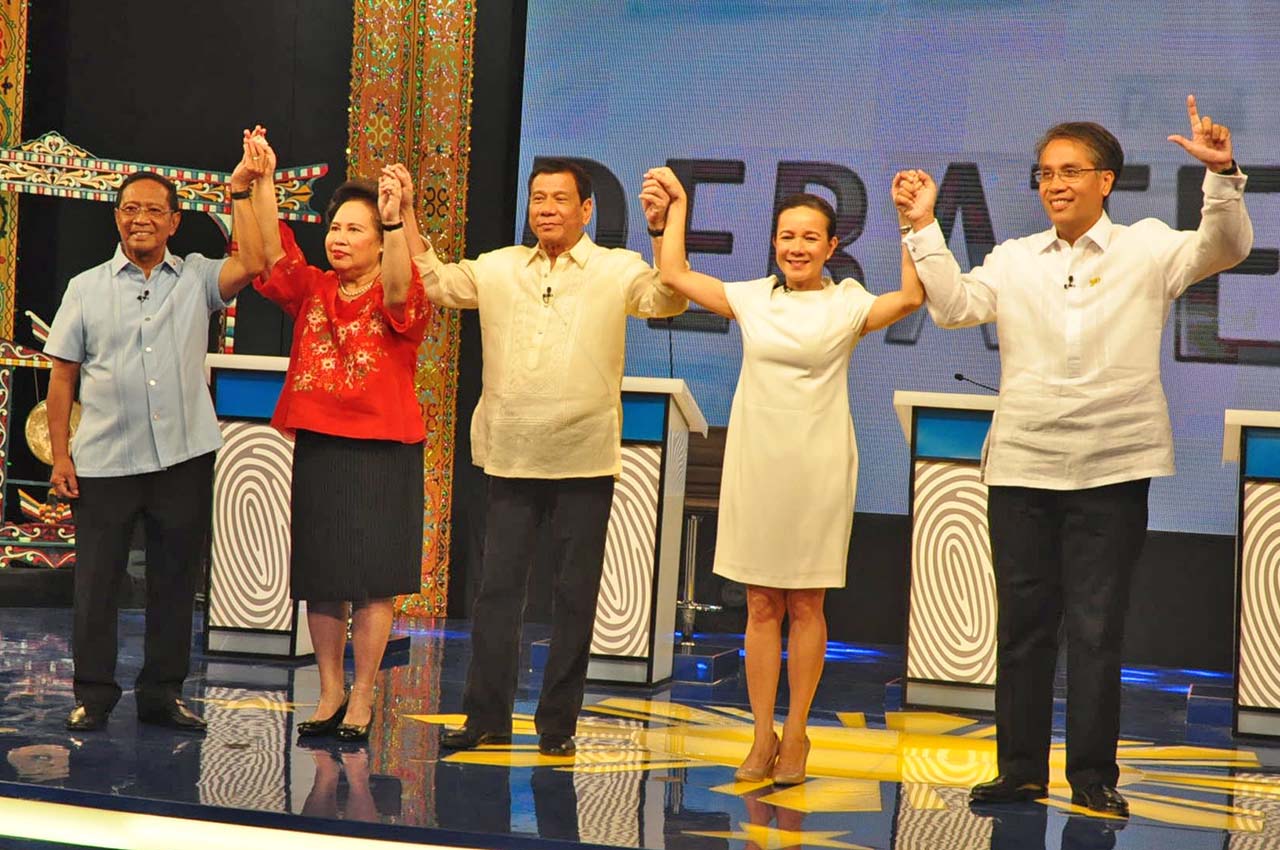 RUNNING IN MAY 2016. The 5 presidential candidates.

Liberal Party senatorial candidate Ralph Recto last week expressed doubts that any of the presidential bets would get a majority vote. “That means that 70% did not vote for you and I think it’s going to be difficult for the next president. It will have to be a continuing campaign to win the hearts and mind of the Filipino people,” Recto said.

In the 1998 elections, many thought the popular Estrada would be a majority president (who gets more than 50% of votes cast). But in the end, he got only 39.8% of the votes. It is President Benigno Aquino III who got the biggest plurality (but not majority) in post-Marcos elections, when he garnered 42.1% of votes cast in 2010.

Aquino enjoyed some degree of honeymoon with political allies after elections. Recto said he doesn’t think the next president would have the same luxury, given the current context.

(READ the Rappler explainer: Electing a president: Picked by some, rejected by many.)

Returning to the Visayas, Mindanao

Running against time, presidential candidates are headed to the Visayas and Mindanao this week to press more palms.

Jejomar Binay wants to take advantage of Manny Pacquiao’s victory in Las Vegas as he campaigns with the world boxing champion in General Santos City and Sarangani province starting Tuesday, April 19. Pacquiao, running for senator under Binay’s United Nationalist Alliance, crushed Bradley in what he described as his last fight. Like Duterte, Pacquiao, too, had a social media meltdown when he described gays as worse than animals. His numbers dropped after that, but he’s been able to slowly recover. Pacquiao beat Bradley in their 3rd meeting on April 10.

Administration bet Mar Roxas is doing the rounds of Eastern Visayas, once his bailiwick but which is slipping away from him. He’s again visiting the provinces of Leyte and Samar. Duterte, on the other hand, is entering Roxas territory – Iloilo and Bacolod, while Grace Poe is visiting Palawan and Cagayan de Oro.

(BOOKMARK our Campaign Trail page, which is constantly updated throughout the week with the candidates' schedules.)

Sunday, April 24, will be the final presidential debate, to be held in Pangasinan and organized by the Commission on Elections (Comelec) with ABS-CBN. Rappler is also holding its final round of senatorial debates on Friday, April 22.

Last week, on April 15, 6 senatorial aspirants tackled their platforms and answered questions in Rappler’s debate at the University of the Philippines School of Economics in Diliman. They were Walden Bello, Leila de Lima, Sherwin Gatchalian, Richard Gordon, Risa Hontiveros, and Dionisio Santiago.

The exchange on health issues appealed to netizens as it highlighted the sorry state of the country’s local health centers. The back-and-forth was sparked by Gatchalian’s question addressed to health advocate Hontiveros: “Is it time to arrest or ban traditional birth attendants or hilot?" Running for the Senate for the 3rd time, Hontiveros was the overall winner in Rappler’s online poll.

A key Negros Occidental ally of Roxas quit last week from his post as head of the Liberal Party standard-bearer’s parallel campaign organization. Why he resigned is telling of the troubles facing Roxas, who remains at the bottom of the survey, ahead of only one rival: cellar dweller Miriam Defensor Santiago.

Former Negros Occidental Governor Rafael Coscolluela announced he will run his own campaign team for Roxas and Leni Robredo. But he wants nothing to do with the national headquarters, saying volunteers are confused over who’s running the show for Roxas: the party or his family. These turf issues have slowed down efforts to organize voters at the grassroots, Coscolluela said.

Cebu, drought, and a plea to Comelec

Cebu politicians asked the Comelec to exempt them from the rule against distributing relief goods during the campaign season, in the wake of the drought affecting farmers and their families. The province and neighboring Bohol are under a state of calamity due to El Niño. Cebu City, in fact, has started water rationing.

Cebu Governor Hilario Davide III asked Comelec that they be allowed to “continue providing humanitarian assistance” to farmers and their families. – Rappler.com