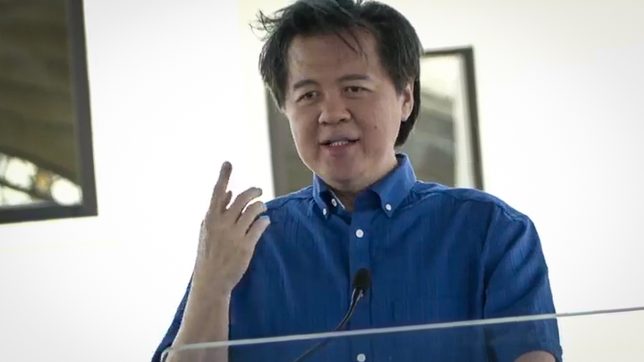 VP BET. Willie Ong speaks at the launch of his and Mayor Isko Moreno's campaign launch.

Facebook Twitter Copy URL
Copied
Asked how he would fund his plans, the doctor who is a social media star tapped to be Isko Moreno's running mate, says government must make testing a budget priority

(Let’s make RT-PCR testing free. If we test a lot, the positivity rate will go down, meaning you won’t get as many COVID-19 positives.)

Here’s what else Ong said, in a nutshell:

Asked how he would find the funding for free testing, Ong said it’s just a matter of making testing a government budget priority.

“We have a lot of budget for COVID-19. I would prioritize testing, health workers, hospitals,” he said.

But he also admitted that antigen testing could be a cheaper alternative. The government is already promoting the use of antigen testing and ordering health facilities to report antigen test results to the government. But reverse-transcription polymerase chain reaction (RT-PCR) tests remain the gold standard for this procedure..

Moreno has also mentioned aspects of his pandemic plan in an interview with Rappler.

Ong, a doctor who dispenses health advice on social media and has thus created a large online following, says he would push for hospitals to be given more funds, on top of what they got from the annual government budget.

He pegged the amount at P100 million a year, for a hospital like East Avenue Medical Center, for example.

“It’s extra money that hospital directors can use for poor patients. The figure will change depending on the extra budget available,” said Ong in a message to Rappler.

The doctor-turned-politician said he would make sure health workers are paid properly, especially during the pandemic.

“First, you need to pay the healthworkers properly, give them a morale booster. If they are happier, they can work better so we can admit more COVID-19 patients,” said Ong. “We need to increase the number of beds, like field hospitals, new hospitals like infectious disease hospitals,” he added.

Ong said he would make sure the Inter-Agency Task Force on Emerging Infectious Diseases (IATF-EID) would be led by a doctor.

“Second, for the IATF head, I’m sure General Galvez is a good person but I think a doctor can do better or a health worker so that it’s more decisive,” said Ong.

However, the IATF-EID is already led by a doctor, Health Secretary Francisco Duque III. The health secretary is the designated head of the task force based on the executive order creating the task force.

Carlito Galvez Jr. is the chief implementer of the National Action Plan vs. COVID-19 and the National Task Force vs. COVID-19, a separate entity created by Duterte for the pandemic. – Rappler.com