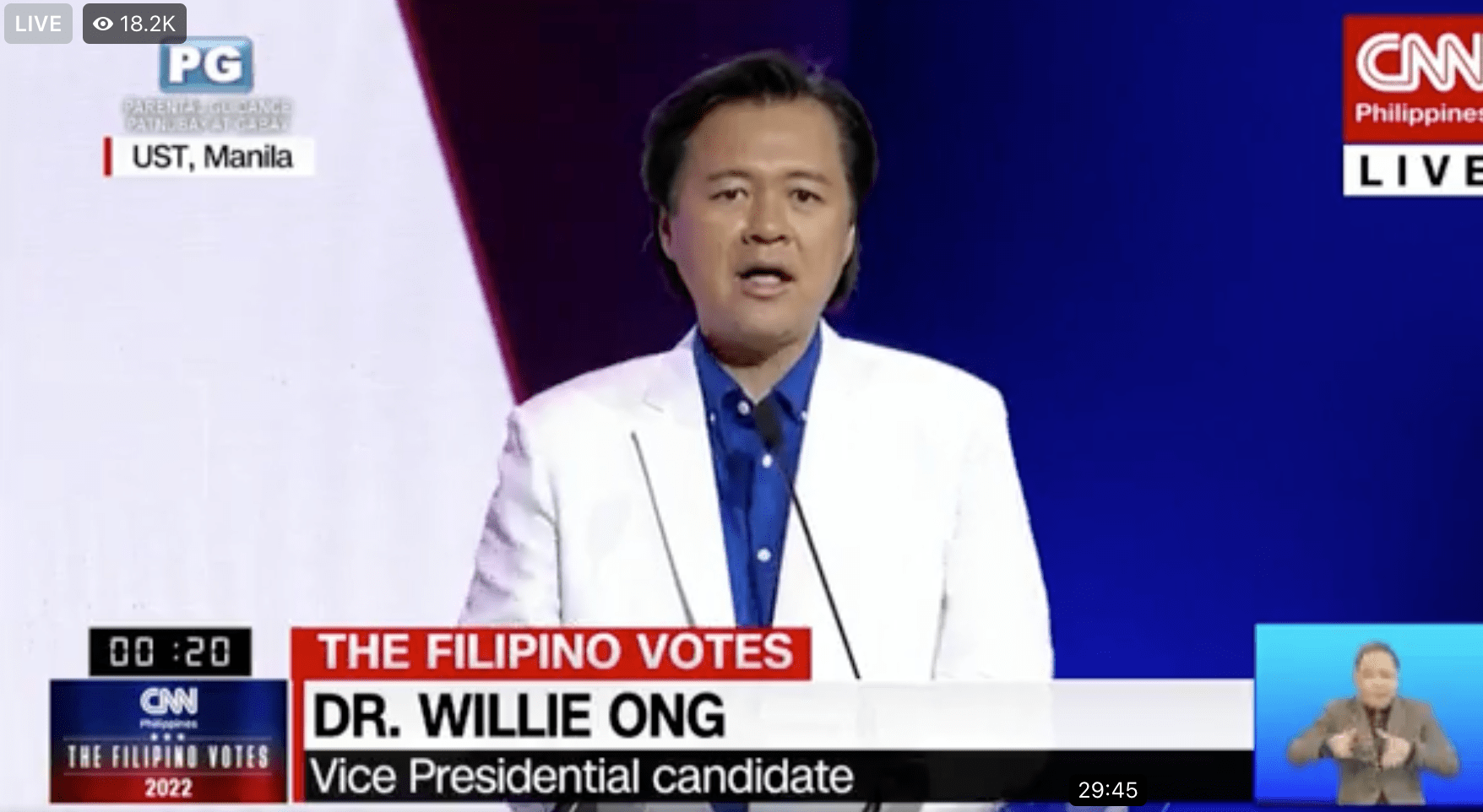 Facebook Twitter Copy URL
Copied
The lone white coat among dark blazers, Willie Ong highlights his knowledge on health issues and makes sure to circle back to his standard-bearer, Isko Moreno

MANILA, Philippines – “Play to your strengths” may have been the mantra of Isko Moreno’s running mate Willie Ong as he strode onto the stage for CNN Philippines’ vice presidential debate.

The lone white coat among blazers, Ong made it immediately clear that he would be playing the doctor card to the hilt during the three-hour show.

The debate, the first for vice-presidential candidates, was held on Saturday, February 26, at the University of Santo Tomas.

(The reason I am running is simple, because of the pandemic.)

(I am not a politician but a doctor. I know how to buy good medicines for you so your children can stay alive.)

For many of the questions, Ong had a medical or health perspective. When asked about the Philippines rejoining ICC, he said he agreed then swerved to talk about how the drug war should take a public health approach instead of a criminal justice approach.

Instead of merely jailing addicts, Ong pushed for free medicines to treat their addiction and more psychologists and psychiatrists to help them deal with mental health issues.

He thinks the government should help in lessening the stigma drug users face that make it difficult for them to seek help.

Even when asked how to improve internet access for children, Ong devoted most of his answer to a panoply of statistics on health issues plaguing kids – stunting, malnutrition, diarrhea, even cyber bullying.

His only direct response to the internet question was: “Sa access sa internet, may plano kami ni Mayor Isko diyan eh, sa fiber optic na gagawin niya.” (In terms of access to internet, Mayor Isko and I have a plan for that, with the fiber optic project he will implement.)

Ong was likely referring to Moreno’s promise to build a nationwide fiber-optic network.

But his response during the debate indicated he wasn’t well-versed in the technical terms of internet technology or that, perhaps to make up for this, he wanted to show his knowledge about children’s health issues.

His demeanor during the debate was calm and pleasant. It helped that he was spared from the verbal tussles between rivals Walden Bello, Senator Vicente Sotto III, and Senator Kiko Pangilinan.

Consistently circles back to Isko Moreno

Ong was consistent about another thing: promoting his standard-bearer.

In almost all his answers, he circled back to Isko Moreno, his governance in Manila, and their 10-point platform.

He touted Moreno’s program of providing tablets to Manila public school students, 700,000 food boxes as pandemic aid, how supposedly 97% of drug suspects in Manila are arrested alive, and how Manila was the first to purchase many COVID-19 medicines.

The loyalty was touching, given the headlines generated by Moreno’s Mindanao sorties last week. Ong had been asked to sit them out while his standard-bearer was paired with another vice-presidential bet, Sara Duterte.

It was interesting that, despite this recent controversy, Ong was not asked by CNN Philippines moderators to weigh in on unofficial tandems. 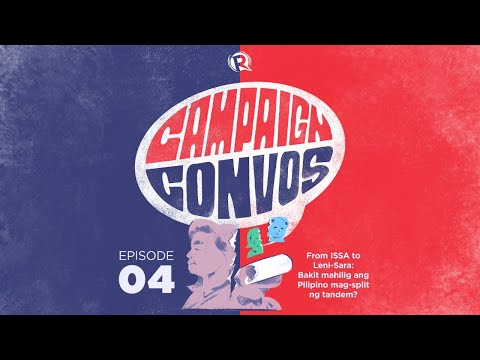 But Rappler editor-at-large Marites Vitug had another takeaway from this.

“I think the proposal of Dr. Ong and his frequent reference to Mayor Isko, I think it’s also a function of not having experience in government of running a bureaucracy, unlike Senator Kiko [Pangilinan], Senator Sotto who can talk about their own programs,” said Vitug during In The Running, a show assessing the CNN Philippines debate.

Ong made good on his promise to study other issues apart from health.

When asked how to solve corruption in the collection of taxes, he gave solid suggestions that have been recommended by experts and officials before – like digitizing (in his words, “computerizing”) government transactions and retiring Bureau of Internal Revenue personnel but rehiring “clean” ones.

His take on how to pass a ban on political dynasties was also pragmatic. He suggested not an outright or blanket ban but a policy that would impose a “gap” between the terms of one family member and another. Another compromise could be to impose a maximum on the number of family members that could hold elected office.

Ong merely adopted Moreno’s idea to halve taxes on oil and electricity when asked how he would address rising oil prices. He echoed his standard-bearer’s proposal to continue providing aid to affected sectors and push through with joint oil exploration with China as long as it recognizes Philippine rights over the West Philippine Sea.

But Ong also stood out for saying the Philippines should add more renewable energy to its mix of power sources so it would not rely too much on fossil fuel sources held by other countries.

Candidates were told in advance what topics would be tackled during the debate, but not the exact questions that would be asked.

Ong prepared for the debate with Moreno’s campaign manager Lito Banayo last Monday, February 21. He had many statistics ready and obviously familiarized himself with his standard-bearer’s platform and statements. – Rappler.com