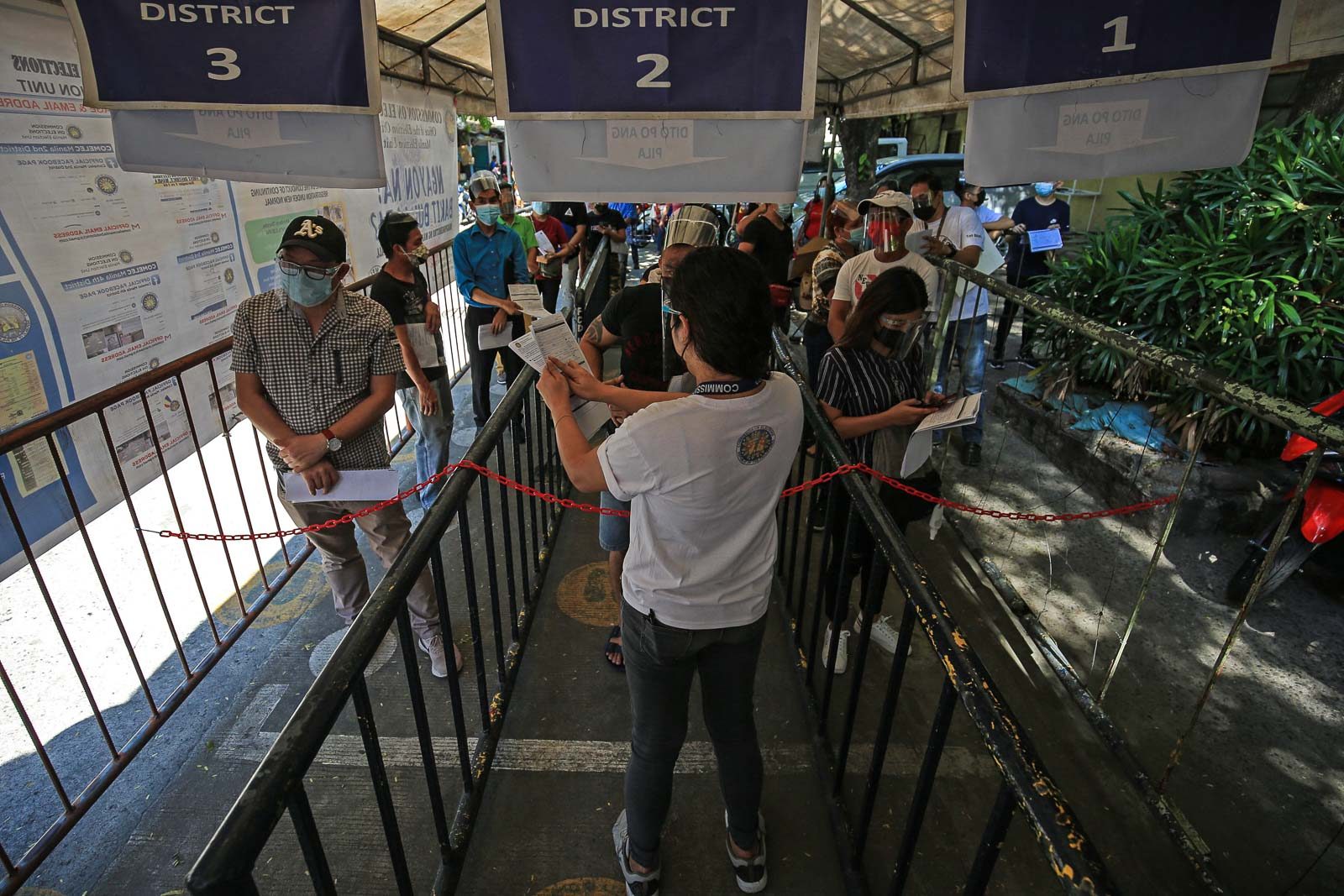 EXERCISING A RIGHT. Applicants flock to the Comelec office in Arroceros, Manila on Monday, May 17 2021, to register for the 2022 elections.

Youth groups banded together to amplify calls for an extension of the September 30 voter registration deadline, after hard lockdowns in several parts of the Philippines prompted the Commission on Elections (Comelec) to halt accepting voter applications.

At least 30 youth organizations led by the First Time Voters Network (FTVN) and Akbayan Youth have signed a petition supporting the appeal to the poll body. Senator Risa Hontiveros also backed the call in a recorded message during the groups’ virtual briefing on Thursday, August 12.

(We spent at least two months under hard lockdowns this year, days which could have been spent by the youth to register.)

The alliance has forwarded the letter to Comelec Commissioner Rowena Guanzon, but  it has yet to receive a reply.

Guanzon and Comelec spokesman James Jimenez have been unenthusiastic about a potential extension of the voter registration deadline, despite the return of vote-rich Metro Manila to a two-week enhanced community quarantine (ECQ) beginning August 6.

Jimenez had added that the Comelec already reached its target of 4 million first-time voters back in June, and that the number of people eligible to cast their ballots for the 2022 polls already surpassed 60 million, just a million shy of its projection.

But the alliance insisted that 13 million more potential voters would be deprived of the opportunity to register, based on the 73 million qualified voters estimated by the Philippine Statistics Authority.

“Many of the first-time voter applicants tried to book a schedule through iRehistro but slots for July have been filled already by March. Because of this, hundreds would wake up early and grapple with long lines to be included in the [few hundred] slots allotted by Comelec per day,” FTVN Caloocan coordinator Khylla Meneses said, sharing complaints of the youth on the ground.

Other local representatives of FTVN also cited other factors that complicate efforts to register for the 2022 polls, such as difficulty to comply with the necessary requirements.

“Set clear guidelines that accommodate alternative but legitimate forms of identification for first-time voters especially students and out-of-school youth who may not have easy access to documentary requirements,” the alliance urged Comelec.

Party-list Kabataan and hundreds of youth leaders submitted a 26-page petition to Comelec on Monday, August 16, appealing for the extension of voter registration.

“The Supreme Court has already acknowledged before that the Comelec has the power to set the deadline of voter’s registration 120 days before the day of the elections,” their letter said.

“The September 30 deadline was set before the COVID-19 pandemic and it now fallsupon the Comelec’s prerogative to adjust the deadline due to the ramifications of the pandemic,” the youth groups added.

The youth groups’ appeal underscores the long-lasting impact of the COVID-19 crisis on the electoral process, and the poll body’s preparations for the May 9, 2022 vote.

In late July, a commissioned Pulse Asia Research Incorporated survey revealed that nearly half of Filipinos would rather skip election day next year should coronavirus cases remain high.

The poll body however has guaranteed it is capable of conducting safe elections in 2022. – Rappler.com