Enrile on Gigi Reyes: I trust her, I want her back

MANILA, Philippine - If media reports are to be believed, she reportedly caused him serious trouble in his marriage 15 years ago. Now she's again at the center of a controversy involving him.

But Senate President Juan Ponce Enrile will not let her go.

Enrile however said he is trying to persuade her to change her mind.

"I have to convince her to come back because in all the jobs in government that I handled since I joined government in 1966 … I delegate my powers to people that I trusted. They can sign cheques for me, they can decide for me because they know more or less how I think," Enrile said.

Enrile also lamented talk of a supposed illicit relationship with Reyes. He simply trusts her, Enrile told reporters in Laguna where he joined a senatorial campaign.

Gigi Reyes found herself in the middle of a bitter word war between her boss and Cayetano, who dragged her name in a privilege speech he delivered Wednesday before the plenary to detail why he thinks the Senate President is mad at him.

Cayetano said there are two reasons why Enrile doesn't like him and both reasons involved Gigi Reyes.

One, Cayetano said Reyes is close to former President Gloria Macapagal-Arroyo and former First Gentleman Juan Miguel Arroyo. Cayetano was the First Gentleman's fiercest critic. Cayetano accused Enrile of helping a group that supposedly criticized him when he stood up in Congress to criticize the Arroyo couple.

Two, Cayetano said Reyes is also the best friend of the wife of retired Supreme Court Justice Dante Tinga, who ran for Taguig mayor in 2013 against Cayetano's wife Lani. Tinga lost but contested the results before the Commission on Elections.

Cayetano said these are among the reasons he was excluded from the cash gift that was released to other senators in December 2012.

He said that Reyes was so influential with Enrile that she would join meetings of senators. In its January 24 issue, a Philippine Daily Inquirer story detailed how Reyes is considered the "24th senator," citing information from Cayetano.

According to the Inquirer story, Reyes exercises extraordinary powers in the Senate. She signs cheques in behalf of the Senate President. She issues memos to Senate personnel. She is not only allowed inside the lounge that is supposedly exclusive to senators, she can also speak her mind during Senate caucuses.

Enrile earlier accused the Inquirer of waging a campaign against him. In his memoir published last year, Enrile talked about the rise of the Inquirer and what led to the split between him and Inquirer's founding chairman Eggie Apostol.

In a way, Gigi Reyes brought this latest controversy upon herself. Cayetano apparently got furious over a radio interview that Reyes granted on Monday, January 21, to ABS-CBN's Karen Davila, in which Reyes called him and other Enrile critics "hypocrites." Reyes said they had accepted cash gifts in previous years but never complained about it then. 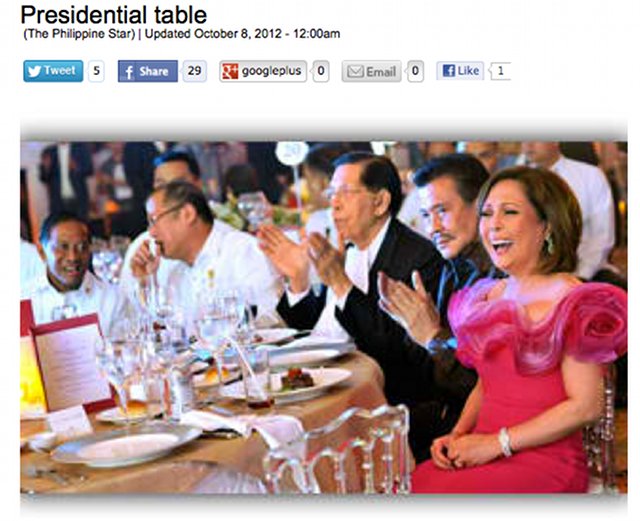 Cayetano did not say in his Wednesday speech that Enrile and Gigi Reyes are a couple, but his narration of the power that Enrile allows her to exercise made netizens closely following the Senate drama ask.

It revived old talk about an alleged "affair" that Enrile already denied.

Fifteen years ago, in 1998, the Chicago Tribune newspaper reported that Enrile's wife Cristina had left him. "Enrile is not the president, but his alleged tryst with a top aide prompted his wife of 40 years to leave him this week with the public quip that she no longer could tolerate his chasing after other women, including domestic helpers, cooks and assistants," the Chicago Tribune report said.

This story prompted Enrile to make a public statement. In 1998, he said: "What is totally false and malicious are the reports in the press and the rumor mills that the cause of our marital difficulties is an alleged relationship between me and my Chief of Staff, lawyer Gigi Reyes. There is no relationship, other than an official and professional one." (Read his statement here.) - with reports from Ayee Macaraig in Laguna/Rappler.com