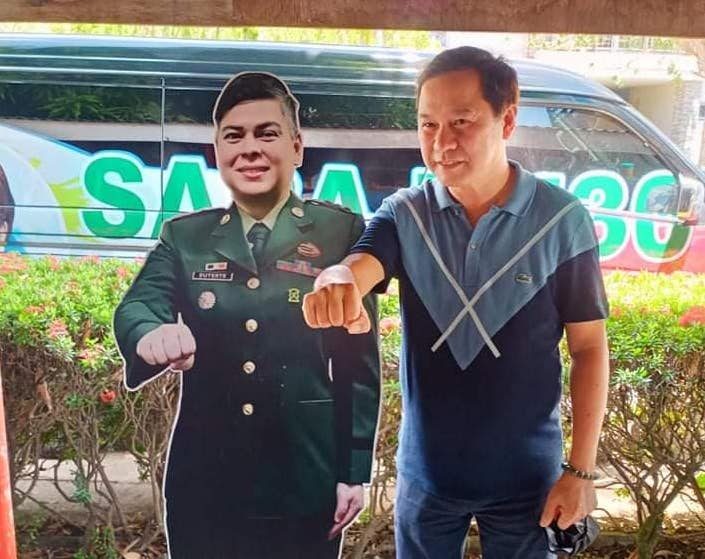 LOYALIST. Biliran governor Rogelio Espina does the Duterte fist in September 2021 beside a standee of Davao City mayor and vice presidential aspirant Sara Duterte, his candidate together with presidential candidate Ferdinand Marcos Jr., in the May 2022 polls.

In a Facebook post on Wednesday, February 16, the governor announced that the ruling “Bando Espina” group — composed of members of the Espina clan and their political allies — will be conducting meetings with different sectors in the island province to campaign for the UniTeam candidates.

“We need to once again unite and ensure the future for our dear province,” his post said after thanking supporters and friends.

He also urged his clan’s supporters not to join other formations backing the tandem.

“Let us not, however, join any other parallel organization who are also supporting BBM/Sarah since some of these groups have other political agenda in mind,” Espina said.

Governor Espina, who belongs to the Nacionalista Party, was supposed to run for reelection but withdrew his certificate of candidacy on November 15, 2021.

His son Gerard, the mayor of Naval town, substituted for him in the gubernatorial race and faces Edgardo Sorne Ambe of the PROMDI party.

Biliran, an island province in Eastern Visayas, has 123,232 registered voters for the 2022 elections this May 9.

The Espina clan has dominated the political scene in Biliran province for decades. Their patriarch Gerardo Espina, Sr was its first congressman, elected in 1995. Biliran was a sub-province of Leyte before it transitioned as a regular province in 1992.

The elder Espina had also served  as a member of the 1971 Constitutional Convention. He became an assemblyman of the Marcos rubber stamp Batasang Pambansa in 1978 until 1984 and was Assistant Majority Leader.