ACQUITTED. Retired CPP and NPA leader Rodolfo Salas is shown here in this file photo after he was arrested in his Angeles City home on February 18, 2020.

In the newest court victory by activists, a judge in Angeles City, Pampanga, has acquitted former Communist Party of the Philippines (CPP) chairman and New People’s Army (NPA) commander Rodolfo Salas of illegal possession of firearms, ruling that the warrantless search conducted on his house was illegal.

“The search conducted is clearly in violation of the constitutional right of the accused against unreasonable search and seizure. As a consequence, the firearm and ammunitions confiscated from the accused are inadmissible as evidence in court applying the exlcusionary rule Article III Section 3(2) for being fruit of the poisonous tree,” said Angeles City Regional Trial Court (RTC) Branch 58 Judge Ramon Corazon Blanco in a decision dated July 1 but served to Salas only on Friday August 6.

Salas was arrested on February 18, 2020, on the power of a warrant of arrest from 2019 issued by the Manila Regional Trial Court (RTC) in a murder case alleging a mass grave in Leyte of victims of the so-called purge of communists. The warrants were issued against Salas, CPP founder Jose Maria “Joma” Sison, National Democratic Front (NDF) senior adviser Luis Jalandoni and others in a still ongoing crackdown by the Duterte government on the Left.

Salas, who was described by his lawyers as “long retired from the CPP” and was “rebuilding his life with his family in Angeles City,” was charged with a new case of illegal possession after police supposedly found a pistol and ammunitions in plain view inside his house when he was arrested.

The illegal possession of firearms case was bailable, but the murder case was not. But in March 2020, after oral arguments in the Supreme Court, the justices granted Salas bail for the murder case. He’s been free since then.

The murder case in Manila is still pending.

The illegal possession case was won on demurrer by Salas’ lawyers, the Free Legal Assistance Group (FLAG). A granted demurrer means Salas did not have to present evidence because as the judge said, “the prosecution’s case has no leg to stand on.”

Because they had no search warrant, the three arresting agents claimed that they saw a handgun and ammunitions in plain view on the computer table, when Salas got his eyeglasses from the same table to be able to read his warrant of arrest.

Plain view doctrine, in general, allows law enforcement officers to seize items they may see in plain view and which they think could be evidence of a crime.

The barangay official, who was a required witness to the executions of the warrant, testified that he stood by the door of the house of Salas for 30 minutes. That statement was contrary to the police’s claim that the barangay official was inside the living room the whole time.

The barangay official also said that in the 30 minutes he was by the door, he didn’t see the gun and ammunitions on the computer table. He saw the said weapons only when he was told to come near the table and sign a document.

On further grilling during trial, one of the police officers said they actually searched all the rooms in the house upon the consent of Salas’ partner.

The pistol was traced to Salas but the license had long expired. Still, the judge said the pistol was seized in an illegal way.

“Lingering doubts now arise if they indeed saw the confiscated items in plain view or a product of a deliberate, intentional and meticulous search, thus violating the constitutional right of the accused against unreasonable search and seizure making the seized evidence proverbial fruit of the poisonous tree,” said the judge.

The prosecution later claimed that it was a valid search incidental to a lawful arrest.

“Be that as it may, even in a hypothetical scenario, the warrantless search has no reasonable factual basis because the accused did not exhibit any overt act that would put them into danger or any injury or the accused will destroy the evidence,” said the judge.

This win was the latest in a streak of victories for activists who were searched, and were found with illegal firearms and explosives. Activists have accused authorities of planting these evidence.

As a response to mounting calls from human rights groups, the Supreme Court is reviewing relevant rules, has scrapped the power of Manila and Quezon City judges to issue search warrants for faraway places, and has required the police to wear body cameras when executing warrants.

Salas’ lawyer Camille Parpan from FLAG said that as learned in this case, “it would also be helpful for the litigation of cases if the barangay officers present in the service of warrants would also be required to use body-worn cameras and/or recording devices to prove their presence in the operation.”

Presumption of regularity has always been invoked by law enforcers in these types of cases, but for Salas, the judge said the presumption was rebutted.

“This concept of law is a mere presumption that can be rebutted – in this case by the testimony of their own witness in the person of Kagawad Buenafe and the contradiction that flowed from their own mouths,” said the judge. 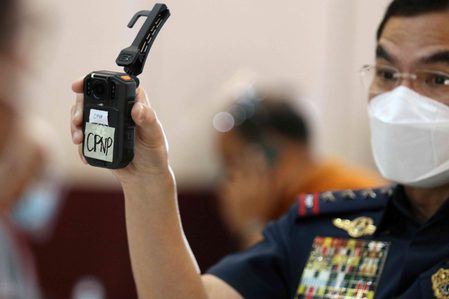