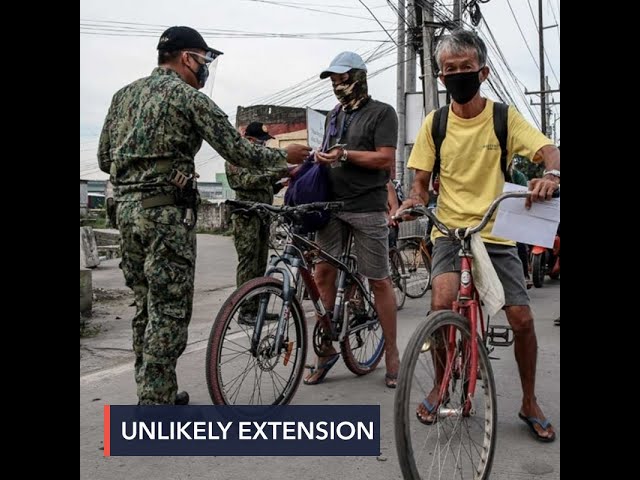 The extension of modified enhanced community quarantine (MECQ) in Metro Manila and nearby provinces is unlikely given the lack of funds to extend assistance to affected Filipinos and the huge blow to the economy, Malacañang said on Tuesday, August 11.

“Anything is possible but highly unlikely,” said Presidential Spokesman Harry Roque on Tuesday, when asked if an MECQ extension was possible.

He, however, made it clear that there was no final decision yet by the Inter-agency Task Force on Emerging Infectious Diseases (IATF-EID) or President Rodrigo Duterte.

Roque explained the difficulties of another two weeks of MECQ after August 18, the end date of the current MECQ declaration.

“If we can give aid, then maybe we can extend this stricter quarantine but the bottom line is our resources for assistance are getting wiped out,” said Roque in a mix of English and Filipino.

The night before, Duterte also appeared hesistant to put Metro Manila under MECQ again, saying the government’s funds for subsidies are already “depleted.”

While citing supposed lack of funds for a longer lockdown, the Duterte government is also urging Congress to pass a new law that will provide funds for assisting displaced workers and low-income households.

This proposed bill, the Bayanihan to Recover as One bill, is among the priority legislative measures Duterte mentioned in his 5th State of the Nation Address last July.

If passed and signed by Duterte, funds that the Chief Executive says are running out fast now should be restored.

The Senate version of the bill features a P140-billion standby fund while the House version provides for a larger fund, P162 billion.

While Duterte’s coronavirus task force acknowledges that the “best way” to curb the virus’ spread is to extend MECQ, Roque said people might “die” from lack of income if the tighter quarantine classification, which prohibits many businesses from operating, continues.

There is a larger economic consequence to another MECQ period. Roque said Metro Manila is losing “P18 billion” every day that it remains under this classification.

The spokesman also reminded Filipinos that Duterte only placed the megacity under MECQ because of an appeal from medical frontliners. The medical community earlier proposed a two-week lockdown in Mega Manila, but this should be complemented by proposed measures to win the “losing battle” against COVID-19.

Before that, he had already decided to continue Metro Manila’s GCQ classification. The capital region had been under GCQ from June 1 to August 3.

Finance Secretary Carlos Dominguez III is one of the Cabinet members strongly pushing for easing restrictions on Metro Manila and Calabarzon, saying 67% of the country’s economy depends on these regions. – Rappler.com