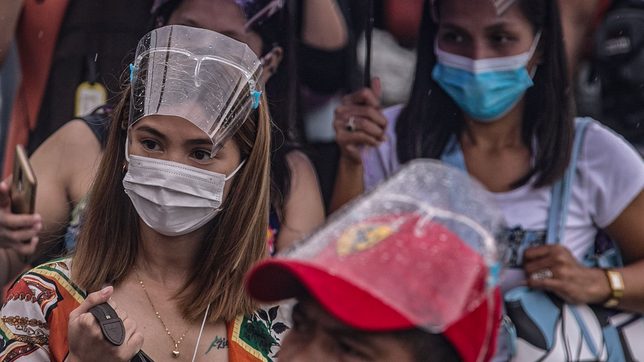 ADDITIONAL LAYER? Commuters brave the rain with face shields protecting their heads from the heavy rain due to Typhoon Ofel along Quezon Ave in Quezon City on Wednesday, October 14, 2020.

The City of Manila on Monday, November 8, announced the use of face shields would be “non-mandatory” in the city except for medical and hospital facilities.

In Manila’s Executive Order no. 42, series of 2021, which took effect immediately, Manila Mayor Isko Moreno cited the pending assessment of the city council on the use of face shields.

“Now, therefore, I, Francisco “Isko Moreno” Domagoso, City Mayor of Manila, by virtue of the powers vested in me by law do hereby order that, pending the review by the Sangguniang Panlungsod of the city ordinance on the matter, the wearing of face shields in the City of Manila is non-mandatory except in hospital setting, medical clinics, and other medical facilities, which shall remain to be mandatory,” the Moreno said in the order.

During the government’s Laging Handa briefing on November 4, Interior Undersecretary and Spokesperson Jonathan Malaya said Eduardo Año, Secretary of the Interior and Local Government, will propose the lifting of face shields in the next meeting of the government’s anti-COVID-19 task force.

According to Malaya, the Department of the Interior and Local Government will recommend to local governments to gradually lift the mandatory use of face shields except in hospital settings.

Moreno, in the executive order, also cited Año’s pronouncement on the use of face shields. The Manila mayor also mentioned the de-escalation of Metro Manila’s to Alert Level 2.

In an interview with GMA’s DZBB on Monday, Metropolitan Manila Development Authority chair Benhur Abalos said that he would tell the COVID-19 task force to lift the face shield requirement.

(We [Metro Manila mayors] talked about face shields. Number one, I would tell the IATF to remove the face shield requirement, and make it non-mandatory except for critical places.)

Health Undersecretary Maria Rosario Vergeire also said during a Monday press briefing that the Department of Health will meet with the government’s pandemic task force on November 11 to present its “updated” recommendation on the use of face shields.

“We have committed to the IATF that by Thursday we will be presenting to them an updated recommendation for the use of face shields,” Vergeire said.

The health spokesperson urged local government units to hold their orders until the IATF releases a new policy on the use of face shields.

Currently, face shields are only required in areas identified as “3Cs”: closed, crowded, and close-contact. Face shields are not required in outdoor areas, as reiterated by President Rodrigo Duterte during his public address on September 22.

In August this year, World Health Organization (WHO) Representative to the Philippines, Dr. Rabindra Abeyasinghe, said they would look into the experience of the Philippines on the use of face shields as protection against COVID-19. The WHO official said that while the Philippines was able to “sort of delay the speed of the Delta variant is transmitting, we don’t know if face shield is a contributing factor.”

The government’s purchase of “overpriced” face shields was also the current subject of the legislative’s hearings due to the health department’s supposed mismanagement of funds. The Commission on Audit flagged the government for buying face shields in April 2020 for P120 a piece, which senators labelled as “overpriced.” 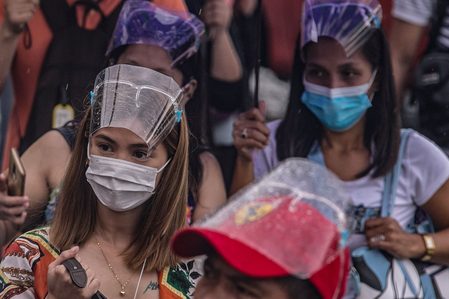 At present, both the WHO and the US Centers for Disease Control and Prevention still have no recommendations to require the use of face shields as protection against the deadly virus. – Rappler.com