A mass presided by Fr. Bobby Yap, SJ, with other Jesuit priests as concelebrants, was offered at the Church of Gesu in Ateneo de Manila University, for the commemoration of the first death anniversary of the late President Benigno Simeon Aquino, on Friday, June 24. Fr. Jet Villarin, SJ, gave the homily. Photos by Angie de Silva/Rappler

Facebook Twitter Copy URL
Copied
On his first death anniversary, the late president Noynoy Aquino's eldest sister Ballsy Aquino-Cruz recalls one of his most famous quotes, 'The Filipino is really worth fighting for' 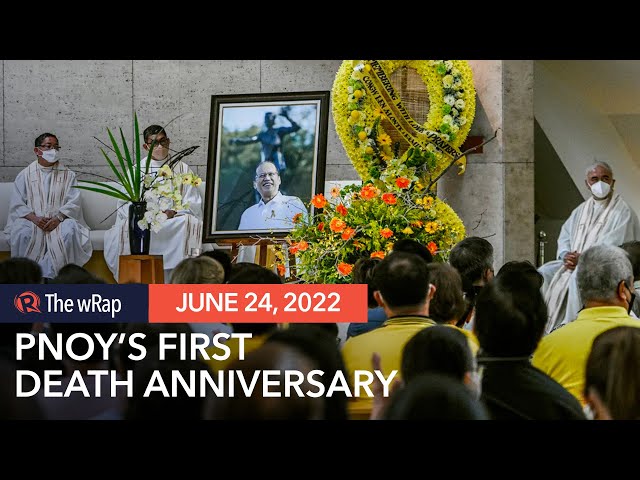 MANILA, Philippines – Family, friends, and allies of the late former president Benigno “Noynoy” Aquino III gathered together in a solemn Holy Mass to mark the first year since his passing, remembering the legacy of good governance he left behind.

The people closest to Aquino started arriving at the Church of the Gesú in the Ateneo de Manila University early Friday morning, June 24. It was also the same place where Aquino’s supporters gathered together for three days after he died of renal disease secondary to diabetes a year ago.

Aquino was a “true blue” Atenean, having finished his grade school, high school, and college education in the blue school along Katipunan Avenue.

Just outside the church’s doors, Aquino’s longtime household staff Yolly Yebres helped man a booth where caps and ballers bearing Aquino’s face and name were made available for guests to get for free.

Yebres and two of Aquino’s security aides were the ones who discovered his lifeless body inside his room in his house in Quezon City a year ago. He died peacefully in his sleep at the age of 61.

Among those present during the Mass were Aquino’s sisters Ballsy, Pinky, Viel, and their respective families. His celebrity sister Kris Aquino is currently in the United States undergoing treatment for her ultra-rare disease EGPA. Key opposition figures such as outgoing vice president Leni Robredo, Senate Minority Leader Franklin Drilon, Senator Kiko Pangilinan, and former interior secretary Mar Roxas were among those who attended the gathering.

There was not much talk about politics during the service, only a quiet homage to the values and principles that Aquino represented when he was the most powerful man in the Philippines: accountability, transparency, and his refusal to throw his weight around just because he was the President.

In his homily, Jesuit priest Jose Ramon Villarin, former Ateneo president, likened the meaning of the Sacred Heart of Jesus to a life lived in service of others.

At the end of the Mass, Aquino’s eldest sister Ballsy Aquino-Cruz thanked all of those who joined the Mass in person and virtually. She considered them the “true friends” of Aquino, who stood by him even when critics relentlessly attacked him after his presidency.

“A year ago, our hearts fell apart when Noynoy breathed his last. But we returned him to our Creator with gratitude for the blessing that he was: a simple, honest, self-effacing, and decent Filipino who gave his all without fanfare when he was tasked to serve his bosses,” said Cruz.

She also recalled one of Aquino’s most iconic lines when he was alive, which he delivered during his State of the Nation Address in 2014.

“May I ask you to join me in considering what he said, and I quote, ‘May you always believe, just as I do, that the Filipino is really worth fighting for. That the Filipino will indeed rise up to the occasion, that God has a good plan for all of us and this will take place in his time. Keep the faith, know that this is just a phase,'” Cruz quoted her brother as saying. 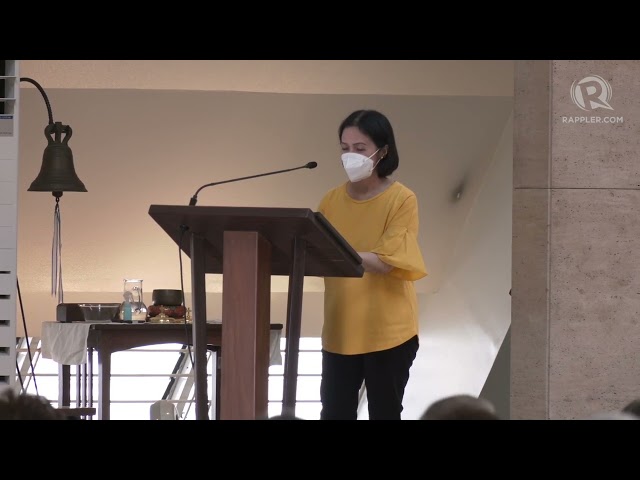 Ateneo de Manila University president Roberto Yap also said Aquino will always be remembered for serving the Philippines “with honor and dignity,” and for elevating the country’s status in the world stage.

“President Noy’s love for our country and our people, especially the poor and the marginalized, is unquestionable. In the face of a planet in emergency mode, a chaotic political environment, wars in different places, disinformation and misinformation and a heavily fractured society, we ask for President Noy’s prayers that Ateneo and Ateneans become true beacons of God’s love and light in our world,” said Yap.

He announced that the endowment fund named after Aquino has raised P15 million, which would fund the Ateneo education of several scholars hailing from outside Metro Manila. 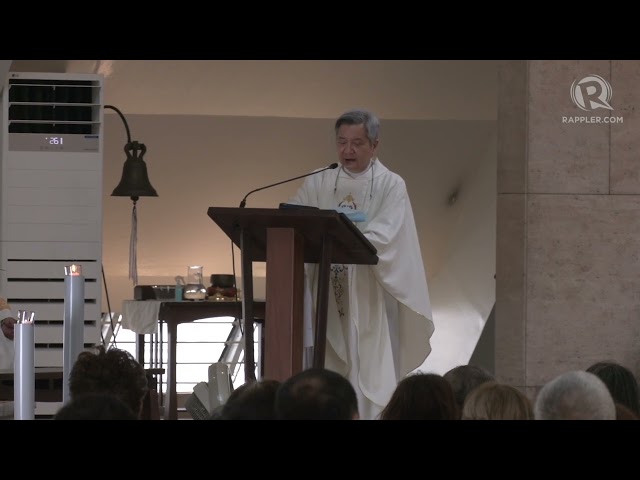 Most of the Mass attendees wore clothes or face masks in the color yellow – a sign of support for the dead president. Yellow was the color of protest closely associated with Noynoy and his late parents, democracy icons former senator Benigno “Ninoy” Aquino Jr. and former president Corazon Aquino – opposition figures against the dictatorship of Ferdinand Marcos Sr.

They no longer saw the rise to the presidency of the dictator’s only son and namesake Ferdinand “Bongbong” Marcos Jr. in the 2022 elections.

Noynoy Aquino first entered politics as congressional representative of Tarlac’s 2nd District. After serving three consecutive terms as congressman, he ran a successful bid for the Senate and served as senator from 2007 to 2010.

He initially had no plans to gun for Malacañang in the 2010 elections, but Aquino eventually sought the presidency following public clamor after his mother’s death in 2009.

Aquino would be remembered as the Philippine leader who brought China to court and challenged Beijing’s false claims over the West Philippines Sea. The Philippines would later win the case in July 2016, a month after Aquino’s term ended.

His efforts to revive the peace process in Mindanao also paved the way for the preliminary peace agreement between the government and the Moro Islamic Liberation Front, which later culminated in the creation of the Bangsamoro Autonomous Region in Muslim Mindanao.

Aquino remained a largely popular leader for most of his presidency – until the Mamasapano incident on January 25, 2015, where 44 elite cops were killed in an operation that targeted terrorists Abdulbasit Usman and Malaysian bomb maker Zulkifli Abdhir, better known as “Marwan.”

Despite this, his final public grade was “very good,” according to pollster Social Weather Stations. – Rappler.com