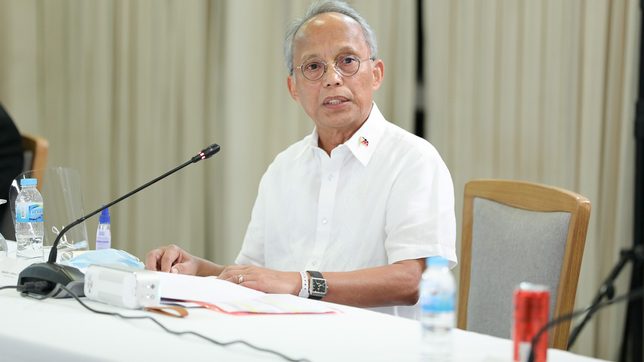 ENERGY CHIEF. Energy Secretary Alfonso Cusi gives an update to President Rodrigo Duterte during a meeting with the Inter-Agency Task Force on the Emerging Infectious Diseases core members in Davao City on September 2, 2021.

The family of the late Benguet Electric Cooperative (Beneco) general manager Gerardo Versoza has demanded a public apology from Energy Secretary Alfonso Cusi for supposedly dragging him into the leadership squabble in the cooperative.

In a letter to Cusi dated October 25, Kalinga Representative Allen Jesse Mangaoang said the statement the energy chief had made in an interview with Karen Davila on ANC “tarnished the image” of his brother-in-law.

Asked about the October 18 early dawn takeover of the National Electrification Administration of the Beneco headquarters during the ANC interview, Cusi included Versoza’s death, as well as the cause of his demise, in his explanation.

“It all started when Beneco prevented the assumption into office by the newly installed GM, kasi nagsuicide po ‘yung dating GM ng Beneco for an unknown reason and an OIC was installed…. Tapos ngayon nagkaroon po bagong GM na naselect po ng NEA and that is being opposed by the previous OIC and the board of directors of Beneco,” Cusi said.

(It all started when Beneco prevented the assumption into office by the newly installed GM, because the former GM of Beneco committed suicide for an unknown reason, and an OIC was installed…. Then now, we have a new GM that was selected by the NEA and that is being opposed by the previous OIC and the board of directors of Beneco.)

Versoza died on September 16, 2020. The family did not reveal the cause of his death and asked for “prayers, respect, and privacy” at the time. Police reported that he was found dead with a gunshot wound, inside his vehicle, and was declared dead upon arrival at the hospital.

“We find it illogical for you to conclude that the cause of his taking his life is due to Beneco being ‘troubled’ or is related to the prevailing issues confronting Beneco now, which the National Electrification Administration-Board of Administrators under your stewardship actually created,” Mangaoang said.

“Our family is deeply saddened by your failure to tell the truth in the interview. We, therefore, condemn in the strongest possible terms your insensitive, malicious, baseless, unfair, and unethical remarks in trying to put the blame on the very person who took the extra mile to put Beneco on the highest pedestal of the country’s power industry over the past three decades,” he said.

“We demand that you issue a public apology for what you have done to a defenseless person and to the surviving members of his family because what you have recently done will certainly cause them sleepless nights and bring back the anguish that they had experienced when they lost their loved one,” the congressman added.

He said that the family is “still grieving from this loss, and such irresponsible and insensitive remarks will not help us in any way to recover from such a tragic incident.”

The congressman also told Cusi that the family is looking into “the possibility of taking the appropriate legal action against you for such a senseless, illogical and irresponsible remarks against an icon in public service.”

“We will be waiting for whatever action that you will undertake before we proceed with the appropriate steps for you to correct the very wrong impression that you have painted on a beloved member of our family,” he said.

Mangaoang noted that Verzosa took the helm of Beneco in the 1990s and managed to put together a team that turned Beneco from an “ailing cooperative” to “the benchmark of the operations of all electric cooperatives in the country.

In a statement on Versoza’s death last year, Baguio City Mayor Benjamin Magalong said that Verzosa “played a key role in catapulting Beneco into being one of the country’s top electric cooperatives committed not only to fulfilling the tenets of rural electrification but also of community building and corporate social responsibility.”