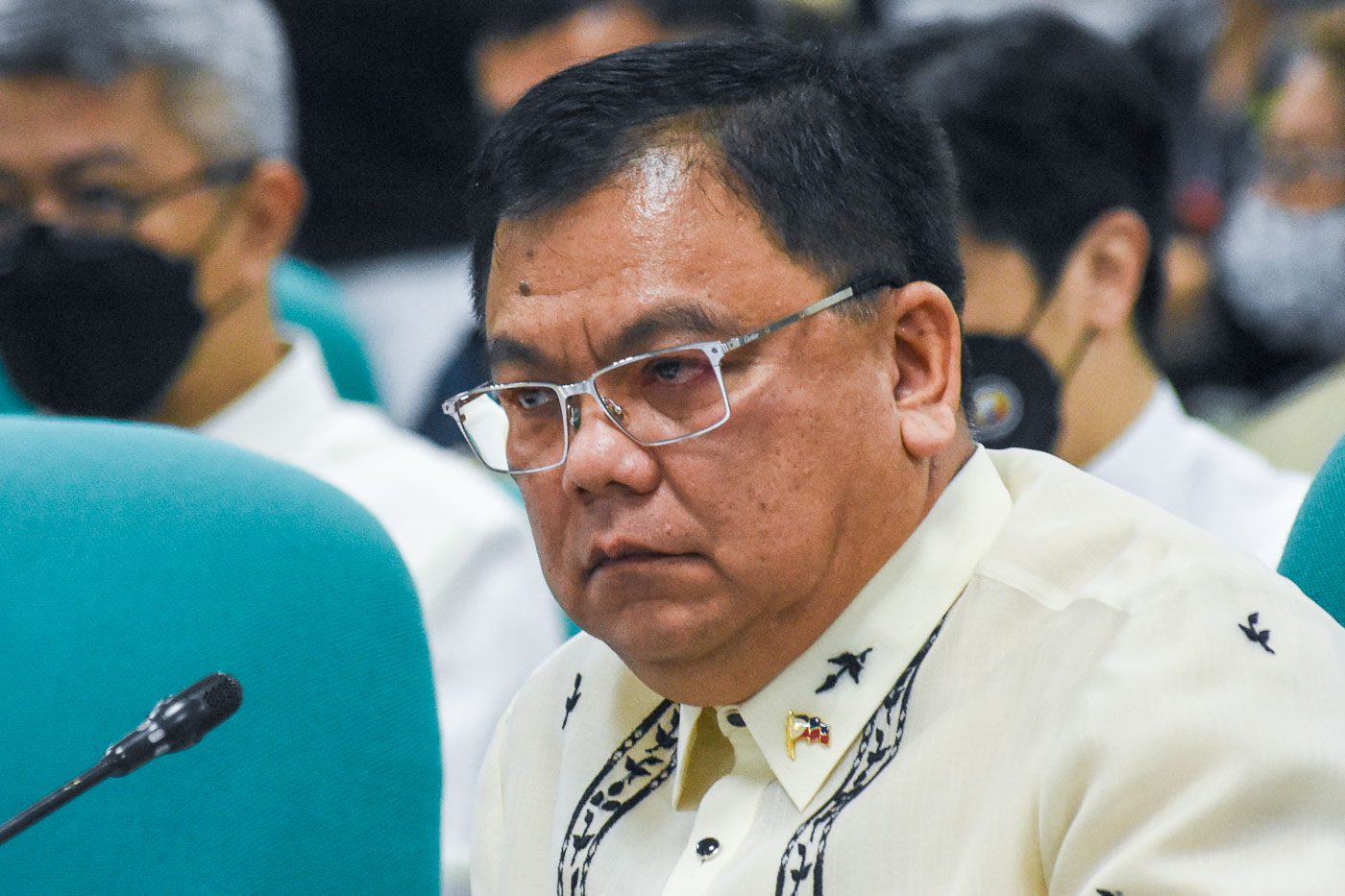 PHILIPPINE DEFENSE. Defense Secretary Jose Faustino Jr. attends the hearing on the 2023 budget of the Department of National Defense and its attached agencies and corporations at the Senate on September 27, 2022.

Facebook Twitter Copy URL
Copied
(1st UPDATE) The former acting defense chief was kept out of the loop, saying he only learned of General Andres Centino’s appointment as military chief from news reports

MANILA, Philippines – Former Department of National Defense (DND) officer-in-charge Jose Faustino Jr. broke his silence on Tuesday, January 10, citing the reappointment of General Andres Centino as chief of the Armed Forces of the Philippines as the reason for his resignation as the country’s top defense official.

Faustino, who had been leading the defense agency in an acting capacity since June 2022, said he had only learned about Centino’s appointment through media reports on Friday, January 6, prompting him to submit his letter of resignation to President Ferdinand Marcos Jr. thereafter.

“With the utmost respect, I submitted my irrevocable letter of resignation to the President, His Excellency Ferdinand R. Marcos Jr., on Friday, January 6, 2023, after learning only from news and social media reports that an oath of office of the new Chief of Staff, AFP had taken place at Malacañang,” Faustino said in a statement to media on Tuesday morning.

Rumors of Faustino’s resignation spread after he had been noticeably absent at the AFP’s turnover ceremony over the weekend.  The change of command marked the second time Centino held the top post of AFP chief, after first vacating the position in August 2022.

Faustino was replaced by retired general Carlito Galvez, who had been offered the post just two days after Centino’s appointment.

Malacañang on Monday said it accepted Faustino’s resignation as it released photos of Marcos meeting with Galvez. Galvez, a former AFP chief, is most known for leading troops in the liberation of Marawi City in 2017, and for implementing the country’s peace plan with the Muslim secessionist movement, as well as the government’s plans to curb the spread of COVID-19.

The series of top-level changes in the military has sent shockwaves throughout the defense sector, with the Marcos administration’s current reorganization efforts bypassing the military’s usual vetting processes.

In the selection of an AFP chief of staff, the Board of Generals vets nominees for the post, with the defense secretary later sending a short list for the President.

Despite appearing to have been kept out of the loop with Centino’s appointment, Faustino expressed his continued trust in the military and vouched for the credibility of the AFP, “an institution that is loved, trusted, and respected by the Filipino people.”

“It is an upright organization that is professional, highly capable and committed to protecting our country and people from all threats, whether foreign or domestic. Our dedicated and indomitable soldiers, airmen, sailors, and marines value above all honor, service, and patriotism – these are the ideals that we live and die for, if need be,” he said.

He added,  It is a highly disciplined and competent organization that will survive under any given circumstance. Thus, fully cognizant of the selfless sacrifice and courage of our troops and civilian human resources, I cannot allow the AFP’s reputation to be tarnished, maligned, or politicized. I assure everyone that I will always hold the AFP in high esteem, which its men and women have painstakingly earned.”

Even before resignation rumors spread following Centino’s reappointment, Faustino was in an awkward place considering Marcos did not give him the full title of secretary as soon as he was eligible in November 2022.

Up until then, Faustino held the post in an acting capacity because he had not yet reached the one-year lapse for an officer after retirement to be appointed to a civilian post.

Asked why Faustino had not been appointed full-time to the role. In December 2022, Marcos only told reporters he was “happy with the situation [in the DND] as it is now.”

But in the same interview, Marcos did not rule out possible changes. “These things are revisited especially every year at the end of the first year,” he said.

On Tuesday, Faustino thanked the DND and expressed gratitude for the post.

“I wish nothing but the best for our country, our people, and our President. It was an honor to have had the opportunity to serve the Filipino people in my former capacity as officer-in-charge of the DND,” he said. – Rappler.com