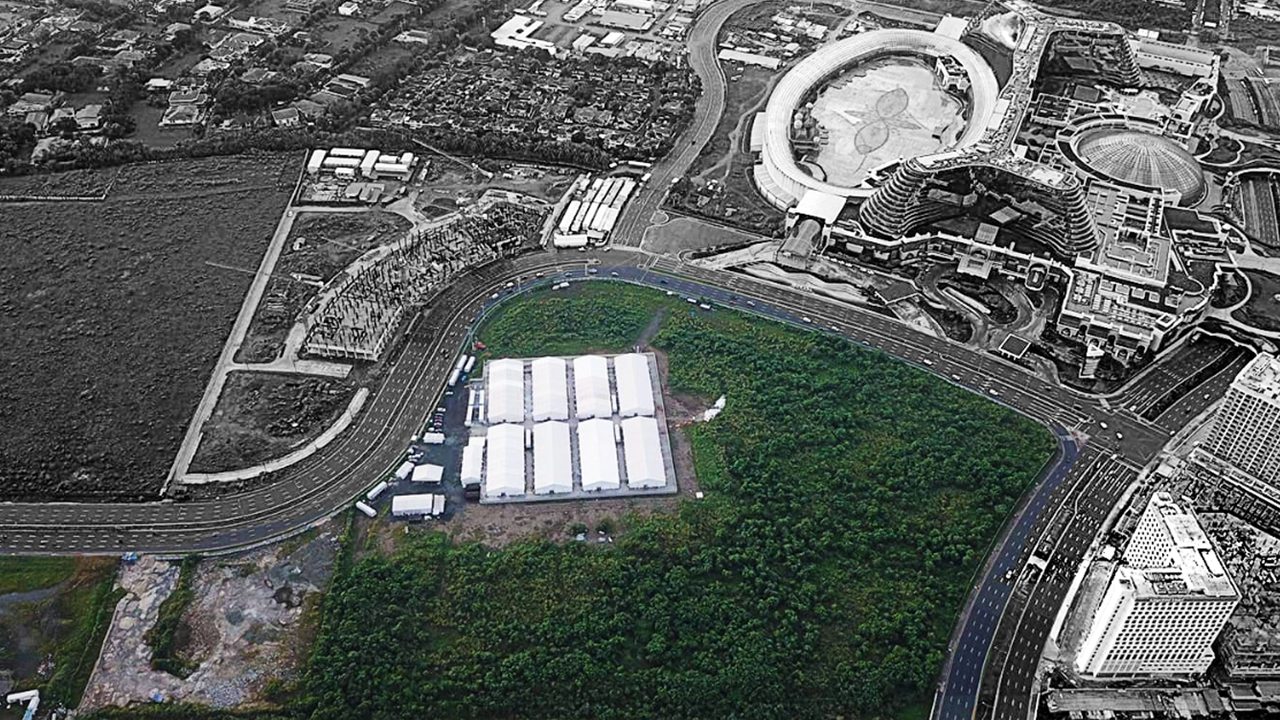 RECLAIMED LAND. The site of the proposed 'mega vaccination site' in Parañaque City.

Facebook Twitter Copy URL
Copied
The Nayong Pilipino Foundation opposes the vaccination facility, saying trees would be cut. Vaccine czar Carlito Galvez Jr responds that it is 'inappropriate for the NPF to equate the fate of 500 ipil-ipil trees' with Filipinos' lives.

The proposed construction of a “mega vaccination site” on reclaimed land owned by the Nayong Pilipino Foundation (NPF) sparked a feud between the Duterte administration and the foundation itself along with environmental groups.

In a statement on Sunday, May 9, vaccine czar Carlito Galvez Jr said time is of the essence for the vaccination center’s construction.

“Work on the facility should have commenced weeks ago, but so far, not a single brick or panel has been laid,” he said.

The planned vaccination center on reclaimed land at Entertainment City in Parañaque City, said Galvez, “will help accelerate the implementation of our national vaccination program, as it will enable us to vaccinate around 10,000 individuals daily.”

The NPF is already hosting a quarantine facility, operated by the Armed Forces of the Philippines, on the property.

But the NPF on Thursday, May 6, raised legal and environmental concerns about the planned vaccination site, which would be built near the quarantine facility.

It emphasized that the property is “not a vacant lot but has a thriving urban forest that hosts a variety of urban wildlife and is the last remaining grassland in the reclaimed area of Parañaque.”

“The abrupt cutting of close to 500 trees and other site works on the NPF property will kill the existing ecosystem. Once lost, it could take decades to recover this ecosystem. A mega vaccination facility that will destroy this ecosystem would be a disaster and a disservice to the residents of Metro Manila who need more green and open spaces,” the NPF said.

NPF Executive Director Lucille Karen Malilong Isberto, among those who voiced these concerns, has already resigned, reported the Manila Bulletin.

Galvez, who is also the chief implementer of the National Task Force Against COVID-19, said on Sunday that the government is not downplaying the NPF’s position, “but it must surely know the urgency of the situation our nation is confronting.”

Addressing the environmental issues, Galvez said those have been “carefully considered.” The ICTSI Foundation of billionaire Enrique Razon Jr, in charge of the vaccination center’s construction, got the services of renowned architect Felino Palafox Jr, Galvez noted.

“Considering Mr Palafox’s track record, we are confident that he has already factored in the environmental impact of the project in the design of the vaccination center. He said that he respects the environment and will make sure his firm’s design will reflect this belief,” said Galvez.

The vaccine czar further defended the project, saying that it is “inappropriate for the NPF to equate the fate of 500 ipil-ipil trees with the lives of hundreds of thousands if not millions of Filipinos.”

“Moreover, the proposed site of the facility is a reclaimed piece of land and not a protected forest or a marine sanctuary,” he continued.

“We would like to emphasize that the government deeply cares for the environment. But as the pandemic wreaks havoc on the lives of our people and our economy, we have to make the choice. ‘Green and open spaces’ will be useless if there will be no one to visit them,” added Galvez.

Borrowing an adage, Galvez warned against not seeing the forest for the trees, especially in the middle of the pandemic. “Put in another way, it means that we fail to see the bigger picture because we are caught up in the details or technicalities of the issue we are trying to resolve.”

Galvez then urged the NPF “to heed our call and sign the MOA (memorandum of agreement) as soon as possible. We can no longer afford to waste time. The future of our people and nation depends on it.”

The feud had escalated further after Razon, chairman and chief executive officer of global port operator ICTSI, weighed in on the issue.

The Philippine Daily Inquirer reported on Saturday, May 8, Razon’s criticism against the NPF board, whom he called “idiots” over their opposition to the project. Razon questioned why they were supposedly prioritizing the land’s preservation over the lives of Filipinos who would be vaccinated.

Resigned NPF head Isberto told the Manila Bulletin on Sunday that Razon’s comments do not have bearing on the environmental management issues.

Galvez, for his part, said Razon “has offered to build the facility at no cost to the national government.”

This, Galvez also said, “reflects [Razon’s] deep concern for his countrymen and strong commitment to help the government in scaling up the nation’s COVID-19 response, mitigation, and vaccination efforts.” – Rappler.com