MANILA, Philippines – Assisted by an embassy staff, 100-year-old World War II veteran Technical Sergeant Sixto Navidad rose from his wheelchair to stand in attention when the national anthem of the Philippines and the United States were played.

He wore his now-oversized black americana coat on Thursday, September 13, to receive the US Congress Gold Medal in a ceremony held at the US embassy in Manila.

The audience, which fell into a hush to listen to an embassy staff read out Navidad's contributions during the war, erupted into a loud applause when it was announced he was 100 years old, the oldest among 13 recipients of the award on Thursday.

Navidad had a pensive look on his face, visibly honored by the ceremony and the applause. He was flanked by US Ambassador Sung Kim on one side and Philippine Defense Secretary Delfin Lorenzana and Undersecretary Ernesto Carolina on the other. US and Philippine Marines were standing in attention behind him to fly the flags of both countries.

His slow hands received the medal from the ambassador. He stared for a good while at the replica of the huge golden metal and then looked up at the high-ranking officials almost tearing up, prompting Kim and Lorenzana to pat him on the back.

He held the medal up for the audience to see as his wheelchair was rolled from the stage to join his fellow awardees.

The US Congressional Medal is the highest civilian award in the US, bestowed on a person or a group that performed an “outstanding deed or act of service to the security, prosperity, and national interest of the US.” 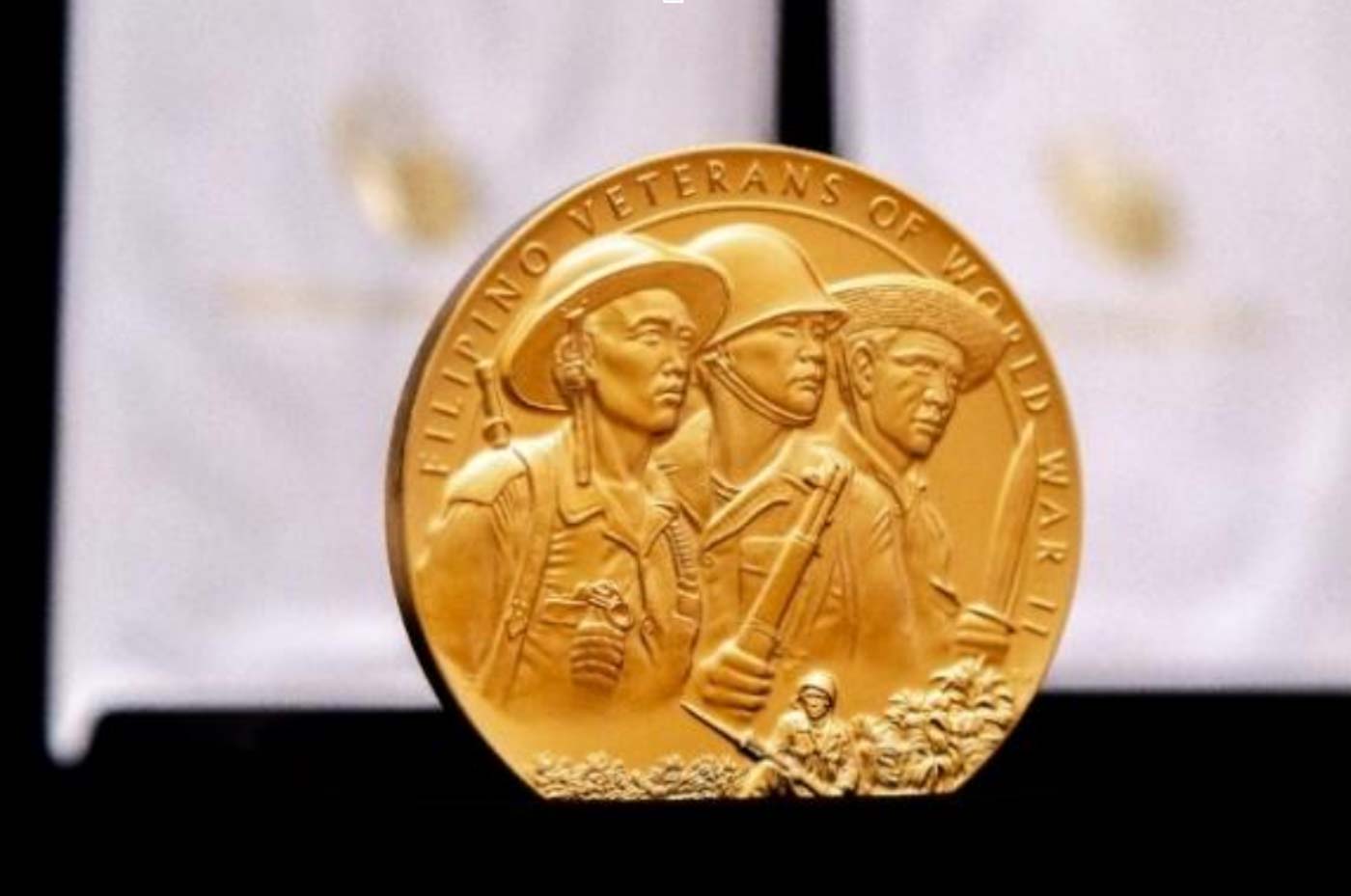 REPLICA. A bronze replica of the Filipino World War II Veterans Congressional Gold Medal is displayed during a ceremony at the U.S. embassy in the Philippines on September 13, 2018.

Navidad fought for the United States Army Forces in the Far East (Usaffe) from 1941 to 1945 under the 93rd Infantry, 91st Division, that was recognized for fighting the Japanese in defense of the Lingayen Gulf and Bataan. After the war, he continued to serve the Philippine Army until 1966.

The ceremony on Thursday was the first of such rites planned around the Philippines to give long overdue recognition to Filipinos who fought alongside the Americans in Bataan, Corregidor, and Manila, among other battles during the war.

In 1941, US President Franklin Delano Roosevelt called over 250,000 Filipinos and Filipino-Americans into service to fight with the Usaffe under commanders like General Douglas MacArthur. But President Harry Truman would later strip Filipinos of military benefits, triggering decades-long fight for Filipino veterans to obtain compensation.

“We pause to honor their lives and legacies. What they have freely given is beyond our power to repay. On this day, at this time, we recognize our debt for their sacrifices with deepest and profound appreciation,” Kim said in his speech during the ceremony.

“To the selfless Filipino soldiers who fought side by side with the American soldiers during World War II, you will always be remembered by our grateful nation. Thank you very, very much,” Kim said.

The ceremony on Thursday was a dream come true for the 13 recipients.

“I am overjoyed that after more than seven decades, we Filipino veterans of World War II, who fought side by side the United States Armed Forces, are finally getting the honor and recognition we deserve for our bravery and heroism, and our selfless sacrifice and dedicated service during the war,” said retired Colonel Paterno Viloria, whose unit supported US Rangers in the rescue of American prisoners of war in Nueva Ecija.

Viloria also served in the Korean War and continued his service in the Armed Forces of the Philippines until he retired in 1968. He's 95.

Lorenzana himself, who has 3 uncles who fought in the war, was moved by the ceremony. “That was very emotional to me. I almost cried,” said Lorenzana during the speech.

As former defense attaché to the US, Lorenzana played a role in the campaign to get US Congress to pass the law recognizing Filipino veterans. He recalled how the late Senator John McCain was among the lawmakers who supported the campaign.

The first ceremony to award the medals was held in the US in October 2017. It was decided that succeeding ones should be held in different parts of the Philippines. – Rappler.com