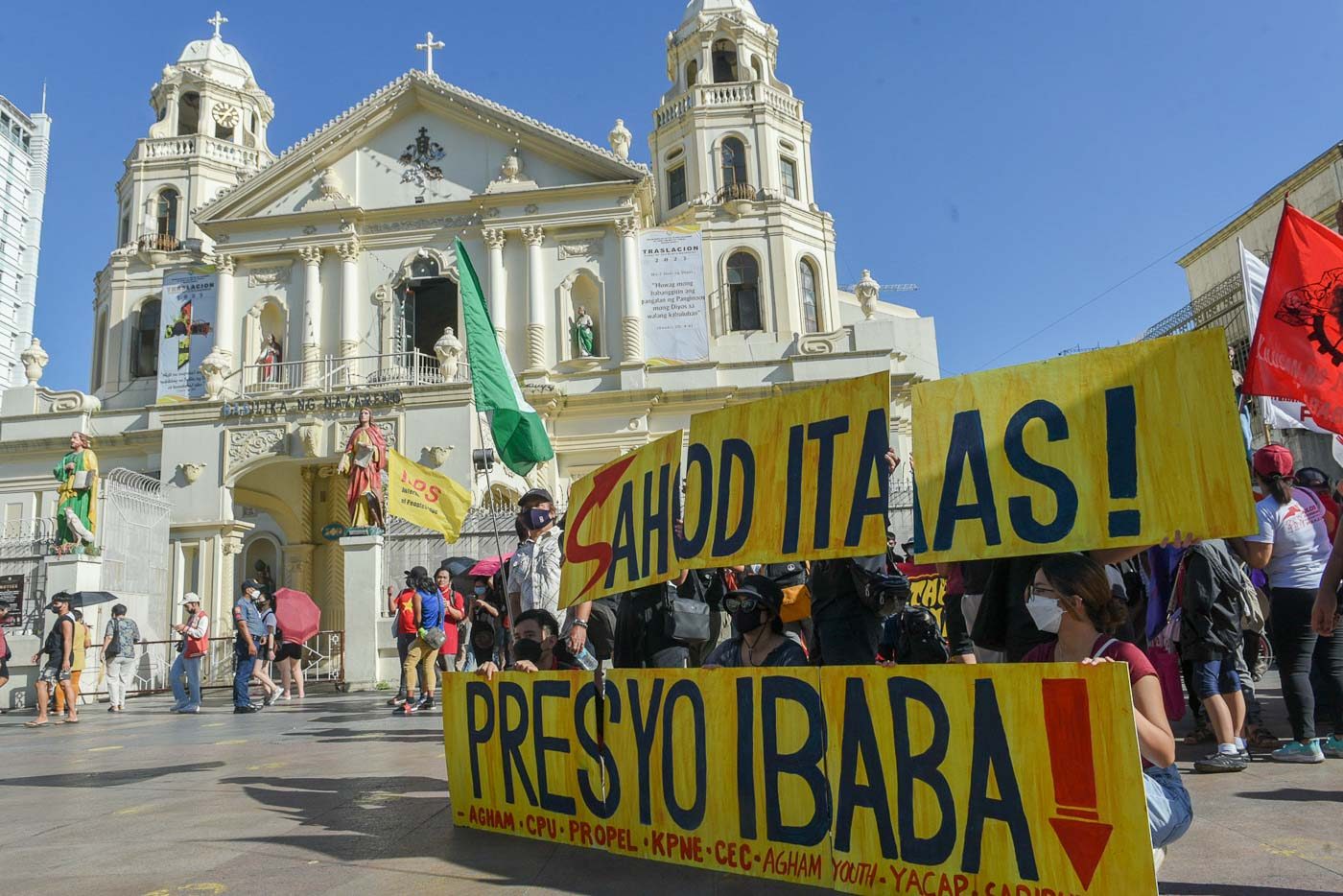 BONIFACIO DAY. Activists hold a protest rally at the Plaza Miranda in Manila, demanding a wage increase, on November 30, 2022.

It was the first commemoration of Bonifacio Day led by President Ferdinand Marcos Jr., who keynoted the flag raising and wreath-laying ceremony at the Bonifacio Shrine in Caloocan City.

For activists, Bonifacio would have supported the right to protest for important causes.

Wilson Fortaleza of Partido Manggagawa (PM) said Bonifacio’s struggle for independence and social justice “should be reinterpreted by today’s workers and the youth to understand the challenges of the situation.”

“Bonifacio has a clear concept of ‘kaginhawahan (prosperity)’ which to him can only be achieved under conditions of freedom and solidarity, conditions we enjoyed prior to colonization,” Fortaleza said, referring to the spirit of the Katipunan, described by Bonifacio as Kapatiran, Kabutihang-Loob, Kaginhawaan, Kalayaan (brotherhood, generosity, prosperity, freedom).

Progressive group Anakbayan held a protest at 9 am in Plaza Miranda, before making their way to Liwasang Bonifacio and then Mendiola. The protest will call for national democracy, the increase of wages, and the lowering of the price of goods.

Kabataan Partylist also joined demands for a general wage increase, lower prices of basic commodities, and cash assistance for the poor, noting that “young workers are the lifeblood of our labor force and deserve better and fair working conditions.”

“Instead of rushing the revival of Mandatory ROTC which is set to impose heavier economic burden on workers’ families and eat away funds for economic aid, pagpokusan natin ang pagpasa ng mga batas na magsusulong ng kabuhayan at pagbangon ng bansa sa pandemya (let us focus on passing laws that would provide more jobs and held the country recover during the pandemic),” he added.

Living out ‘Bonifacio’s story of heroism’

Akbayan celebrated Bonifacio Day with a vow to “build upon Bonifacio’s dream,” it said in a statement.

“We will take government to task as we confront the most pressing issues affecting every Filipino family– soaring inflation, the rising prices of goods, and the availability of meaningful and productive work.

“In the same vein, Akbayan will sustain the struggle against the ills that have plagued our laborers for so long. We will continue to fight for just wages, fair treatment of every worker, and an end to the oppressive practice of ENDO and contractualization. Defending the rights of our nation’s workers is the foundation of a truly humane society,” Akbayan added.

Migrante International called for the continued “fight for the ideals that Bonifacio devoted his life to – national freedom and democracy.”

“Let us continue his fight, which remains relevant 159 years after his birth and more than 126 years after the start of the revolution that he led. Our present is not the future that Bonifacio dreamed of and died for,” Migrante said.

In Cebu, left-leaning organizations held joint protests from Plaza Independencia to Colon starting at 9 am.

For LGBTQI+ advocate and content creator Mela Habijan, other advocates can learn from Bonifacio’s heroism in pursuing gender equality rights in the Philippines.

“Bonifacio’s story of heroism lies in his desire to free his fellows from oppression and discrimination,” Habijan said.

“He did not see himself as powerless, but rather a person worthy of the right to liberty and respect from others. No matter how tough and dangerous the fight was, he dared to pursue it. And this is what LGBTQIA+ people like me should emulate as we also fight for equality and human rights in the Philippines,” she added.

Public historian Xiao Chua says while it’s correct to celebrate Bonifacio’s bravery and heroism, it’s important for Filipinos today to also view him as someone who knew how to love, and showed Filipinos how to do the same.

Bonifacio’s most well-known poem, Pag-ibig sa Tinubuang Lupa (Love of the Motherland), talked about fighting for the country as an expression of love.

Cebu-based academic Laila Labajo, who teaches at the University of San Carlos, said that amid challenges of difficult social and economic conditions the average Filipino faces today, everyone can learn from Bonifacio’s dedication to fighting for justice.

“Bonifacio’s story is very relevant to all Filipinos…. It will inspire people to be humbly fighting for what is right and just. It will instill heroism and nationalism. That even in limited resources and very challenging times, Filipinos should rise up for self, others and for our country. Nothing will substitute with honesty, integrity and love of country,” Labajo said. – Rappler.com