BUDGETING. Members of women's group Gabriela, conduct a 'Palengke Challenge' at Quinta Market in Quiapo, Manila, to buy food with a P570 budget, the minimum wage for workers in the National Capital Region, on October 28, 2022.

MANILA, Philippines – Around 36% of adult Filipinos are dissatisfied with the response of President Ferdinand Marcos Jr.’s administration to inflation or controlling the price of basic goods, according to an October survey conducted by OCTA Research.

In the survey conducted from October 23 to 27, 33% of Filipinos said they are satisfied with the government’s response to inflation, while 31% are undecided. The survey had 1,200 respondents from across the country.

The poll sought to assess the people’s perception of some of the programs of the national government. The government’s response to inflation received the highest dissatisfaction rate in the list consisting of 23 government programs.

Reducing poverty followed the inflation response in the list with a 25% dissatisfaction rate.

In October, the inflation rate reached 7.7% – the highest in 14 years. From January to October, average inflation stands at 5.4%. 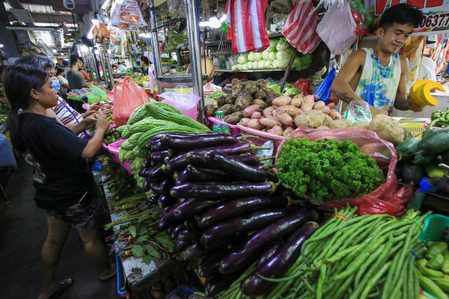 The Philippine peso also fell to its weakest against the US dollar at P59 in October.

A September 2022 survey by another pollster, Pulse Asia, showed 42% of Filipinos disapproved of the Marcos administration’s response to inflation.

The OCTA survey also showed that a huge majority of Filipinos were satisfied with the Marcos administration’s primary and secondary education programs. The Department of Education is headed by Vice President Sara Duterte.

At least 75% of Filipinos also approve of the government’s response to natural disasters.

In late September, Super Typhoon Karding left a trail of destruction as it crossed the Philippines. A few days after the disaster, on October 2, Marcos flew to Singapore to watch Formula One Grand Prix race.

OCTA surveyed 300 people in Metro Manila, 145 in North and Central Luzon, 155 in Southern Luzon, 300 in the Visayas, and 300 in Mindanao. The survey has a ±3% margin of error for national results. – Rappler.com