Filipinos take up fight for Hague ruling on its 5th anniversary Facebook Twitter Copy URL
Copied
Fisherfolk, business leaders, scientists, soldiers, and the academe call on government to protect the country's rights in the West Philippine Sea after President Duterte fails to do so

As the Philippines celebrates the 2016 arbitral award five years after winning its historic case against China, Filipinos have taken up the mantle of defending the country’s rights in the West Philippine Sea – especially in the face of President Rodrigo Duterte’s refusal to do so.

Filipino fisherfolk, military personnel, business leaders, scientists, professors, lawyers, and civic groups have made this clear as they rallied around the landmark legal victory being commemorated on Monday, July 12.

The day before, hundreds of Filipino fisherfolk called on the Duterte government to stand for the country’s rights in the West Philippine Sea and protect the Philippines against foreign intrusions.

Hundreds of fishermen who depend on the waters to make a living told government that Chinese Coast Guard ships continue to restrict their movement in Philippine waters, including Panatag (Scarborough) Shoal and other areas of the Kalayaan Island Group (Spratlys). The fishermen said this violated the Hague ruling, which found that China encroached on rights of claimant states like the Philippines.

(China does not recognize this decision of the tribunal and the Chinese continue to violate it [Hague ruling.] What’s worse is the government of the Philippines is not asserting it to protect the country’s sovereignty.)

The government, they said, must protect the rights of Filipinos.

After the country won the landmark award in 2016, Duterte has repeatedly vowed never to give up the Philippines’ claim over the West Philippine Sea. In the years since, he has all but done this – either belittling the Hague ruling on several occasions or sticking to his defeatist stand.

Earlier in May, Duterte, fed up with criticism over his China policy, had denigrated the ruling, calling it a piece of paper he would “throw in the wastebasket.”

Public surveys, however, have consistently shown that Filipinos want the government to assert the ruling and defend the country’s territory. 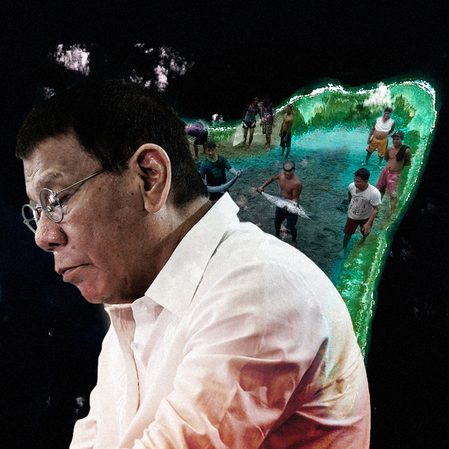 Unlike in previous years, the recent past weeks saw a chorus of groups speaking up against China’s aggressive incursions in the West Philippine Sea and Duterte’s dangerous tendency to downplay the issue.

Filipinos made their voices heard after years of rallying the government to take a clear and strong stand on the country’s dispute with China.

The statements of various groups had been prompted by the presence of hundreds of Chinese ships swarming Julian Felipe (Whitsun) Reef – a boomerang-shaped shallow coral reef located within the Philippines’ exclusive economic zone (EEZ). The Department of Foreign Affairs (DFA) filed daily diplomatic protests over the continued presence of ships in the reef just 175 nautical miles from Bataraza, Palawan.

In April, business leaders from prominent organizations issued a rare statement joining the foreign affairs and defense department’s call on China to withdraw its vessels from the area. In doing so, eight business groups raised the Hague ruling as they urged China to respect the Philippines’ sovereignty and refrain from becoming an “imperial power.”

Alumni and retired soldiers of the Philippine Military Academy voiced support for the DFA and Defense Secretary Delfin Lorenzana as they asked China to follow international law. China’s actions in the past years  demonstrated “nothing more but bad faith” in negotiations over conduct in the South China Sea, they said.

Also in April, over 200 university faculty all over the country said they were joining an “overwhelming majority” of Filipinos who have called  for “a more decisive foreign policy and national security stance to protect our territory and our people, and to regain lost ground.”

“We must surrender neither our territory nor our national self-respect by silently acquiescing to China’s unlawful actions,” the Professors for Peace group said. Calls to uphold and defend the Philippines’ rights in the West Philippine Sea came from members of some of the country’s top education institutions, including the University of the Philippines, various Ateneo campuses, and De La Salle University.

People from Duterte’s alma matter, San Beda, also told the President to retract his harmful statements and instead “categorically, demonstrably, and publicly” uphold the 1987 Philippine Constitution. Fellow alumni reminded Duterte: “The President is solemnly bound to uphold, defend, and protect his countrymen and the integrity of our national territory.”

Fellow lawyers of the Philippine leader called on all branches of the government to uphold the 2016 ruling and make clear “that such arbitral award is not a mere piece of paper fit only to be thrown in a waste basket.” The Integrated Bar of the Philippines also said the government must make clear that the country’s EEZ was solely for Filipinos’ use and any foreign possession is unlawful.

On Sunday, July 11, the opposition Liberal Party said Filipinos should remain united around the ruling. “The Hague ruling is as much a promise as it is a reminder of what good, brave, strong governance can yield,” the group said.

After years of refusing to enforce the arbitral award, the Philippines, through the DFA, committed to reject attempts to “undermine” or “erase” the landmark Hague ruling.

In a statement released ahead of July 12, Foreign Secretary Teodoro Locsin Jr. declared the award was a “milestone” as it “conclusively settled” the status of historic rights and maritime entitlements in the South China Sea, including the West Philippine Sea. 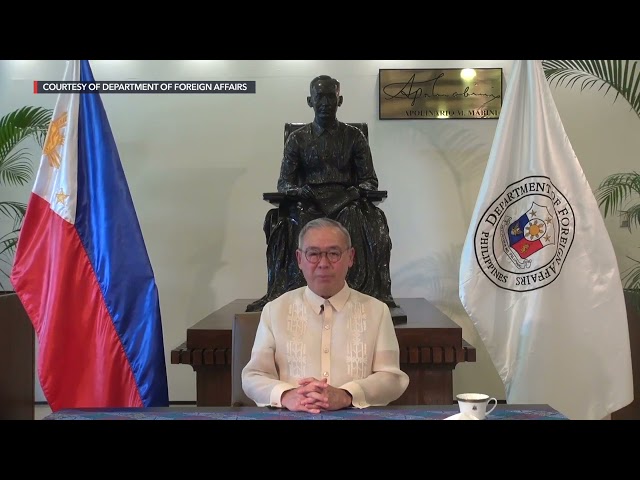 Locsin hailed the ruling as the Philippines “gift” to all countries “without exception,” and one that benefited the world beyond the South China Sea.

For the Philippines, he added, the arbitral award will serve as its “North Star.”

“For as long as nations abide by the rule of law and not of military might, the Award is the North Star that will keep us on course in the present, and that will point us back to the right direction in the future should we, in a moment of weakness or inaction, lose our way,” Locsin said. – Rappler.com

Read more on the Philippine government’s position on the ruling in past years: