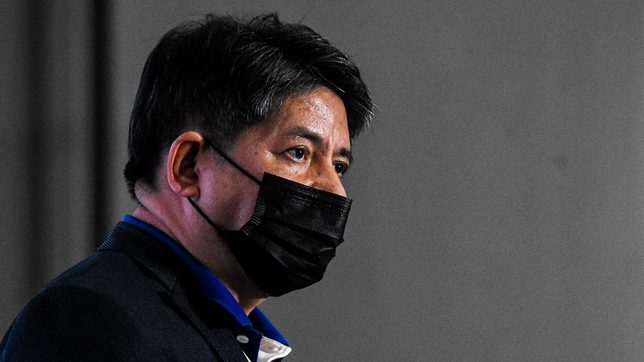 CONTROVERSIAL. Lawyer Larry Gadon of Kilusang Bagong Lipunan files his certificate of candidacy for senator in the May 2022 elections, at the Sofitel hotel in Pasay City on October 5, 2021.

Facebook Twitter Copy URL
Copied
'It was utterly despicable, and reflective of the belligerent impunity independent and courageous Filipino journalists face for doing their constitutionally protected work in the country,' says the Foreign Correspondents Association of the Philippines

MANILA, Philippines – The Foreign Correspondents Association of the Philippines (FOCAP) condemned the verbal attack of notorious lawyer Larry Gadon against journalist Raissa Robles, calling it the latest display of “belligerent impunity” members of the Philippine press faced in line with their work.

In a statement on Friday, December 17, FOCAP urged the Supreme Court and the Integrated Bar of the Philippines to discipline its “wayward member” for “his boorishness and clearly unbecoming conduct.”

It pointed out Gadon had exhibited similar behavior in the past, “that is in every sense an attack not only on Raissa and other journalists but all decent, God-fearing, and law abiding Filipinos.”

“We welcome criticism but we will never countenance such atrocious and beastly behavior,” the group said.

In an expletive-laden video, Gadon resorted to obscenities in criticizing Robles, who had tweeted about presidential aspirant Ferdinand “Bongbong” Marcos Jr.’s previously-unknown tax conviction. The issue is central in several petitions filed at the Commission on Elections seeking to cancel Marcos’ certificate of candidacy.

Gadon, who has repeatedly made himself known as a staunch supporter of the Marcos clan, had made vitriolic statements against Robles, going as far as to suggest bestiality.

“Like all Filipinos, Gadon has the right to challenge statements from journalists in the interest of public discourse, but never with such venom and malice that openly flout civility, respect, and human rights which are protected by the country’s laws,” said FOCAP which was founded during the imposition of Martial Law by Marcos’ late father, the dictator Ferdinand Marcos.

It was not the first time for Gadon to be in the spotlight for his controversial behavior.

In 2019, the Supreme Court had even suspended Gadon for violation of Rule 8.01, Canon 8 of the Code of Professional Responsibility, which prohibits lawyers from using abusive and offensive language in his professional dealings. At the time, the SC also issued Gadon with a “stern warning that a repetition of the same or similar act shall be dealt with more severely.” – Rappler.com