BLOODY SUNDAY. Manny Asuncion, Chai Lemita Evangelista and Ariel Evangelista (L-R) are three of the nine activists who died in the Bloody Sunday raids in Calabarzon on March 7, 2021.

Facebook Twitter Copy URL
Copied
(1st UPDATE) There's been 'no significant development' in the DOJ special investigation, with the furthest step taken being a crime scene ocular for only one of the nine victims

The nine activists who died on March 7 in simultaneous police raids in Calabarzon were “shot to be killed,” but the special Department of Justice (DOJ) investigation has so far only conducted one crime scene ocular for one person.

“All of them had shots in the chest, so they were really shot to be killed,” said forensic pathologist Raquel Fortun of the University of the Philippines (UP) College of Medicine during a news conference on Wednesday, July 7, exactly four months since the Bloody Sunday raids.

Families and human rights organizations preferred that Fortun and UP examine the bodies for autopsy, but the bodies got to them full of “alterations.” The entry and exit points of bullets had been sutured, with some extent of autopsies already done, and in varying state of decomposition.

While the forensics were “full of limitations,” Fortun still found indicative wounds like that of Chai Lemita Evangelista, whose fingers point to a “defense type injury.”

Police claim that all nine activists were armed and resisted the search and arrest, typical of the “nanlaban (fighting back)” narrative of cops when killing suspects during legitimate operations.

“That’s another big question to ask. Can you reconstruct what the position was of the victim? Could she have reacted to the assault, the gunshot wound, because that’s instinctive. Is this consistent with nanlaban?” Fortun said, admitting that questions like these need shooting reconstruction that go beyond examining bodies.

The Philippine National Police (PNP) manual tells cops that if faced with danger from an armed subject, they can use their gun but “only such necessary and reasonable force should be applied as would be sufficient to overcome the resistance put up by the offender.” The goal of using a firearm is to “subdue” the offender. Nowhere in any law or manual does the word “kill” appear.

“For all of them, each case deserves a homicide investigation,” said Fortun. 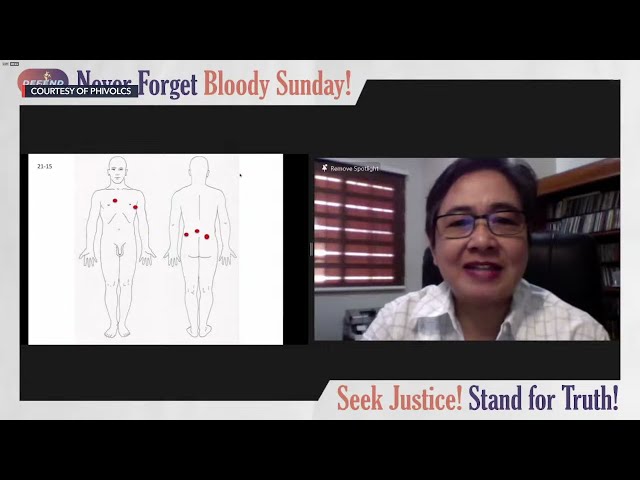 A crime scene ocular for just one

But there has been “no significant development” from the special AO 35 investigation of the Department of Justice (DOJ), said Charm Maranan of Defend Southern Tagalog.

Of the nine cases, the furthest the AO 35 panel has gone according to Maranan is to conduct a crime scene ocular inspection done on June 2 for Manny Asuncion.

Asuncion is the labor organizer who was shot inside his office in Dasmariñas, Cavite, when the search warrant and the actual search was done in his home in Rosario town, an hour away by car.

Asuncion had 6 gunshot wounds, with the three to his chest being the fatal shots, said Fortun.

“Only Manny Asuncion had this kind of ballistic investigation so far,” Maranan said in Filipino.

Maranan said the police’s non-cooperation has scuttled the investigation, even though it’s also a government panel doing the probe – which is the special AO 35 panel of the DOJ.

“Even though there’s already an AO 35 panel, their cooperation is so slow – actually not slow, none at all,” said Maranan in Filipino. Families and their paralegals were not able to immediately claim the bodies of the activists, some of them held in funeral homes where cops had supposedly left instructions. Cops deny these allegations. Still, the bodies were released to the families four days after.

The bodies have also been embalmed, and for one case, Fortun said an embalmer removed a bullet from the body which they “had no business doing.”

“In a first world setting, what happens is you freeze everything, nobody does anything. Leave it there, if he’s dead, leave him there, where the body is, what position it was, that helps a lot. Preserve the crime scene,” said Fortun in Filipino, which obviously did not happen.

“But this is the Philippines – what is happening is, the dead body is taken to a hospital, that’s crazy. Somebody has to make a decision to pronounce the body there, preserve the scene, and the investigators come in,” said Fortun in Filipino.

Fortun said a Cavite prosecutor has asked for her report on Asuncion, still part of the AO 35 mechanism. The AO 35 panel is made up of prosecutors.

But Fortun said there should be no preference, or priority, when it comes to investigating the nine deaths.

“Automatically, no matter who the victim is, that should be automatic because it’s a violent death. I really don’t know what’s happening, if that were me and the crime scene is near me, I would go there too but that’s basic,” said Fortun in Filipino.

“If a crime scene investigation was done, they should have documented it. In this case, it looks like they dragged the bodies, removed them from the scene, why would you do that? Especially if you’re a state agent, you should have known to do the right thing,” said Fortun in Filipino.

Justice Secretary Menardo Guevarra said he wants the investigation expedited, but “I was informed about the extreme difficulty of accessing the place of the incidents.”

“Be that as it may, the Calabarzon incidents remain high in the priorities of the AO 35 committee,” said Guevarra.

On the case of Chai and her husband Ariel, the Batangas police’s provincial internal affairs service (IAS) had found administrative liability on the policemen who killed the couple in operation, but there’s been no update since as to whether actual sanctions have been meted out.