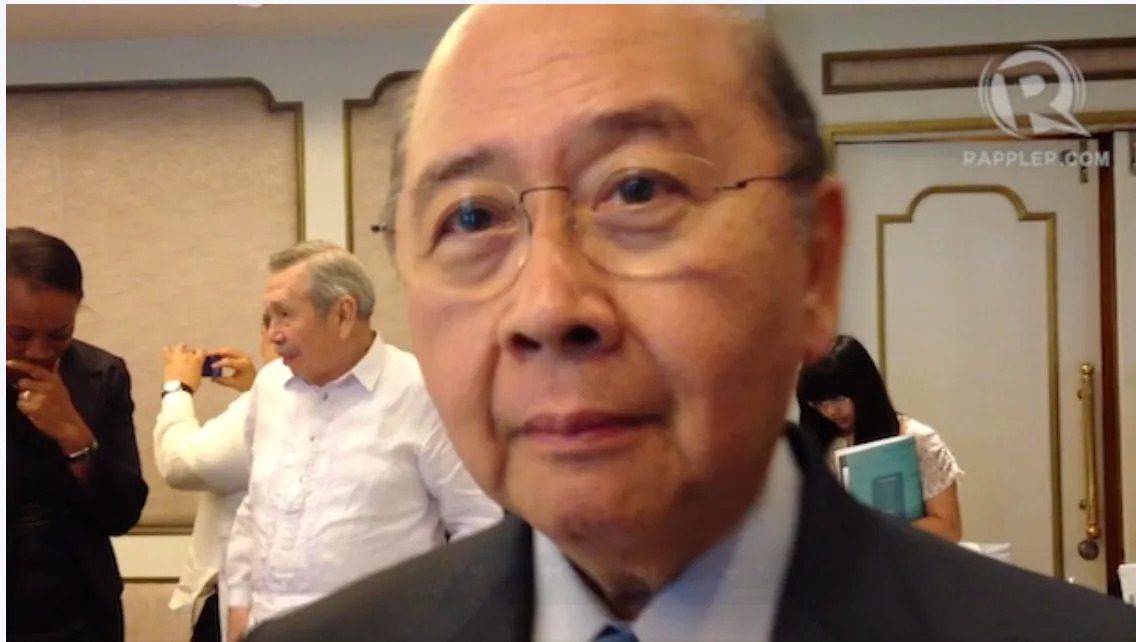 “The board of trustees of the Zuellig Family Foundation announces with deep sadness the death of its founding chairman Roberto R. Romulo last Sunday, January 23, 2022,” the group said.

Romulo, a well-known businessman before he started his career in government service, served as the Philippines’ foreign secretary under former president Fidel V. Ramos. Before his appointment as the Philippines’ top diplomat in 1992, Romulo had served as ambassador to Belgium, Luxembourg, and the Commission of the European Communities in 1989.

During his stint leading the Department of Foreign Affairs (DFA), Romulo faced the arduous task of ushering the country through one of its most notorious overseas Filipino worker death penalty cases – the execution of Flor Contemplacion in 1995 – whose death was a watershed moment for migrant worker rights in the country. Contemplacion died after Singapore refused to heed the request of the Philippines to stay the execution of the mother of four, triggering national outrage against the city-state and a temporary downgrading of bilateral ties.

Romulo resigned as foreign secretary in 1995 following the incident, telling media at the time that “the buck stops with me.”

Romulo had also been acknowledged for his efforts, as DFA secretary, to advance the Philippines’ position in the South China Sea as he opposed China’s claims in the area. Years later he spoke of the need for the Association of Southeast Asian Nations to stay in step with international law as it crafted its sea code of conduct.

Romulo also backed the Benigno Aquino III administration’s approach to file a legal case against China before the Permanent Court of Arbitration. The Philippines later won against the superpower, with the 2016 landmark Hague ruling affirming the Philippines’ rights in the West Philippine Sea.

Born in Manila on December 9, 1938, Romulo obtained a Bachelor of Arts degree from Georgetown University and a bachelor of law degree from the Ateneo de Manila College of Law.

Prior to joining government, Romulo held various positions at IBM before being appointed managing director for Thailand, Burma;  and Bangladesh, and later, president and general manager of IBM Philippines. Among several posts he held upon returning to the private sector, Romulo served as chairman of PLDT, vice chairman of San Miguel International, and chairman of Interpharma Investments Limited (Zuellig Pharma) from 1997 to 2007.

Romulo has likewise been decorated by the governments of Belgium, Thailand, Spain, Chile, France, and the Philippines.

Later in his retirement, Romulo spoke out against the Duterte administration, calling out policies characterized by “incompetence, brutality, corruption, incivility, abuse of power, and dishonesty.” Romulo shared the thoughts in an “urgent appeal” in July 2021 as the 2022 presidential race drew near.

“At the age of 82, I assure you I have no personal agenda, political or otherwise. In truth, it is my fervent prayer for the return of democracy and its institutions, which the incumbent has trampled,” he said.

Senator Grace Poe was among those who paid tribute to the late top diplomat who, she said, had “left behind a great legacy.”

“The nation lost a distinguished diplomat, eminent economist, and prolific public servant.  We will miss his profound wisdom, which he had so passionately shared to the Filipinos through his writings until his final few days,” Poe said in a statement on Tuesday, January 25.

The Joint Foreign Chambers of the Philippines (JFC) mourned the loss of Romulo, a recipient of the Arangkada Lifetime Achievement Award.

“He has championed many advocacies such as on national competitiveness, the IT-BPO sector, public health care, and disaster preparedness. For more than a decade, he has been a valuable partner and friend to the JFC as we worked with him in advocating many reforms that will help improve the business climate in the country,” the JFC said.

It is with great sadness that I learned of the passing of former foreign affairs secretary, Ambassador Roberto ‘Bobby’ Romulo…. The province mourns with you and celebrates the extraordinary life of a truly remarkable man who devoted his life to public service and the development of communities in our country and abroad,” Bichara said in a Facebook post. – Rappler.com