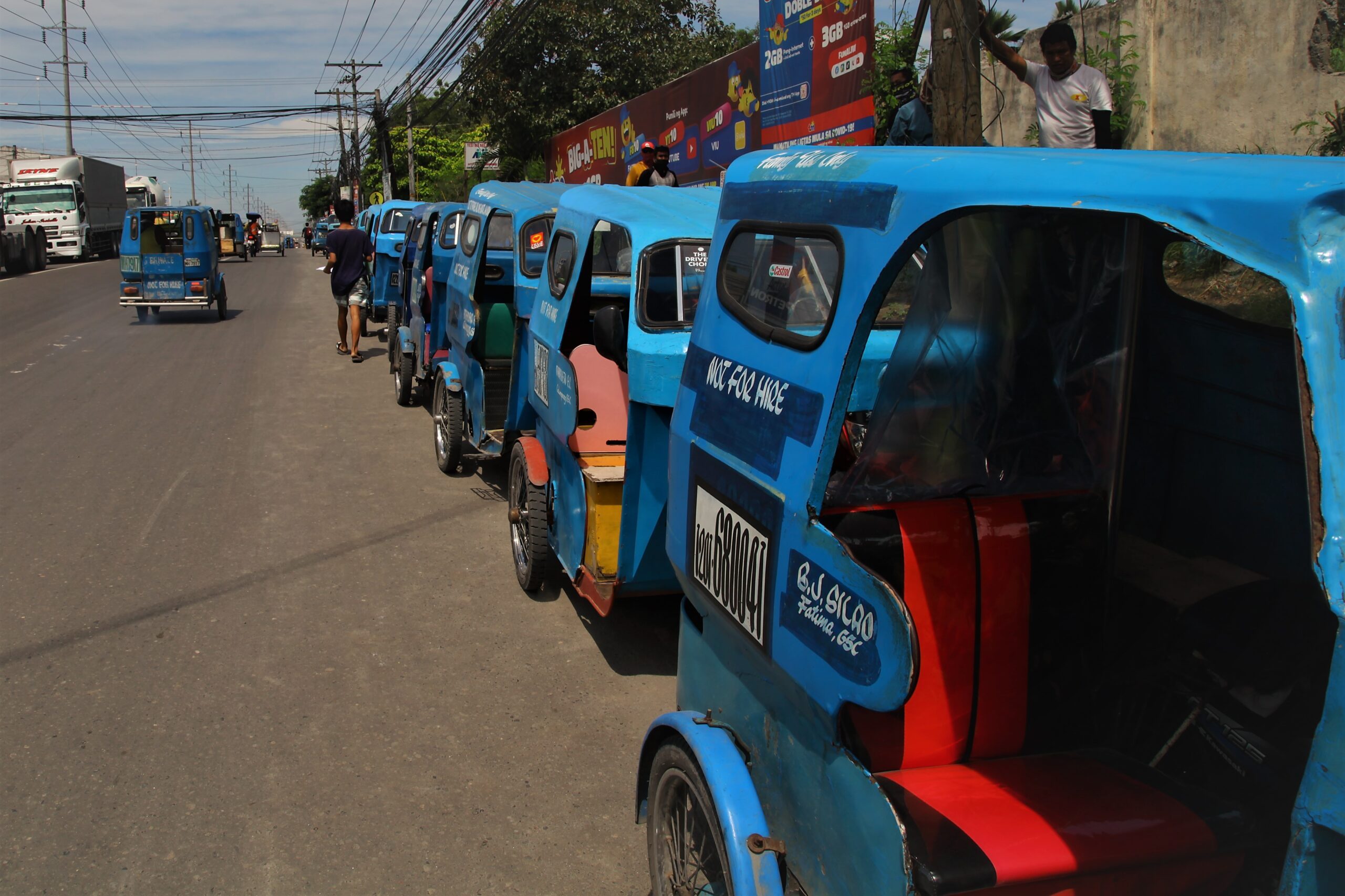 TRIKE QUEUE. Tricycles queue along the side of a highway in General Santos City.

GENERAL SANTOS CITY, Philippines – The city government’s Motorized Tricycle Franchising and Regulatory Board (MTFRB) approved an 80% increase in the minimum tricycle fare in General Santos City, a decision hailed by the drivers but frowned upon by commuters.

The MTFRB’s decision came on Tuesday, June 21, the same day fuel prices were increased again. In General Santos, the average price for regular gasoline is P81.93, P82.93 for premium gasoline, and P88.74 for diesel.

The minimum tricycle fare in the city increased from P10 to P18 per passenger for the first four kilometers and an additional P2 for every succeeding kilometer.

Tricycle drivers and owners heaved a sigh of relief as they welcomed the announcement on the increased fares.

With the steady rise in fuel prices over the past weeks, many of them gave up tricycle driving and looked for other work.

Tricycle driver Josue Fernandez said the increase was long overdue, and drivers like him had been asking the local government to grant it at a time when gasoline prices were still about P40 per liter.

“Fuel prices kept rising but the minimum fare remained at P10, making things difficult for us because we could not cope with the high costs of almost everything,” he said.

As a result, only 60 of the more than 100 members of the General Santos Tricycle Operators’ and Drivers’ Association stayed because nearly everything they earned went to fuel expenses, said Fernandez, the vice president of the organization.

Another tricycle driver, Naim Abdul, said the new rate would allow him to bring home food for his family daily.

A father of five, Abdul said, “I really don’t care if fuel prices increase as long as I can buy rice and viand for my family every day.”

Tricycles have been a popular and one of the cheapest modes of public transportation in General Santos where about 20,000 units operate. But officials said there could be more because many were unregistered with the MTFRB.

The MTFRB’s decision was greeted by commuters with raised eyebrows.

Even before the MTFRB decision, many of the tricycle fares were already overcharging commuters, they said.

“They even demanded an amount even before you can mention your destination,” said commuter Barry Ramos, adding that he doubted that drivers would follow the P18 rate set by the MTFRB.

Yen Mangompit, a local reporter, said there was a time when a tricycle driver asked her to pay P30 for a distance that should have cost her only P10.

“We understand that fuel prices have increased, but they have been overcharging commuters even before when the cost of fuel was still relatively low,” Mangompit said.

Commuter Irene Ramirez asked, “Do you think they will be satisfied with P18?” – Rappler.com