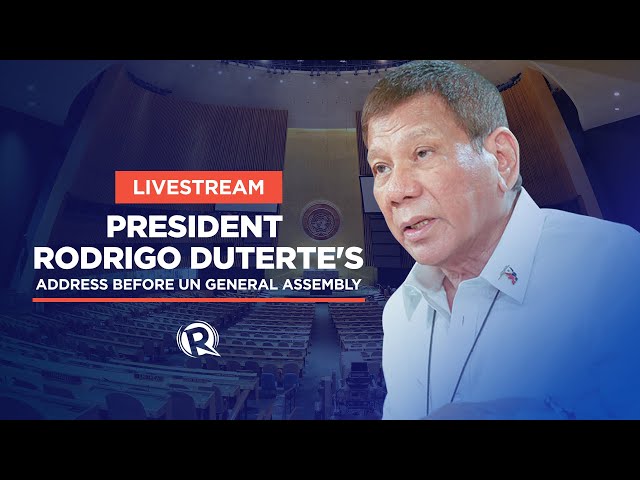 In his speech, Duterte hit the United Nations for being “inadequate” and “a product of an era long past.”

As he mentioned his government’s review of the drug war, Duterte warned against “the imposition of one’s will over another” which he said “has never worked in the past.” He urged countries to “resolve disputes peacefully,” and said “no amount of willful disregard” can diminish the importance of the 2016 Arbitral Award.

Duterte also talked about COVID-19 vaccine inequity, urged developed countries to fulfill their commitment to climate financing, and called for the abolition of the kafala system.

Below is the full text of Duterte’s pre-recorded statement at the 76th UN General Assembly.

I congratulate you on your election and welcome your “Presidency of Hope.” Indeed, that is what we need in these challenging times.

For nearly two years now, the pandemic has upended our lives. The climate crisis has worsened, inequalities have deepened, and the geopolitical balance is in a state of dangerous flux.

Certainly, these are complex problems. But one thing is clear – they all hit the poor the hardest. Injustice is the common thread that ties these issues together.

When I spoke before this august body last year, I said that how we address these issues will define our future.

From what I have seen, that future will likely be one of inequality – where the poor plays catch-up with the rich, with no hope nor chance of ever succeeding in closing the gap.

We cannot, in all conscience, allow this to happen. An unjust order is inherently volatile.

We have to reverse course.

How then do we, as governments, reconcile our obligations to our own citizens with our responsibility to the rest of humanity?

For the Philippines, we understand that we need to expand our notion of “us” beyond the nation, so we can work together to secure our common future.

We recognize that only inclusive multilateralism can deliver the global public goods we need.

And we believe that fairness, equality and respect should always be the basis of our engagement with one another.

Only with these can we correct the injustices that doom the downtrodden all over the world to a life of indignity. And for thousands during this pandemic – certain death.

Mr. President, the picture is bleak. There is a man-made drought of vaccines ravaging poor countries.

Rich countries hoard life-saving vaccines, while poor nations wait for trickles. They now talk of booster shots, while developing countries consider half-doses just to get by.

This is shocking beyond belief and must be condemned for what it is – a selfish act that can neither be justified rationally nor morally.

The plain fact is – this pandemic will not end unless the virus is defeated everywhere. Vaccines are key to achieving this.

This is why the Philippines committed One Million Dollars to the UN’s COVAX Facility. This is our modest contribution to our collective fight against COVID-19.

We strongly urge our privileged partners to fully support the COVAX Facility and further strengthen other cooperation mechanisms. We need this to save more lives, break the cycle of variants and help ensure global economic recovery.

Just as COVID-19 has had an uneven impact on peoples, climate change has also exposed the varying vulnerabilities of countries around the globe. The risks and burden of a warming climate are simply not the same for everyone.

The greatest injustice here is that those who suffer the most are those the least responsible for this existential crisis.

But here we are now at a critical tipping point, where failure to act leads to cataclysmic consequences for the whole of humankind.

The Philippines accepts its share of responsibility and will do its part to avert this collective disaster. We have submitted our first Nationally Determined Contribution, with a target to reduce greenhouse gas emissions by 75% by 2030.

I issued a moratorium on the construction of new coal power plants and a directive to explore the nuclear energy option.

But this contribution will be rendered useless if the biggest polluters – past and present – choose to do “business as usual.” We therefore appeal for urgent climate action, especially from those that can truly tip the balance.

Developed countries must fulfill their longstanding commitment to climate financing, technology transfer, and capacity-building in the developing world. This a moral obligation that cannot be avoided.

Our world’s transition to a green economy must not be at the expense of developing countries’ economic vitality. It simply cannot be – or it would be another travesty of justice.

Mr. President, the Filipino people aspire for a stable, comfortable and secure life founded on freedom, justice and equality.

We have made significant strides to this end, after more than a century of nation-building. Today, the Philippines is a middle-income economy and a thriving democracy. But difficult challenges remain – this we do not deny.

Millions of Filipinos work abroad under the most difficult and inhumane of circumstances. We call for the abolition of all structures that allow the exploitation and oppression of migrant workers.

The kafala system is one such behemoth that chains the weak, the desperate, and the voiceless to an existence of unimaginable suffering.

Nothing can justify the continued existence of this unjust system.

While reforms have been made, the kafala system must be dismantled – sooner rather than later – in the name of justice and basic decency.

The Philippines seeks stronger partnerships to protect the rights of Filipinos and realize the full potential of our nation. But let me be clear – what we mean is partnership that respects our peoples’ agency.

Let me say this again: My Government has a mandate and an obligation to my people. We will deal with all criminals – including terrorists – with the full force of our laws.

The Filipino people want to live in peace and security in their homes and communities – free from harm and danger from the lawless.

But achieving this goal has not been without challenges.

I say this in no uncertain terms: The law applies to all.

I have instructed the Department of Justice and the Philippine National Police to review the conduct of our campaign against illegal drugs. Those found to have acted beyond bounds during operations shall be made accountable before our laws.

Meaningful change, to be enduring, must come from within. The imposition of one’s will over another – no matter how noble the intent – has never worked in the past. And it never will in the future.

How many more countries shall be made to unravel and descend into chaos before the powerful heed this simple lesson?

In dealing with complex problems in nation-building, let us consider pragmatic approaches that square ideals with reality. Sure, they may lead us to imperfect solutions – but solutions, nonetheless, that actually work.

We all pay the price for the misadventures of the few that spiral into humanitarian disasters.

The Philippines, in line with its longstanding humanitarian tradition, has opened its doors to Afghan nationals, especially women and children, fleeing from conflict.

As one global community, we must do our utmost to help the Afghan people and all those who continue to suffer.

For the Rohingyas, I have instructed our Department of Justice to work closely with the UN High Commissioner on Refugees to prepare a cooperation program for a specific number of Rohingyas, consistent with our capacities.

The Philippines has limited resources during these extraordinary times. But what we can do for humanity and to uplift human dignity, we will.

Mr. President, in a period of profound geopolitical change, it is vital that all countries – big and small – commit to the rule of law. FULLY AND FIRMLY.

For a world without law is a world of disaster, where the weak is at the mercy of the strong. There can therefore be no other acceptable basis for global order but the law.

We must resolve disputes peacefully, as we manifested in the Manila Declaration on the Peaceful Settlement of International Disputes.

The Philippines is one with ASEAN and other stakeholders in ensuring that the South China Sea remains a sea of peace, security and prosperity.

The 1982 UNCLOS and the 2016 Arbitral Award on the South China Sea provide a clear path towards a just, fair, and win-win solution for all.

The Award must be seen for what it is – a benefit across the board to all who subscribe to the majesty of the law.

No amount of willful disregard by any country, however big and powerful, can diminish the Arbitral Award’s importance.

Mr. President, we face multiple crises that demand effective global governance. Yet, our institutions, including the United Nations, have proven to be inadequate.

The UN is a product of an era long past. It no longer reflects the political and economic realities of today.

Democracy and transparency are concepts that reverberate in the halls of the UN. But ironically, the Security Council – the pinnacle of the UN structure – violates every tenet of these values. It is neither democratic nor transparent in its representation and processes. Many member states have spoken firmly and we agree: This simply is not right.

If the UN is to lead the world out of the many crises we face, things need to change. The UN must empower itself, by reforming itself. Therein lies the hope for humanity.