Galvez sees possible nationwide MGCQ in May with vaccine rollout 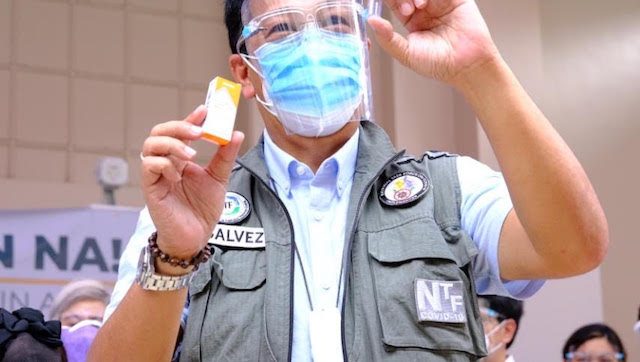 'RELIEF.' Vaccine czar Carlito Galvez Jr is about to receive his first dose of CoronaVac, Sinovac's COVID-19 vaccine, on March 1, 2021.

A nationwide loosening of restrictions and a proposal to resume face-to-face classes may be possible in May or the 2nd quarter of 2021 if the government’s vaccination program goes as planned, said vaccine czar Carlito Galvez Jr.

He made this prediction during a press conference held on Monday, March 1, the first day of the Philippines’ anti-COVID-19 vaccination drive.

“Around mid-2nd quarter. In May, once the AstraZeneca [vaccines] arrive, the ones we bought, and the Novavax, and also most likely if the promise of COVAX arrives, 6.5 million doses, this coming 2nd quarter,” said Galvez from the Philippine General Hospital.

His estimate is based on President Rodrigo Duterte’s remarks on Sunday night, February 28, that he would “open” the economy once the country has a stockpile of two million vaccine doses.

(We just need to have stock of two million, then I’ll let it go. I will open the economy. We’re really having a difficult time.)

Thought Duterte mentioned other figures, like “40 million” and “20 to 30 million” target vaccines, Galvez said the President likely just made a “mistake” and that his understanding of the President’s directive was to be able to sustain a standby allocation of two million doses at any given time in order to loosen restrictions.

“As long as we have that stockpile, 2 to 5 million [doses], we can now convince the President to open the economy and also have the face-to-face education. Because he also knows, he also realized that our country’s economy really contracted,” said Galvez in Filipino.

The Philippine government expects to receive 5.1 million vaccine doses in March, which will be reserved mostly for 1.7 million healthcare workers and critical government frontliners.

In the 2nd quarter, April to June, the government expects deliveries of COVAX Facility-obtained vaccines from AstraZeneca and Pfizer, another 1 million Sinovac vaccines, some of the 17 million AstraZeneca doses secured by the private sector and local governments, and Novavax vaccines from the Serum Institute of India.

This would create a stockpile of around “10 million” doses which would fulfill Duterte’s condition of at least two million vaccines on standby.

Duterte had thumbed down his economic team’s and pandemic task force’s proposal to put the entire country on the loosest quarantine restriction, modified general community quarantine (MGCQ), in March, siding with health experts who said it was still too risky.

With his decision, pandemic epicenter Metro Manila remains under GCQ, its quarantine classification since June, save for a two-week modified enhanced community quarantine in August.

The tough restrictions and rise in COVID-19 cases continue to hurt the economy, adding urgency to the vaccine rollout.

Duterte has said he expects normalcy in the Philippines to come in early 2023 yet. – Rappler.com