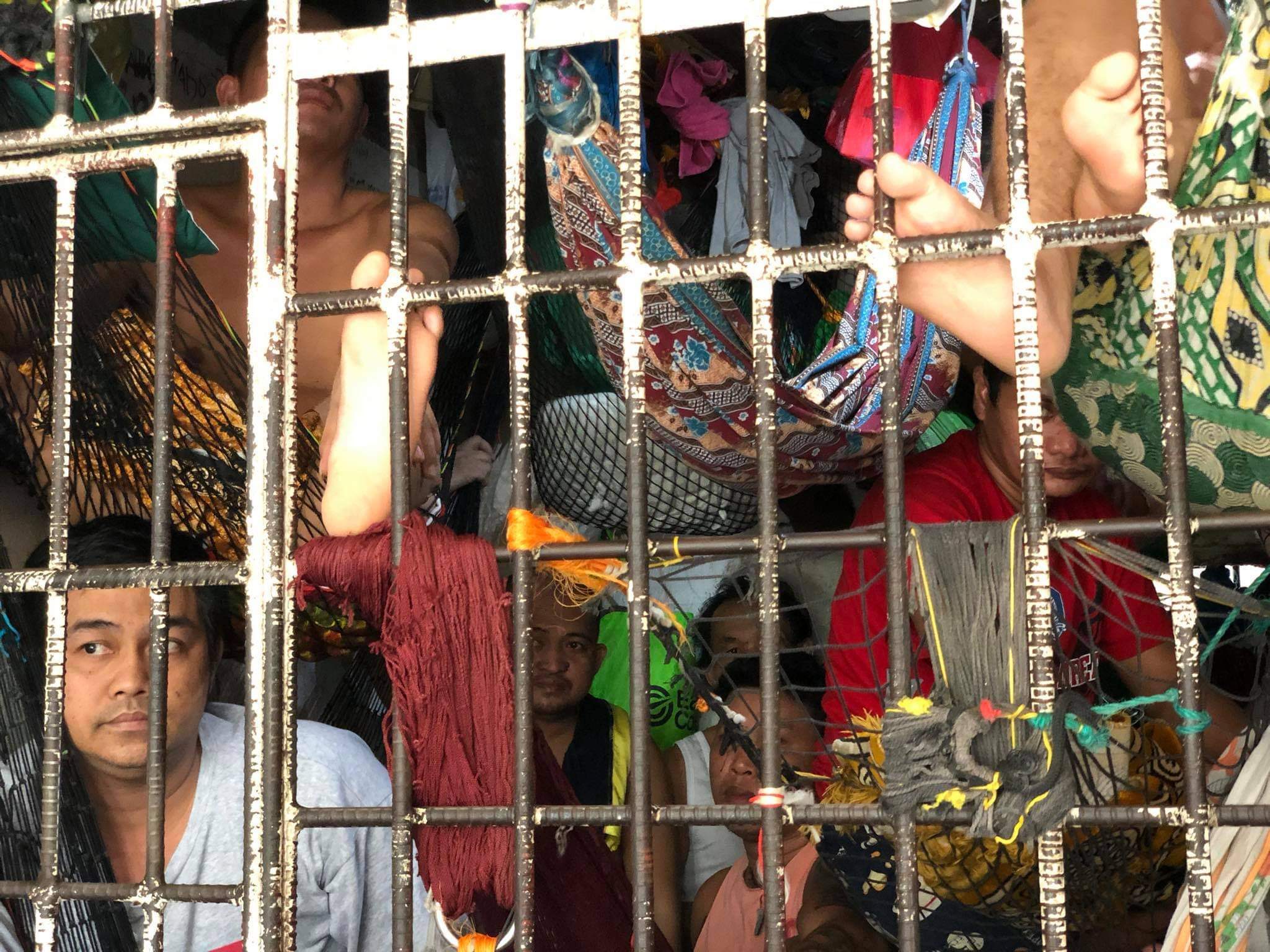 LIKE CHICKENS IN A CAGE. Detainees overcrowd a small cell at the Bula Police Station in General Santos City.

Facebook Twitter Copy URL
Copied
Due to lack of funds, General Santos police stations have no choice but to wait for the local health office to grant their test requests for detainees, who have to test negative for COVID-19 before they can be moved to the city jail

People accused of crimes have been crammed like chickens in cages in police detention cells in General Santos City because none of them could be sent to a bigger prison facility without being tested for COVID-19.

The question: Who foots the bill for the COVID-19 tests?

The detainees are not in the priority list for COVID-19 tests of the General Santos’ City Health Office, and local police officials said they had no budget for such tests.

Because of this, the detainees have to endure being packed in small cells in police stations. While officials were in a quandary, more and more crime suspects were being thrown into the already overcrowded police detention cells.

At the Bula Police Station alone, 30 people facing criminal cases have to make do with a detention cell designed for 15.

Lieutenant Clarizel Perez, spokesperson of the General Santos City Police Office (GSCPO), said on Friday, October 23, that the detainees have to test negative for the virus first before they could be handed over to the city jail, a facility run by the Bureau of Jail Management and Penology (BJMP).

The BJMP has gone strict on taking in detainees following an incident in May, when 52 inmates were infected by COVID-19 in the city jail.

Due to lack of funds, Perez said, police stations in the city were left with no choice but to wait for the local health office to grant their requests to test the detainees.

But Dr. Lalaine Calonzo, assistant department head of the City Health Office, said their priority were the direct contacts of those who tested positive for COVID-19, and travelers and workers who have returned to the city from other places.

Calonzo said the local health office, already overwhelmed by tasks because of the pandemic, can schedule tests for the inmates but the police need to submit requests first.

She said this would also depend on the supply of antigen test kits.

Calonzo said she hoped the police have included the costs of testing detainees in their proposed budget for 2022.

She said the COVID-19 tests should have been anticipated and included in the police budget this year.

“They (police) have their own health services division. They have their doctors and nurses,” Calonzo told the General Santos City-based radio station Brigada News FM.

Perez said the city police’s health services were mainly for the law enforcers and their families.

“The GSCPO has no facilities and budget for the detainees. We are dependent on the LGU (local government unit),” Perez said.

There were 15 detainees who were scheduled to be commited to the city jail but had to be brought back to a police detention cell on Friday because technical glitches delayed the release of the results of their X-ray tests.

The problem was, their antigen test results were about to lapse, said Major Ananias Vasquez, chief of the Tambler police station.

Vasquez said if further delayed, the police would need to explain to the courts why they failed to commit the detainees to the city jail despite the court orders.

The Commission on Human Rights (CHR) said overcrowding and poor healthcare services in detention centers make people behind bars among those most at risk of contracting COVID-19.

The CHR has also noted higher rates of comorbidities among inmates, especially the elderly. – Rappler.com