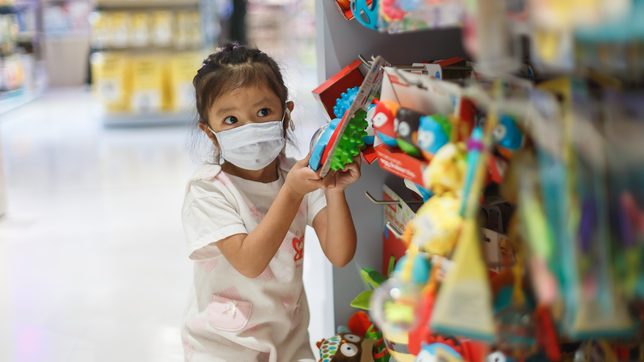 KIDS AT PLAY. File photo shows a child with a face mask checking out toys in a store.

Facebook Twitter Copy URL
Copied
'If parents want to bring them out, then go to open spaces like beaches and plazas where the risks of infection are lesser,' says the head of a doctors' association in the city

Organized physicians in General Santos City on Thursday, November 25, warned against the government’s move to ease pandemic restrictions on children, saying minors now being allowed in malls and other establishments in the city were being exposed to great risks of contracting COVID-19.

The local chapter of the Philippine Medical Association (PMA) said it has noted new cases of COVID-19 infections involving children.

“We have seen children getting infected with COVID-19. While there are only a few, we would like to put a stop to this before the problem becomes bigger,” said Butch Peñamante, PMA General Santos president.

“The immune systems of young children are not yet fully developed. If parents want to bring them out, then go to open spaces like beaches and plazas where the risks of infection are lesser. Don’t bring them to malls and other enclosed places,” he said.

Peñamante said the age group not included in the government’s vaccination rollout should be considered high-risk, and “unless they get vaccinated, they shouldn’t be allowed in malls.”

He called on the city government to reconsider, and keep children out of harm’s way by barring them from malls and other indoor establishments.

Residents with their children in tow have been flocking to the malls after commercial establishments in General Santos City opened their doors to children after the city government lifted quarantine restrictions on November 12. 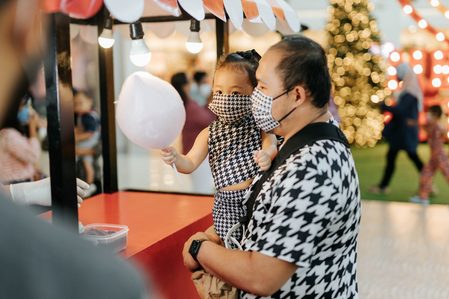 Amusement places for children, however, have not been allowed to operate in the city.

The lifting of restrictions came after this city was deemed low-risk for COVID-19 due to a substantial decrease in daily new cases since October.

General Santos remains under the less strict general community quarantine (GCQ) until the end of November.

Mayor Ronnel Rivera said local officials and the local COVID-19 task force will discuss the concerns raised by the city’s physicians in the hope of coming up with clearer guidelines. – Rappler.com