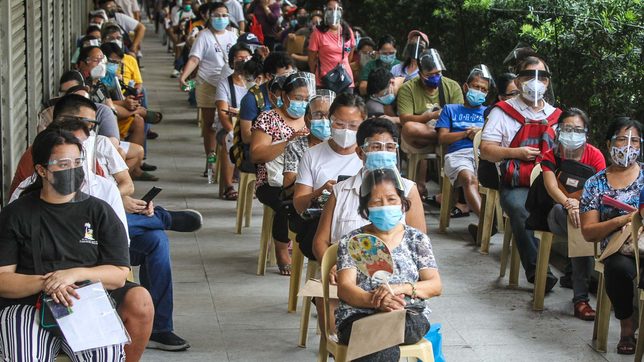 IN LINE FOR VACCINE. Individuals under the A1, A2, and A3 priority wait in line for the start of the Pfizer COVID-19 vaccine rollout by the local government at a hotel in Manila on May 18, 2021.

The government aims to begin vaccinating economic frontliners and indigent Filipinos, A4 and A5 on the vaccine priority list, after the month of May.

“I want to announce to the public the approval of my recommendation to start vaccinating our countrymen in A4 and A5 category after the month of May or when we have a steady supply,” said vaccine czar Carlito Galvez Jr. on Tuesday, May 18, during a Malacañang news briefing.

According to Galvez, there are some 12.8 million people who qualify as economic frontliners. Meanwhile, there are 16 million people classified as the country’s indigent population, which comprises the A5 category.

No COVAX Facility Pfizer vaccines for A4

Indigent Filipinos will be able to receive vaccines obtained by the government through the COVAX Facility of the World Health Organization because of the initiative’s requirement that vaccines go to vulnerable sectors.

Economic frontliners, however, will only get vaccines purchased by the government, said Galvez.

This means that, for now, economic frontliners can’t receive Pfizer-BioNTech vaccines since the country has so far not signed any supply agreement with Pfizer. All Pfizer vaccines the country currently has and expects to receive in the coming months come from the COVAX Facility.

So far, the vaccines procured by the national government are Sinovac vaccines and Sputnik V vaccines from Russia. It is about to pay for Moderna vaccines. Some local governments, meanwhile, have purchased AstraZeneca doses.

The Philippines earlier secured 40 million doses of Pfizer’s vaccine, though no definite date of delivery has been announced. The signing of the term sheet with Pfizer is the last to be inked with seven vaccine developers comprising the Philippine government’s vaccine portfolio.

Registration through company or government

The national government’s vaccine cluster is set to release guidelines on A4 and A5 vaccinations in the coming days.

However, Galvez said that vaccinations of economic frontliners will be coordinated by both local governments and companies who were able to secure their own vaccines.

For instance, the 1.3 million AstraZeneca vaccines purchased by private sector corporations are set to arrive in June.

Economic frontliners whose companies didn’t buy vaccines can register for their jabs either at the local government unit where they live or where their establishment of employment is located, said Galvez.

Simultaneous vaccinations of A4 and A5 is critical to the government’s goal of achieving herd immunity by November in Metro Manila, Bulacan, Cavite, Rizal, Laguna, Pampanga, Batangas, Metro Cebu, and Metro Davao – an area Galvez referred to as “NCR Plus 8.”

Testing czar Vince Dizon, in the same press conference, said these areas are the government’s focus because they are all reporting high infection rates and are economically critical to the country.

To achieve the government’s goal, Galvez estimates that the country needs 15 million vaccine doses a month and must inject 500,000 shots a day nationwide. Metro Manila would need 3.3 million doses coming in monthly, while the focus provinces beyond would need 250,000 to 450,000 doses a month. – Rappler.com