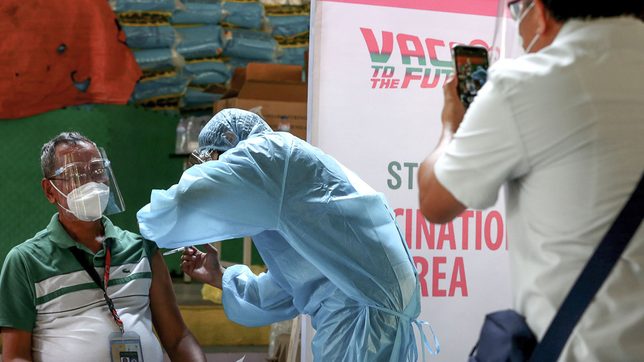 VACCINATED. A senior citizen is vaccinated at the Timoteo Paez Elementary School on April 5, 2021.

Governors and mayors in low-risk areas in relation to COVID-19 transmissions will ask President Rodrigo Duterte that they be given top vaccine priority too.

Marinduque Governor Presbitero Velasco Jr, president of the League of Provinces of the Philippines (LPP) said in an interview with Rappler on Tuesday, April 6, that he will make the request through a letter to Duterte.

“We will write again a letter to President Duterte to include all governors and city and municipal mayors in group A1, not only [those] in high-risk and critical areas,” Velasco said.

Velasco noted that all top local officials, regardless of the level of COVID-19 risk in their jurisdictions, face constant risk of contracting the dread virus.

“These local chief executives often visit provincial or municipal hospitals…. They always supervise the health workers in health facilities, so they should all be included [in the top priority group] for their protection,” Velasco said.

Velasco added that based on LPP’s tally, around 10 governors have tested positive for COVID-19 since the pandemic began in early 2020.

Velasco made the statement after pointing out that the national government allowed only governors and mayors in high-risk areas to be vaccinated against COVID-19 under the A1.5 sub-priority group, which includes Barangay Health Emergency Response Teams (BHERTS), contact tracers, and social workers.

All local officials were originally under the B3 category or other essential categories, before they were moved up in the priority list in late March.

In March, numerous local officials drew public outrage after disregarding the vaccine priority list and getting inoculated against COVID-19. Duterte had called out 9 mayors because of this, in a televised address on March 25.

Speaking to ANC on Monday, Interior Undersecretary Epimaco Densing III said that the number of mayors who cut the vaccination line has risen to 13, along with a governor and a councilor. – Rappler.com