Where will rest of P389M go? Group calls for transparency in Manila Bay white sand project 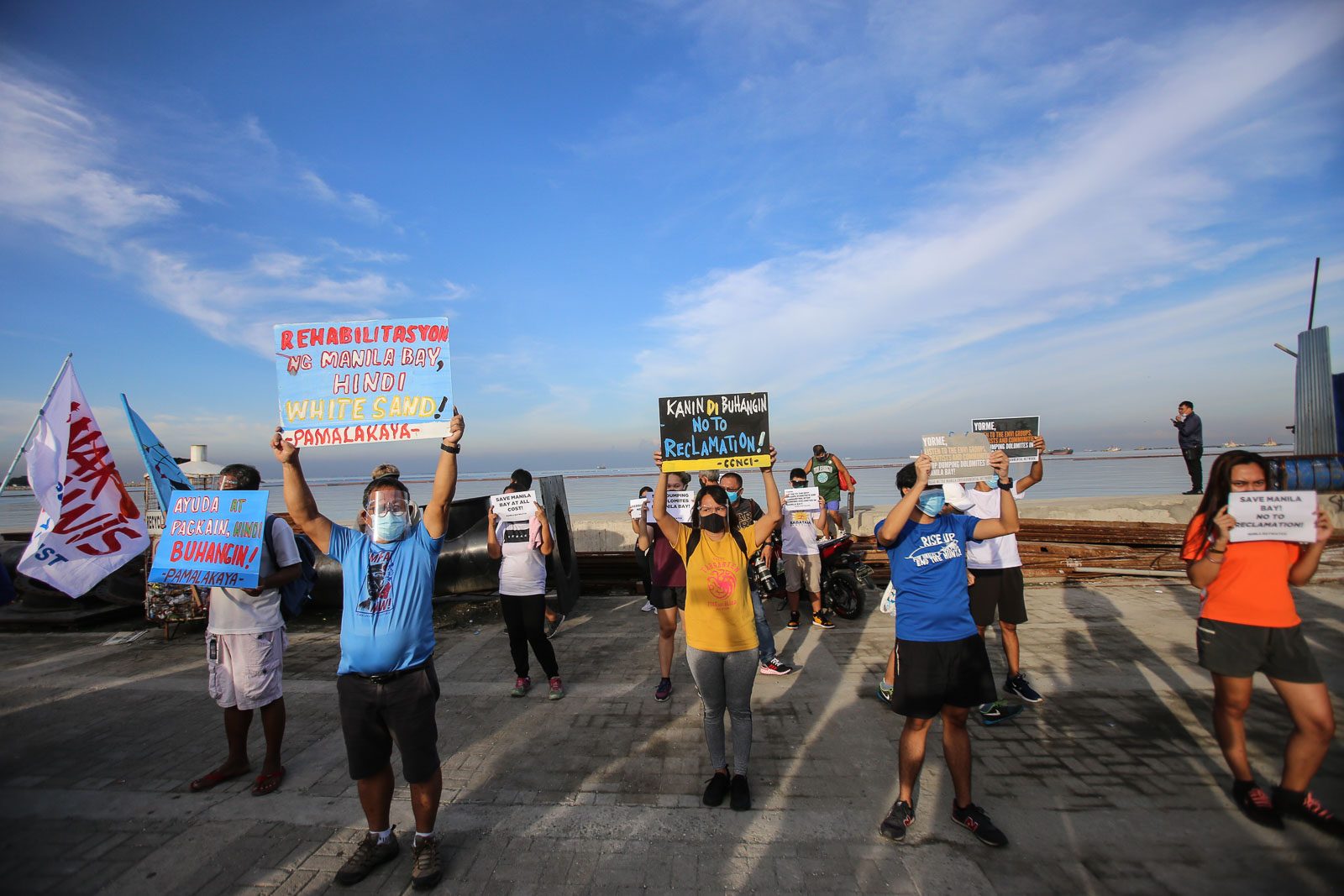 Activists and environmental groups hold a jogging protest against the Dolomite dumping project along Roxas Boulevard in Manila on Friday morning, September 11, 2020. The groups call for a genuine rehabilitation of Manila Bay that aims to restore its abundant marine and fishery resources, instead of “aesthetic surgery” of the DENR.

Facebook Twitter Copy URL
Copied
'It doesn't make them any favors when they say that the dolomite sand is just P28 million. Because the next question is, saan mapupunta 'yung balance?' asks Infrawatch PH's Terry Ridon

In a webinar hosted by Oceana Philippines, Living Laudato Si, and the Archdiocese of Manila Ministry on Ecology, Infrawatch PH Convenor Terry Ridon raised the question on the project’s budget.

Running their computations with an estimated P1,000 per cubic meter of sand and P500 for labor, the group concluded that filling the 500 meters by 60 meters of Manila Baywalk with 164,700 cubic meters of sand will run short of the P389-million budget.

Ridon inquired, “Hindi ho ‘yan aabot ng P389 million. (The expenses will not reach P389 million) Which is why we are asking, where is the remainder of the project price going to go?”

“During DENR’s (Department of Environment and Natural Resources) budget hearing, DENR Undersecretary Jonas Leones said that desilting is included in the P389-million project, in which P28 million constituted the cost of dolomite,” the group said in a press release on Wednesday, September 16.

The group added: “However, a perusal of the project’s DPWH (Department of Public Works and Highways) supplemental bulletin shows no line item relating to desilting activities, but mostly the filling of sand along the Manila Bay boardwalk. How can this not be perjury?” (READ: Artificial beach in Manila Bay not in NEDA’s master plan, DENR admits)

The DENR has yet to publicly release the contract of the project, as well as supplemental documents pertaining to the project’s environmental viability.

Several groups have cried foul over the beach nourishment project’s seeming primacy on aesthetics, saying the budget for the project could’ve been used instead to help sectors hit by the the ongoing coronavirus pandemic. (READ: DepEd would have used P389-M Manila Bay project fund to buy gadgets – Briones)

In an online discussion on Wednesday, Fernando Siringan of the National Academy of Science and Technology said the government must establish engineering interventions to prevent loss of sand on the baywalk.

Siringan also said that “maintenance is a must” for beach nourishment, especially in an area like the Manila Bay that is vulnerable to flooding and storm surges during typhoons.

DENR Undersecretary Benny Antiporda had earlier said the department is preparing engineering interventions to keep the sand on the baywalk, but did not specify what interventions they are planning to do.

Aside from budgetary concerns, the DENR has yet to release the project’s certificate of non-coverage, as it continues to claim it is exempted from getting an environmental compliance certificate (ECC).

Environmental advocates and critics, including scientists and experts in the field, have raised the alarm over the unsustainability of the white sand project.

In response to critics, the DENR in a statement on Tuesday, September 15, called out “blind critics propagating lies and baseless accusations.”

The DENR also reiterated in its statement that the beach nourishment project is in line with the Supreme Court’s 2008 mandamus directing government agencies to clean up, rehabilitate, and preserve the Manila Bay.

“The DENR takes exception to what appears to be a deliberate attempt to mislead the public and vilify government efforts to give Manila Bay’s shore the much-needed makeover, away from its old image of having massive piles of garbage,” the department said. – Rappler.com