END RED-TAGGING. Activists from different progressive groups gathered in front of the Commission on Human Office in Quezon City on Tuesday, December 7, to call on the end of the anti-terror law.

MANILA, Philippines – Human rights and advocacy groups on Thursday, December 9, expressed dismay over the retention of “repressive provisions” of the anti-terror law as the Supreme Court (SC) mostly upheld the heavily-contested law.

Rights group Karapatan said the massive opposition against the anti-terror law shows that it remains to be a “dangerous piece of legislation which directly harms our basic rights and freedoms.”

“The Supreme Court’s decision to adopt repressive provisions… will only set to worsen the already dismal human rights situation in the country,” Karapatan secretary-general Cristina Palabay said in a statement.

“We continue to assert that this draconian law must be junked and declared unconstitutional,” she added.

The Supreme Court voided a phrase under Section 4 of the anti-terror law that would’ve made dissent or protest a crime if it had an intent to cause harm, saying it is “unconstitutional for being overbroad and violative of freedom of expression.”

It also struck down the anti-terror council’s power to designate a person or a group as terrorists based on another country’s request.

Still, the High Court mostly upheld the highly-contested anti-terror law, increasing fears that it could be used to further stifle dissent in the country already seeing the effects of rapid deterioration of civic space, among others. For one, the decision also upheld the crime of inciting to terrorism, which many fear could be used against activists and journalists.

Kalikasan – People’s Network for the Environment, meanwhile, welcomed the striking down of the “killer caveat” but said that “at the end of the day, the decision is complicit with the ATL’s (anti-terror law’s) fascist architects.”

“These are bittersweet affirmations that our defense of the environment and our rights are just, but that we still face systemic challenges of authoritarianism and impunity,” the group said. “The upholding of the [law] is the biggest manifestation of this.” 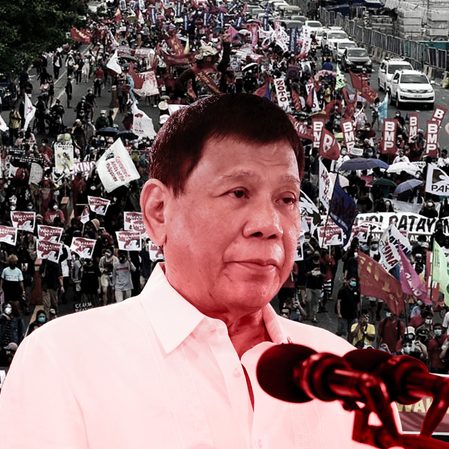 In Defense of Human Rights and Dignity (iDefend) said the provisions upheld has “deadly consequences” on everyone, adding that the law now “serves as the grim reaper of freedom of expression and association” in the country.

“iDefend strongly condemns the Court’s ruling which cements Duterte’s authoritarian rule, legitimizes atrocities against human rights defenders, and facilitates the wholesale abrogation of fundamental civil and political rights in the guise of counter-terrorism,” the group added.

Fisherfolks’ rights group PAMALAKAYA said that the law “still has so many fangs and claws” that the government can use against its citizens.

“Voiding the so-called ‘killer’ provision of the anti-terror law is no consolation to Filipinos because the entire law is a killer law. It should have been struck down totally and in its entirety,” the group said.

Prisoners’ rights group Kapatid, meanwhile, said the decision is “self-contradictory” and will likely see a rise in political prisoners.

“[The SC] better be prepared for the carnage it will legalize as its decision can provide virtual license for the National Task Force to End Local Communist Armed Conflict to stage larger and bloodier punitive actions to crush targeted Left organizations and individuals before Duterte’s term ends,” Kapatid spokesperson Fides Lim said in a statement.

Purple Action for Indigenous Women’s Rights (LILAK) fears the consequences of the SC decision, adding that “the mere existence of the terror law spells more thorns in the lives and struggles of indigenous women and their communities.”

Gurung and Ramos were the first individuals charged under the anti-terror law, but were later were freed in July 2021 with the local court ruling they were a case of mistaken identity.

Both local and international organizations have consistently opposed the Philippines’ anti-terror law, which President Rodrigo Duterte and his allies in Congress rushed to pass during the height of the pandemic in 2020. (READ: ‘Stealth declaration of martial law’: Rights groups slam Duterte, anti-terror law)

In June 2020, the Commission on Human Rights (CHR) said the then-proposed legislation was “highly intrusive,” while United Nations rights chief Michelle Bachelet raised concerns about “about the blurring of important distinctions between criticism, criminality and terrorism.”

The fears are not unfounded, as the numbers of activists and community organizers arrested, threatened, or killed continue to climb during the last year of the Duterte administration.

As of August 2021, Karapatan has documented at least 421 killed while 1,138 have been arrested and detained. – Rappler.com