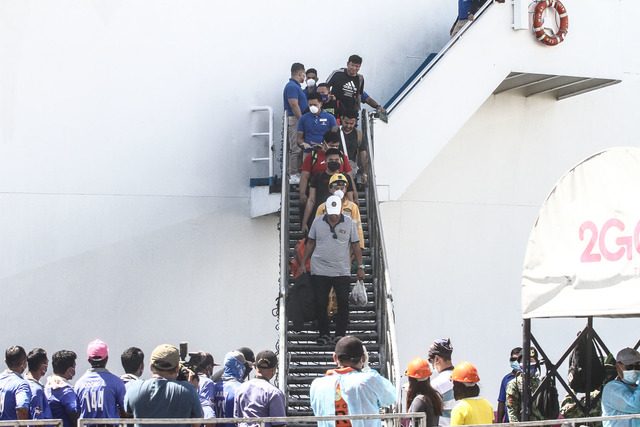 The last sea vessel passenger trip from Manila arrives at the Cebu Port as Health Workers check on the temperatures of the almost 300 passengers disembarked disembarking on March 14, 2020. Photo by Gelo Litonjua/Rappler

Residents of Eastern Visayas who have been stranded in bigger cities like Cebu or in Metro Manila will not be allowed to go home again until after September 11.

Many of the other cases are close contacts of returning residents.

The Department of the Interior and Local Government-Central Visayas (DILG-7) advised stranded persons from Eastern Visayas who are in Cebu to contact their respective local government units first before heading to the local ports, so that they would not get stranded at the terminals.

This is the second time the repatriation program to the Eastern Visayas – called “Hatid Tulong” by the national government – was suspended.

The first time was on June 25, to allow the region to decongest its isolation centers and to “require”  real-time reverse transcription polymerase chain reaction (RT-PCR) swab tests. The national government later shifted to the local government units the responsibility of requiring swab tests. (READ: Return of locally-stranded individuals suspended to require PCR testing)

While repatriation to all provinces was suspended that time, a separate memo had been issued for the Eastern Visayas because mayors petitioned the national government to halt the transportation of returning residents because their isolation facilities were already at full capacity.

Previously, the region was able to keep community transmissions under control by quickly isolating and testing returning residents.

In fact, before Hatid Tulong was allowed to resume, Eastern Visayas reported a recovery rate of 95% of its cases on July 21, with only 33 active cases.

The program, previously called “Hatid Probinsya,” was created to bring residents stranded in the cities back to their home provinces. It was implemented simultaneously with the now-suspended “Balik Probinsya” program of Senator Bong Go.

Go’s program provided beneficiaries with livelihood and housing assistance, in addition to transportation.

This created a challenge for local governments who lacked resources to deal with the volume of returning residents who were being shuttled to their hometowns.

Local chief executives, whose healthcare and isolation facilities have limited capacity, heavily criticized the national government’s lack of coordination in implementing both programs.

As of Friday, the Philippines recorded 209,544 cases of coronavirus disease – the highest in Southeast Asia, with 3,325 deaths and 134,474 recoveries.

The Octa Research Group predicts that COVID-19 cases could reach 375,000 by September 30. – Rappler.com