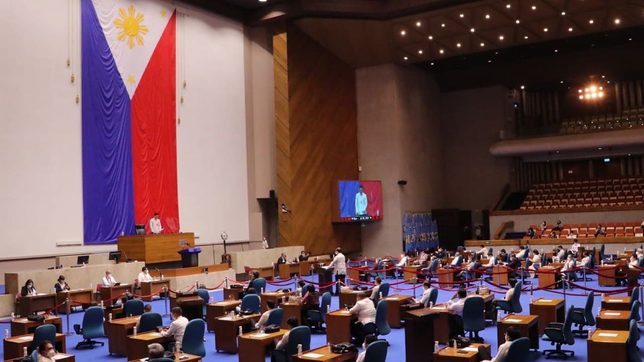 LEGISLATION. The House of Representatives in session.

The House of Representatives on Tuesday, August 3, approved on third and final reading bills that seek to give 25-year franchises for water concessionaires Manila Water and Maynilad.

With 206 affirmatives, the House voted to pass House Bills No. 9422 and 9423. Seven lawmakers voted against, saying that the bills’ passage at the lower chamber was “rushed.”

The bills also allow the concessionaires to continuously establish, operate, and maintain waterworks in Metro Manila and surrounding provinces.

The bills were passed after the concessionaires signed respective deals with the government that categorized them as public utilities, explaining the need for a congressional franchise.

Opposition lawmakers questioned the swift passage of the bills in comparison to how the House scrutinized and eventually thumbed down the renewal of the franchise of ABS-CBN, the country’s largest broadcaster.

(It seemed like Congress became a rubberstamp because of the swift passage of the new franchises for Maynilad and Manila Water without even go through thorough deliberation.)

Compared to the 13 hourslong hearings that it spent scrutinizing ABS-CBN’s franchise bill, the House committee on legislative franchises approved the franchise bills for the water concessionaires after just one committee hearing.

Opposition lawmakers argued that Congress needs to comb through the concession deals that the concessionaires signed with the government in 2021.

The concession deals have not been released to the public, with most of the publicly-released information coming from Justice Secretary Menardo Guevarra. – Rappler.com