‘Too wicked to be ignored’: House leaders threaten to defund NTF-ELCAC 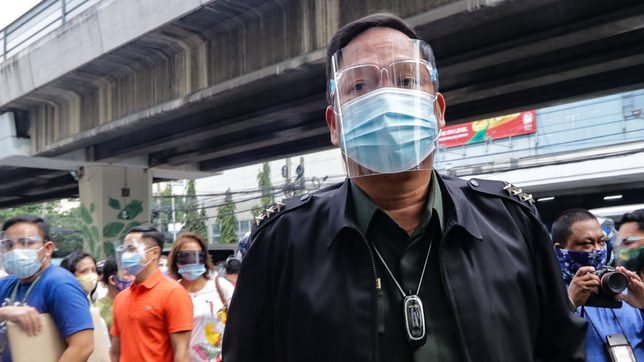 IN HOT WATER. Lieutenant General Antonio Parlade Jr is the spokesperson of the NTF-ELCAC.

Ranking members of the House of Representatives on Friday, April 23, threatened to defund the National Task Force to End Local Communist Armed Conflict (NTF-ELCAC) after it red-tagged community pantry organizers and volunteers.

Abante, 6th District of Manila congressman, filed a resolution on Friday calling for P16 billion of the NTF-ELCAC’s barangay development program funds to be reallocated to the Department of Social Welfare and Development and the Department of Labor and Employment.

“Given the gravity of the problems brought about by the COVID-19 pandemic, and in light of the inability of NTF-ELCAC to properly perform its functions, the government should prioritize efforts to provide financial assistance and other forms of support to our countrymen who have no sources of income or have limited means as a result of the pandemic,” Abante said in his resolution.

Romero condemned the NTF-ELCAC’s red-tagging spree and said it should be probed through a committee hearing before the end of April.

“The rampant unlawful profiling and obvious red-tagging of organizers of community pantries by officials of the NTF-ELCAC are simply too wicked to be ignored by the members of this august chamber,” said Romero, who represents 1-Pacman and leads the powerful party-list bloc in the House.

He added, “Should NTF-ELCAC  fail to substantiate their claims  and justify use of funds, Congress may realign its budget to more urgent needs.”

An audit on the agency

“The random suspicion of communist threats without sufficient basis is evidence of poor utilization of available funds,” said Tulfo, vice chair of the House committees on overseas affairs and on sustainable development goals.

Tulfo suggested that NTF-ELCAC funds be audited through an executive session as the task force can invoke the confidentiality of intelligence funds against a public hearing.

Uy called for the Commission on Audit and the National Privacy Commission to step in. She said the audits of these agencies can complement a House probe into the task force.

“We are, in effect, reminding the NTF-ELCAC that they are accountable to Congress, that Congress will not tolerate abuses, violations of law, and all other conduct unbecoming of public servants and agencies of government,” said Uy, who vice chair of the House appropriations committee.

There have been calls in the House to defund the NTF-ELCAC before but not from the House’s powerful members after the task force red-tagged the the popular community pantries, which have been hailed across the country as a manifestation of the Filipino core value of “bayanihan.”

Before the community pantries, the NTF-ELCAC red-tagged lawmakers, lawyers, students, teachers, journalists, and activists with little to no basis – just as it has done in the case of community pantry organizers.

In all these instances, Makabayan bloc lawmakers have been consistent in condemning the NTF-ELCAC and calling for its defunding.

“It is clear that money is wasted on NTF-ELCAC. The NTF-ELCAC ‘general’s pork’ should be spent as aid like the P10,000 cash aid per family,” said Kabataan Representative Sarah Elago, who herself has been red-tagged multiple times by the agency. – Rappler.com