MODULES. A teachers sorts out the self-learning modules distributed to students of the city of Manila as part of DepEd's Learning Continuity Plan.

Lawmakers backed the creation of a center dedicated to assuring the quality of materials produced by the Department of Education (DepEd), after glaring errors and even foul language were found in learning modules across the country.

The House Committee on Basic Education and Culture on Wednesday, June 16, adopted the proposal of Albay 2nd District Represenative Joey Salceda to create a Learning Materials Development Center (LMDC) attached to the University of the Philippines (UP) College of Education to ensure the accuracy, quality, and effectiveness of learning materials in the public school system.

“The problem with materials produced by DepEd is really quality assurance. I have not seen a textbook produced by the DepEd that compares with the quality of learning materials typical in more sophisticated public school systems. Instead, what we see are materials that jump too high, steep too low, or are just plain inaccurate or objectionable,” Salceda said.

Salceda, who chairs the House Ways and Means Committee, added that an independent center that would “act as a sort of content and quality ombudsman for our learning materials” is needed.

“If you spread inaccuracies with one textbook, it spreads all over the country. And because we keep these books for a while, you could be misinforming or miseducating a generation with a bad textbook,” Salceda said.

The LMDC will be the “clearinghouse” for nationally-procured and distributed learning materials. According to the proposal, the center will be led by an executive director to be appointed by the dean of the UP College of Education.

Education Undersecretary Tonisito Umali, who was present in the hearing, said that DepEd would certainly welcome any idea that aims to improve the quality of education in the country.

“The idea of partnering, we definitely welcome this. Anything to ensure error-free textbooks,” he said.

This development comes after a learning module featuring a sex-crazed aswang horrified lawmakers on Monday, June 14, as they investigated errors in student readings worth billions of pesos in taxpayers’ money. This was not the first time that DepEd committed a blunder in its learning materials.

Since classes started on October 5, 2020, errors in learning modules have continued to surface on social media, with netizens calling out DepEd for the mistakes. 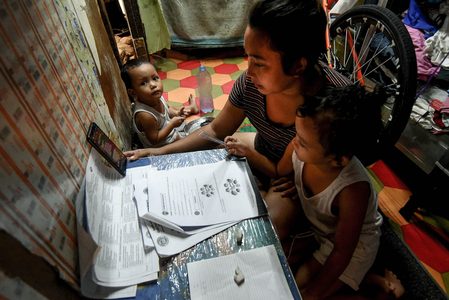 Even before the pandemic, erroneous textbooks for public schools have been a problem. In 2019, the Commission on Audit (COA) flagged the DepEd, asking it to correct the errors in P254 million ($5.3-million) worth of textbooks being used in public schools.

Distance learning, however, was widely criticized, as the Philippines appeared unprepared for it. – Rappler.com