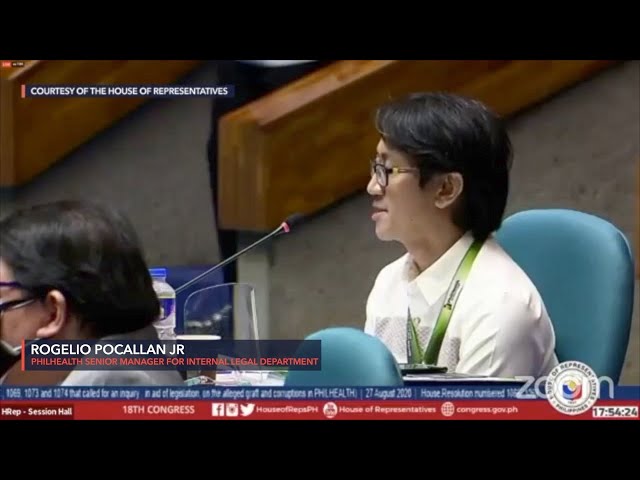 Lawyer Rogelio Pocallan Jr, Internal Legal Department senior manager at the Philippine Health Insurance Corporation (PhilHealth), will be detained for 4 days in the House after he was cited in contempt.

Pocallan earned the ire of lawmakers during a hearing on Thursday, August 27, after he admitted that it was he who rendered the legal opinion used by the PhilHealth board of directors to overturn a 2015 Court of Appeals (CA) ruling to suspend the erring Perpetual Succour Hospital Inc in Cebu City for 3 months.

But Pocallan is of the opinion that PhilHealth is allowed to reverse the CA decision because it has quasi-judicial powers.

(PhilHealth won the case. The Court of Appeals backed you up. It upheld your decision. It was right to suspend Perpetual Succour for 3 months. Then you’re going to make a policy to change the 3-month suspension?)

Minutes later, Barzaga asked Pocallan if he still stands by the same opinion he penned 5 years ago.

“Yes sir, because the quasi-judicial power is vested in the PhilHealth board,” Pocallan said.

This made Barzaga, a lawyer and certified public accountant, fume even more.

“Kung ako ang tatanungin mo, clear sa Constitution (If you are going to ask me, it’s clear in the Constitution): judicial power will be vested on the Supreme Court of the Philippines,” Barzaga said.

(That’s why I’m asking you this: As a lawyer, right now, are you telling us congressmen that we should know that a decision of the Supreme Court, a decision of the Court of Appeals, even if it’s final and executory, PhilHealth can change it?)

Pocallan still stood by his answer, prompting Barzaga to move to cite him in contempt.

“Balik na naman tayo sa quasi-judicial eh. Naglolokohan na lang tayo rito! (We keep on going back to your quasi-judicial answer. You’re just making a fool of us here!) I’m sorry, I move that he be cited in contempt!” Barzaga said.

When House committee on public accounts chair Mike Defensor asked Barzaga what should be the punishment for Pocallan, the Cavite congressman said it should be detention in the House.

Defensor then moved to detain Pocallan at the Batasang Pambansa until Monday, August 31.

The motions were unanimously adopted by the House committees on public accounts, and good government and public accountability, which are investigating the latest corruption scandal to rock PhilHealth.

The hearing was then temporarily suspended to allow the House Sergeant-at-Arms to escort Pocallan out of the plenary hall and into his detention room somewhere inside the Batasang Pambansa.

The other PhilHealth officials present could only watch Pocallan in silence as he fixed his documents on his table before he was taken to his detention room.

What happened in the Perpetual Succour case?

In 2015, PhilHealth’s Prosecution Department found that Perpetual Succour was guilty of overextending the confinement period of patients, the Inquirer reported.

The department then ruled to suspend Perpetual Succour for 3 months and imposed a fine worth P10,000.

The hospital brought the case before the CA, which thumbed down its petition and upheld the PhilHealth department’s suspension order.

Despite the court victory, the PhilHealth board would later issue a resolution reversing the Prosecution Department’s suspension of Perpetual Succour. The board instead ordered the hospital to just pay a P100,000 fine.

This was later the subject of an Ombudsman case that lawyer Harry Roque – now President Rodrigo Duterte’s spokesperson – filed against 11 former and incumbent PhilHealth executives in 2019.