House to resume hearings on Mamasapano in April 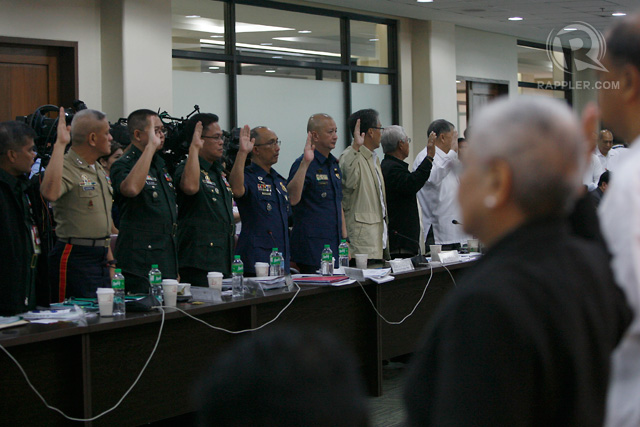 CONTINUATION. Resource persons attend the hearing of the congress inquiry in the Mamasapano, Maguindanao encounter at the House of Representatives in Quezon City on Wednesday.

MANILA, Philippines – Following a clamor from its congressmen, leaders of the House of Representatives on Wednesday, March 18, arrived at a consensus to resume hearings on the Mamasapano clash on April 7 to 8.

The development came after a petition – signed by more than 90 House members – was submitted to Speaker Feliciano Belmonte Jr to appeal for the continuation of hearings on the tragic event before discussions on the proposed Bangsamoro Basic Law (BBL) is resumed.

The House postponed its probe into the Mamasapano bloodbath after holding just one hearing.

Cagayan de Oro Representative Rufus Rodriguez, chair of the ad hoc committee on the Bangsamoro, said House leaders also agreed to put the proposed BBL to a vote in the committee on May 11 to 12, when lawmakers report back for work after the summer break.

A total of 52 out of the 75 members of the ad hoc committee submitted a petition asking Rodriguez to move BBL discussions after the Mamasapano hearings are concluded.

"The Speaker was sensitive to all the requests. It was a happy compromise for all that we were able to schedule all these during the recess," Rodriguez said.