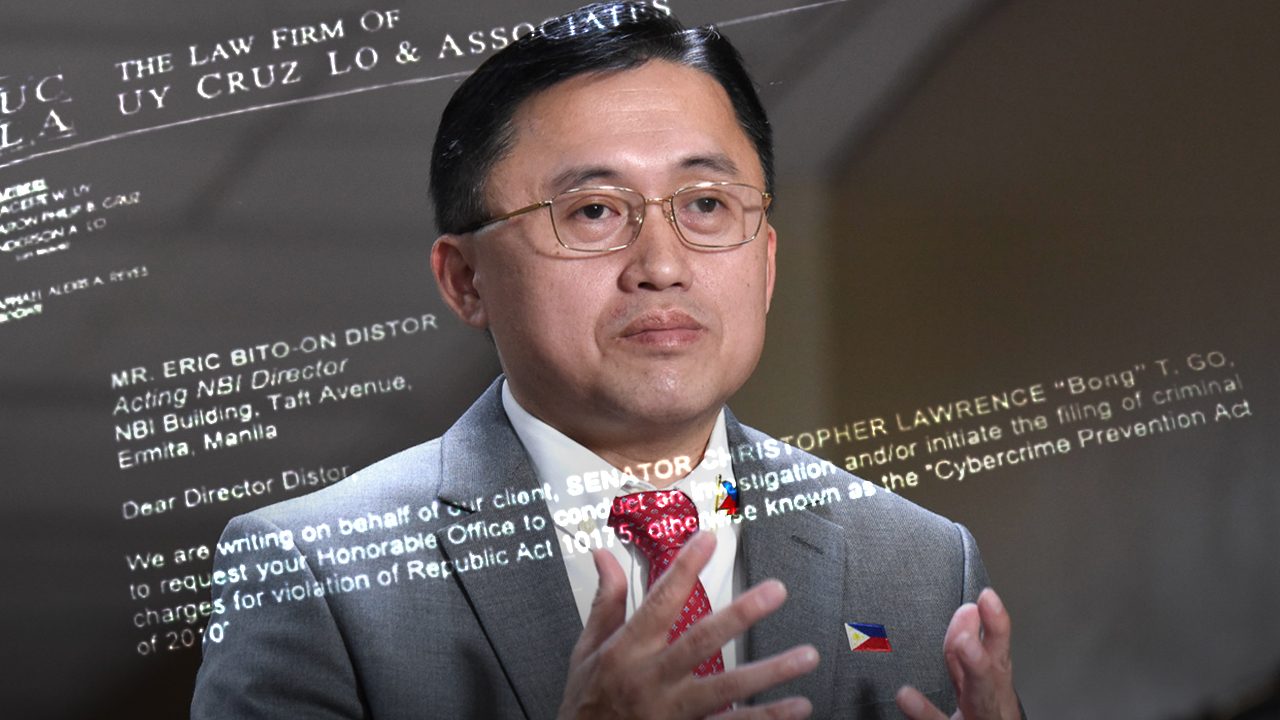 Facebook Twitter Copy URL
Copied
The subpoenaed people are not informed the complainant is Senator Bong Go. They are also not informed which of their social media posts is the subject of the subpoena. They call it harassment.

On the letters of a law firm representing Senator Bong Go, the National Bureau of Investigation (NBI) sent subpoenas to as many as 6 people all over the country over social media posts critical of the powerful former presidential aide.

“We are writing on behalf of our client, Senator Christopher Lawrence “Bong” Go, to request your honorable office to conduct an investigation and/or initiate the filing of criminal charges for violation of Republic Act 10175, otherwise known as the Cybercrime Prevention Act of 2010,” said the letter.

Rappler purposely left out the details of the post being complained about to protect the subject of the letter.

“The public post is malicious and callously designed to malign and cast dishonor against Senator Go’s person to his damage and prejudice. Hence it, constitutes a violation of the law. We are hoping for your immediate and prompt action on the matter,” said the letter.

By May, NBI Manila sent a subpoena to the person “commanding” their appearance the next month. The subpoena does not name Go as the complainant, but refers only to “the complaint filed by Uy Cruz Lo Associates Law Firm.”

The subpoena also does not mention, or even gave an idea of what the subject post was about.

“Acknowledging the current situation, we are urging you to communicate with us thru our phone number or email listed below,” said the subpoena.

The person told Rappler they made numerous attempts to get in touch with the NBI through official phone numbers, and other mobile numbers acquired elsewhere, but they failed to reach the office and the emails went unanswered.

Rappler obtained a letter from NBI Cybercrime Chief Vic Lorenzo writing the local NBI of the person in July, requesting another subpoena which would require the person to appear at the local office.

Only days later, the subpoena from the local NBI was sent, which the person heeded.

The person told Rappler the process had been “physically tiring, mentally and emotionally draining.”

Rappler has spoken to two people subpoenaed by the NBI because of Go’s request, and a lawyer who said he assisted two more people with similar subpoenas. The 5th person is the student whose lawyer appeared at the NBI on Thursday, July 16.

A Rappler source said they’ve spoken to a 6th person outside Luzon who received a similar subpoena.

Another individual was subpoenaed mid-June with details only referring to the Uy Cruz Lo Associates and with no mention of the post in question, just that it’s a complaint “for alleged libel.”

Upon hearing on Thursday of Go’s admission that he indeed sent letters to the NBI, the individual scoured through their posts and found that they shared posts critical of Go.

“The post was not libelous. I just shared it. I was not the original poster,” the individual told Rappler.

The Supreme Court has already struck as unconstitutional the part of the cybercrime law which punished aiding and abetting of a cybercrime – in this context, the sharing of a supposedly libelous post.

The person said they emailed NBI their response mid-June, explaining that it would be difficult to go to the NBI headquarters on Taft Avenue in Manila given the limits to movement in quarantine. The person also asked for additional details, but they never heard back from the NBI up to now.

“At least I know lawyers, but how about the ordinary citizens/netizens who have no resources? This is harassment,” the person told Rappler.

NBI Cybercrime Chief Lorenzo has not responded to Rappler’s texts and calls asking why the agency sent subpoenas which lacked details.

In an earlier statement, Go said people should be “responsible” about what information they post or share.

(If you know that it’s false and you just want to damage a person’s reputation by spreading fake news, you should be held accountable for if you’re proven to have violated a law. The court, anyway, will be the one to say whether your accusation against me is a violation of the Cybercrime Law, laws on libel or other laws.)

The NBI earlier subpoenaed an individual who ranted on Facebook about the administration’s spending, criticizing how the government did not initially have funds for health workers when it was earlier able to buy a P2 billion jet.

The person subpoenaed in June also found out that in April, the Philippine National Police (PNP) ordered a “complete background investigation” on them.

The PNP memorandum, a copy of which was seen by Rappler, ordered cops of the intelligence section to “determine (the person’s) morality, integrity, loyalty, discretion, character and reputation and involvement to illegal drugs/activities, affiliation with any threat groups, derogatory information and for criminal records.”

The person has since deactivated the original Facebook page. “The intention is just to silence dissenters and critics,” the person said.

The anti-terror law, which makes dissent a terror act if found with an intent to cause harm or risk, took effect Saturday, July 18. – Rappler.com