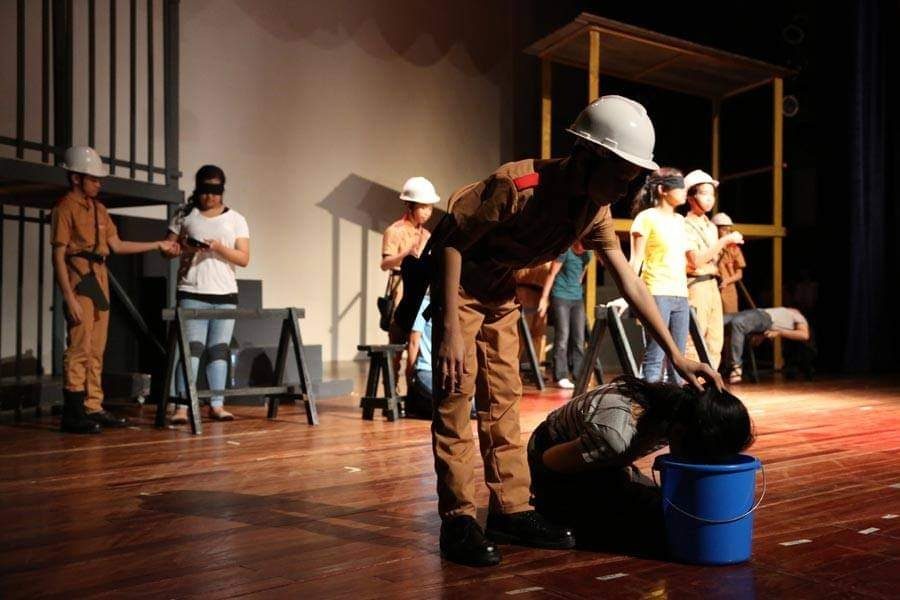 Facebook Twitter Copy URL
Copied
'How can we raise the future leaders of this country to love their country... if they have a false sense of Philippine history? We will keep electing the wrong people,' says the Raya School director Ani Almario

(There were these big fish fighting small fish, and what the small fish did was band together to overthrow the big fish.)

This was how Ani Almario, director of the Raya School, first described to her pre-school students what had happened during the EDSA Revolution on February 25, 1986.

“In this way, tinuro na namin ang mga (we already taught them the) value of coming together and overthrowing somebody who is preventing us from becoming free,” Almario told Rappler in an interview on Monday, February 22.

The Raya School is a progressive, Philippine school with a K-12 program, whose thrust is to instill a “sense of country” in its students.

“We really want [our students] to be patriotic. In order to be patriotic, you’d have to have pride [in being] a Filipino, and you need to know about the country’s history, culture, and values,” she said.

“How can we raise the future leaders of this country to love their country and work towards nation-building if they have a false sense of Philippine history? We will keep repeating the same mistakes. We will keep electing the wrong people,” she added.

Before the pandemic, Raya would hold simulations of the martial law period among its roughly 500 students to help commemorate the EDSA Revolution.

(For example, in our cafeteria, some students are only allowed to buy one item, but then there’s another student population that can buy anything they want, because they’re the cronies.)

Cronies refer to the associates of former dictator Ferdinand Marcos, who benefited from their friendship with him – whether in terms of legal assistance, political favors, or facilitation of business monopolies – during his administration. (READ: Search for Marcos’ wealth: Compromising with cronies)

Another simulation involves prohibiting students from talking to their classmates for a certain period, demonstrating to them how freedom of expression was curtailed during martial law.

Press freedom was one of Marcos’ main victims when he placed the country under military rule in September 1972. Fearing the power of the media, he made sure that his government had full control over all news agencies. (READ: Marcos’ Martial Law orders)

Recognizing the sensitivity of the issue, Almario said that every simulation they did was well thought-out and carefully planned, and that debriefing sessions always followed.

Despite the pandemic, the Raya School made sure it would still be able to commemorate the EDSA Revolution through meaningful activities.

Almario said that they coordinated with their students’ parents to facilitate the martial law simulations in their respective homes. (READ: FAST FACTS: DepEd’s distance learning)

“We’d ask parents what their children’s favorite activities were, and then we’d ask them to ban these activities for a week,” she shared.

(When you’re a kid, doesn’t it feel like your rights are being trampled on when you’re told you can’t play?)

The parents also had to make sure that their children reflected on their experience.

Aside from this, students are also asked to listen to podcasts and watch films about freedoms and the legacy of the EDSA Revolution.

“We’re also planning to do a panel [featuring] people who know martial law, and who know our country’s fight for freedom, so that the kids could listen to the speakers and ask questions,” Almario went on.

The limits of textbook learning

For Almario, teaching martial law through textbooks is not enough, and can even be problematic.

“Some of the textbooks are really revisionist, so you won’t see anything about the regime of Ferdinand Marcos. I’ve seen a textbook that just says he was in power for 20 years and declared martial law,” she said, noting the absence of information on how Filipinos suffered during that time.

“So those students who read that book do not have any idea what kind of human rights abuses were committed that time,” Almario explained.

In January 2020, defeated vice presidential candidate Ferdinand Marcos Jr – the only son and namesake of the late dictator – said that history books should be revised because they supposedly contain “lies” about how his father ruled.

In a television interview in September 2020, on the 48th anniversary of the declaration of military rule, Education Undersecretary Diosdado San Antonio said that human rights abuses under the Marcos regime are being taught under the K-12 program.

San Antonio explained that concepts and issues related to martial law are part of the “most-essential learning competencies” for Grade 6 Araling Panlipunan.

Meanwhile, Almario said that teachers should still hold lessons on this dark chapter of Philippine history despite the challenges of remote learning.

“It’s extra challenging to be a teacher right now,” she admitted. “We also need to educate ourselves about what’s going in our country and in the world to find out the truth, so we can be better teachers to our students,” she said.

“Kailangan mulat ka rin (You need to be aware as well),” she added. – Rappler.com