Facebook Twitter Copy URL
Copied
The case of the 7 unionists arrested on Human Rights day give a springboard to again question before the SC the search warrant template in arresting activists, and the Marcos-time doctrine that restrict their access to extraordinary writs 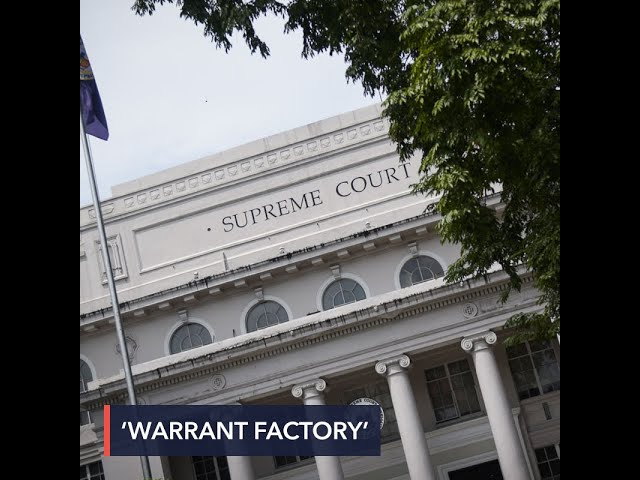 The progressive National Union of Peoples’ Lawyers (NUPL) filed on Friday, December 19, petitions for the writs of habeas corpus on behalf of Dennise Velasco and Joel Demate, 2 of the 7 unionists arrested on Human Rights Day on December 10.

The writ of habeas corpus, if granted, would compel the government to “produce the body” of the activists; in this context, to release them from detention.

The NUPL used the cases of Velasco and Demate to once again frame their arguments in such a way that they asked the Supreme Court to look at two things – were the search warrants used against the activists constitutional, and was it time to revisit the Marcos-time Ilagan doctrine that restricted the activists’ access to the relief of the writ of habeas corpus?

“This will hopefully give ample protection to the citizenry, particularly to their constitutional right against unreasonable searches and seizure which have been occurring for the longest time but with more intensity and impunity lately,” said the NUPL in Velasco’s petition.

The search warrants came from one judge – Quezon City Regional Trial Court (RTC) executive judge Cecilyn Burgos-Villavert, according to the Public Interest Law Center (PILC). Villavert also issued the search warrants that resulted in the arrests of 58 activists in Manila and Bacolod in November 2019.

Velasco and Demate’s petitions allege that the search was conducted using what they called a police template of raiding the homes first, asking the occupants to go out. The arresting team then spends minutes to hours inside the house of the suspect, before implementing the actual search warrant where there were now witnesses such as barangay officials.

The searches yielded illegal guns and grenades, and enabled the police to arrest them without warrant on the principle of caught in the act. Illegal possession of firearms and explosives is a non-bailable offense.

“The alleged seized items were obviously planted by the police…The police had ample opportunity to place the said objects inside the house, considering that (Demate) and his daughter Cielo were immediately removed therefrom and held against their will,” the NUPL said in Demate’s petition.

In both petitions, the NUPL told the Supreme Court that they could not access the records for the application of the search.

Listing the legitimate activities of Velasco and Demate, the NUPL said the police’s witness in applying for the search warrant “was either lying or describing a person other than Dennise (or Joel).”

“There are strong indices that the issuance of the search warrant was tainted with infirmities and should be carefully examined by this Honorable Court,” the NUPL said.

In 2019, Chief Justice Diosdado Peralta defended Villavert and said there was no basis to investigate the judge.

Peralta had been highlighting a reform policy of investigating incidents involving judges, even without a complaint, if the action appears irregular on its face.

In a statement, the Philippine Bar Association (PBA) expressed its concern on the so-called “warrant factory” involving Villavert.

PBA called on judges to be more “circumspect and prudent,” and said it was confident that “the Supreme Court will remain vigilant and continue to safeguard our peoples’ Constitutional rights.”

In 1985 during the Marcos regime, the Supreme Court denied the petitions for the writ of habeas corpus for detained lawyers Laurente Ilagan, Antonio Arellano, and Marcos Risonar Jr.

The Supreme Court said the petition was moot because the lawyers had already been charged of the non-bailable rebellion, meaning there was already a legal basis to keep them in jail. That came to be known as the Ilagan doctrine, and has worked against activists since then.

The NUPL acknowledged that Velasco and Demate may soon be charged and the Ilagan doctrine would kick in, but they urged the Supreme Court to still investigate the alleged illegality of the search and the arrest.

“Mootness should not be a default ground for the refusal of the courts to exercise its power of judicial review in cases where it involves serious violation of these constitutional rights,” the NUPL said.

The NUPL said that “violators of human rights..routinely invoke the presumption of regularity in the performance of official duties and rely on the Ilagan doctrine to shield their acts from judicial scrutiny. “

“Such arbitrary practices and performances should not be regularized,” said the NUPL. (READ: In battle for civil liberties, Supreme Court is needed now more than ever)

During budget deliberations this year, the Supreme Court committed to look into the rules of the writs and to see if these need to be strengthened.

But in an earlier interview, Peralta seemed more inclined toward judicial restraint, a principle wherein courts wait for complaints rather than act on its own and become so-called judicial activists. – Rappler.com