Incumbent 1st district Rep. Rolando Uy comforts the wife of his slain son, Roland Sherwin, during the burial at the Oro Garden Memorial Park Saturday, Nov. 20, 2021. Roland Sherwin was the eldest son of Uy who is running for Mayor in Cagayan de Oro. Photo by Froilan Gallardo

Facebook Twitter Copy URL
Copied
Roland Sherwin, a councilor of Barangay Carmen, and his caretaker Samuel Pabalan were gunned down by two still unidentified men at a family-owned quarry in Barangay Pagatpat on November 9

Hundreds came for the burial of the murdered son of Cagayan de Oro mayoral candidate and 1st District Representative Rolando Uy at the Oro Gardens Memorial Park in the city on Saturday morning, November 2.

“We love you, anak (son). Goodbye,” the grieving Uy said at the end of his eulogy for his eldest son Roland Sherwin.

The 67-year-old congressman spoke about how the murder of his eldest son, fondly called as Tawee, and his caretaker Samuel Pabalan, have shaken their family.

“Tawee was not a perfect human being but he was a good son, and he was a good brother,” said Uy who broke down several times as he read from a three-page statement.

“We cannot accept that he was brutally slain,” Uy said.

The 45-year-old Roland Sherwin, a councilor of Barangay Carmen, and Pabalan were gunned down by two still unidentified men at a family-owned quarry in Barangay Pagatpat on November 9.

Police have not discounted the possibility that the killings were politically motivated given that the elder Uy is seen as the frontrunner in the 2022 mayoral race in the city.

Pabalan was buried on Wednesday in another private cemetery.

“We cannot see any reason why my son was mercilessly killed,” Uy said.

He said they trust that the Philippine National Police would identify, arrest, and bring the killers to justice.

His other son, Vice Mayor Reineir Joaquin Uy, said his family and their friends were offering a P14-million bounty for the arrest of the killers.

Cagayan de Oro police spokesperson Major Evan Viñas said investigators have only come up with sketches of the two gunmen after a new witness came forward.

Viñas said the witness, a worker in Barangay Pagatpat, told police he saw the suspects come in a grey Nissan Almera car.

He said a CCTV camera from a nearby establishment was also able to record the men in the car.

“We suspect that the car brought the gunmen to Barangay Pagatpat. Then they transferred to a waiting motorcycle,” Viñas said.

The killings shocked residents who feared that it was the beginning of a new era of electoral violence in the city.

“I hope this would not become a habit in the city,” Cabanlas said.

For his part, Councilor Ian Mark Nacaya said he hopes the police will not arrest “fall guys.” 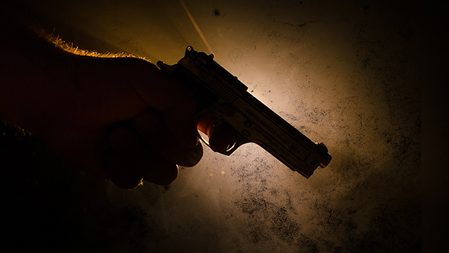 – with reports from Bobby Lagsa/Rappler.com