Ex-INC minister Menorca arrested on the way to court

MANILA, Philippines – Former Iglesia ni Cristo (INC) minister Lowell Menorca was arrested by plainclothes policemen in Manila on his way to  the Court of Appeals on Wednesday, January 20.

Menorca, who was with wife Seiko, was on his way to court to testify on petitions for writs of habeas corpus and amparo filed by his relatives before the High Court in October 2015.

Interviewed by Ted Failon on radio dzMM, Menorca said he did not even receive any notice of his impending arrest, which stemmed from a libel case filed in Kapatagan, Lanao del Norte.

"Itong mga bagay na ito, hindi ako kayang kumbinsihin na walang kinalaman ang Iglesia ni Cristo (I cannot be convinced that the Iglesia ni Cristo has nothing to do with this)," said Menorca, who was allegedly detained by the INC last year to force him to expose members critical of the chuurch.

There was a nearly two-hour standoff at the corner of Roxas Boulevard and Quirino Avenue in Manila after two plainclothes policemen – one of them in short pants – attempted to serve the arrest warrant on Menorca.

His wife, Jinky, told Failon that the policemen, who did not even show them their badges to prove their identity, "grabbed" Menorca as soon as he got out of their vehicle to move to another vehicle. One of them even reportedly tore his shirt in the process.

Jinky, who documented the incident, said the police "flashed" an arrest warrant to them but did not let them read it in full.

In the video taken by Jinky, the policemen refused to show their badge to the couple despite their repeated demand, and just said Menorca was under arrest. 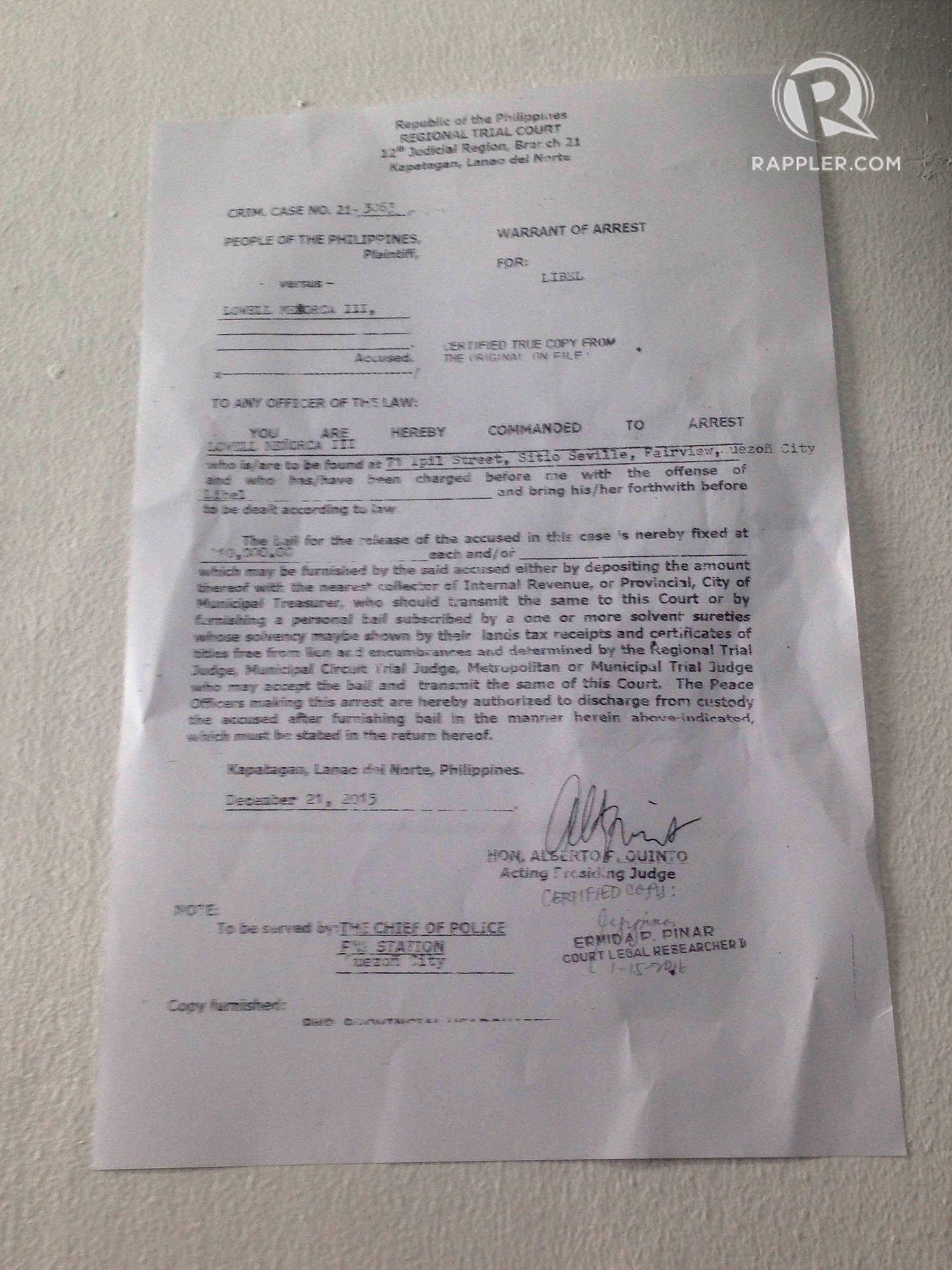 WARRANT OF ARREST. The warrant of arrest, dated December 21, 2015, issued by the Regional Trial Court in Kapatagan, Lanao del Norte.

In the radio interview, Menorca reminded police authorities he had a traumatic experience with their colleagues in the past – he had narrated he was detained by policemen in Sorsogon who filed trumped-up charges of illegal possession of explosives, which were eventually dismissed. (READ: INC Minister Lowell Menorca: The story of my kidnapping)

At the time of the interview, the number of policemen surrounding Menorca had swelled to 20, led by Superintendent Ed Leonardo, chief of Manila Police District Station 10.

(I will follow the law, though I know that they [INC leadership] use the law to harass people like me. I won't fight. I'm already surrounded. My wife just wants to keep me safe.)

Isaias Samson, another former INC minister facing libel charges, earlier said that according to information that he had gathered, other libel cases have been filed against Menorca in different parts of the country, such as Isabela and Cavite, besides Marawi City. (READ: INC minister Isaias Samson: Life in danger)

Menorca said he did not know about these cases because "I have never received any notice."

Menorca requested, through the radio interview, that he be brought to the police station by Manila Police District Chief Senior Superintendent Rolando Nana himself. He didn't want to be handled by policemen who are members or affiliated by the INC.

Nana later heeded the request and escorted Menorca to Station 5, where he was booked and was expected to post bail.

INC spokesman Edwil Zabala said in the same interview that the INC had nothing to do with the arrest, and is not even aware of it. He said those who served the warrant would be in the best position to respond to questions arising from it.

(We already expelled Mr Menorca. That's enough on the part of the Iglesia. That's the most that can be done as far as his membership in the church is concerned. Now, if he has to face charges, then he should face them. He should face that and not drag us into it because the organization is not the implementing the arrest order.)

In response, Menorca said he understands the position taken by Zabala as he represents the INC and could not divulge any information unless authorized by the leadership.

(They say they have nothing to do with the arrest warrant, the filing of cases in different parts of the Philippines. We all know that members of the organization would not move without the guidance and order of the leadership.)

Menorca's lawyer, Trixie Cruz-Angeles, arrived past 10 am at the MPD Station 5, where Menorca was being held.

Angeles said they were surprised by the arrest, adding that they were not given any notice about the libel complaint against the former minister.

The lawyer added that Menorca's experience in Sorsogon, where he was allegedly abducted supposedly on orders of top INC officials, was always at the back of the family's mind.

Menorca and his family are seeking a writ of amparo to protect themselves, citing continued harassment and threats against them.

In an interview on dzMM on her way to Station 5, Angeles expressed confidence that the court would grant a request for Menorca to give his testimony on another day, if he would be unable to get to the CA for the scheduled hearing.

Asked what would happen if Menorca would not be able to make it to court, Angeles said: "We will ask the court for another setting,  considering that this is a matter beyond our control. And we have no doubt that the court, which is a fair court, will grant it."

She added" "Right now, we have to make sure that he's safe. The reason why this case reached the Supreme Court is this is a case for habeas corpus and amparo precisely to protect him from the possibility that he may be harmed. And the people he had accused of attempting to harm him are agents of the law. So even the members of the police would understand this."

In Tuguegarao, Cagayan, former justice secretary Leila de Lima questioned how the police served the arrest warrant on Menorca. The senatorial aspirant told Rappler that policemen should be in uniform when they conduct such operations.

De Lima, who was in Tuguegarao on Wednesday for a forum with students of Cagayan State University, said the two policemen who tried to arrest Menorca violated their own operational guidelines in serving warrants of arrest against the accused.

"They should know that because when I was in the CHR (Commission on Human Rights), we helped the PNP (Philippine National Police) in crafting those operational guidelines,” the former CHR chair said.

She said the guidelines were crafted because of increasing complaints of police abuses in the country. – with reports from Katerina Francisco and Raymon Dullana/Rappler.com