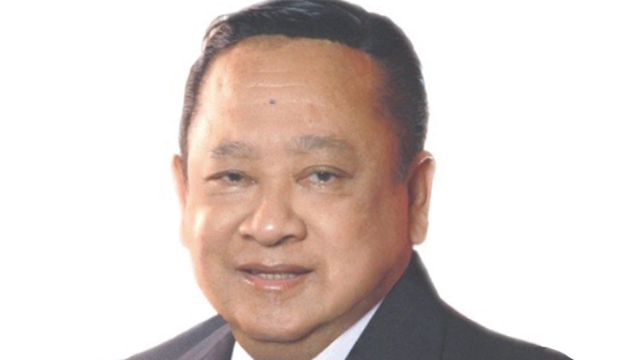 “My dad passed away peacefully this morning,” he said. “Lucky to be at his bedside when he died.”

According to his son, instead of flowers and mass cards, his father would have appreciated donations to the Governor Roque and Manuela Ablan Foundation, Incorporated.

Born in Laoag City on April 22, 1932, Ablan is the son of former governor Roque Ablan Sr.

Ablan’s political career started when he became an Ilocos Norte provincial board member in 1963.

In 1968, he was elected to represent the First District of Ilocs Norte in Congress, serving two terms until 1972.

A close ally of then President Ferdinand Marcos, Ablan served as his special adviser from 1973 to 1980. In fact, according to his resume online, Ablan led the roster of 49 congressmen who “sponsored and flew” to Hawaii to return the remains of the late dictator to the Philippines.

Ablan returned to Congress and served as Ilocos Norte 1st Distrcit Representative  from 1987 to 1998. In 1998, Ablan ran for provincial governor but lost to Ferdinand “Bongbong” Marcos Jr.

In 2001, he was elected to Congress again and served until 2010. As a legislator, he authored several laws such as Republic Act 9255 which grants children born out of wedlock the legal use of their father’s name, and Republic Act 9189 which allowed absentee voting for overseas Filipino workers, among others.

Ablan also chaired committees on dangerous drugs, housing, and inter-parliamentary relations, among others, in different congresses.