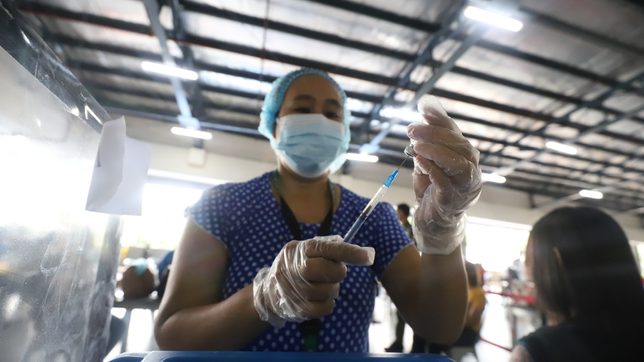 Facebook Twitter Copy URL
Copied
The COVID-19 inoculations will be piloted at the St. Paul’s Hospital Iloilo, based on the Department of Health’s recommendation

After more than a month of pleading with the national government, the Iloilo City government announced on Monday, October 25, that it will finally launch a pilot COVID-19 vaccination for minors aged 12 to 17 years on Friday, October 29.

The COVID-19 inoculations will be piloted at the St. Paul’s Hospital Iloilo, based on the Department of Health’s recommendation.

As of October 22, around 5,894 minors were pre-registered for vaccinations by their parents or guardians in designated registration sites.

Iloilo City Mayor Jerry Treñas told Rappler that the Inter-Agency Task Force for the Management of Emerging Infectious Diseases (IATF-MEID) had given them the green light in a recent meeting.

The target for these vaccinations would be between 150 to 250 minors during the piloting. Parents or guardians may accompany their children, and may even get their own COVID-19 vaccines if they are still unvaccinated.

The vaccine program for minors will be later expanded to five sites, all near hospitals:

Pre-registered minors and their parents will receive information on the vaccine and be asked to sign respective consent forms.

Minors with co-morbidities should present a medical certificate from their pediatrician or their respective district medical doctors.

Pfizer and Moderna vaccines, which are the only ones authorized by the Food and Drug Administration so far, will be used for the minor vaccinations.

Treñas said that they are still expecting Pfizer vaccines from the national government this week.

The mayor has written several times to the COVID-19 Inter-Agency Task Force for the Management of Emerging Infectious Diseases to fast-track the vaccination of minors. – Rappler.com